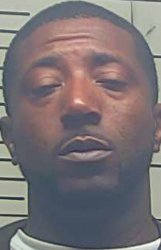 A Starkville man has been arrested in Clay County after he allegedly shot at a home and vehicle last week.

Franklin Young, 35, has been charged with aggravated assault and shooting into a dwelling, according to a Clay County Sheriff's Office press release. The release said deputies were called to the shooting on Walker Gin Road in western Clay County on May 14, where investigators discovered two bullets had been fired into the home and one into a vehicle parked at the residence. Five people were in the home at the time of the shooting but were not injured.

Officers with Mississippi Department of Corrections later arrested Young in Oktibbeha County and took him to Clay County Jail, the press release said.

Clay County Sheriff Eddie Scott said the incident appears to be domestic, though he noted the investigation is ongoing, according to the press release. Anyone with information on the case is asked to call CCSO at 662-494-2896 or the Golden Triangle Crime Stoppers at 800-530-7151.

Young is currently on probation for a drug conviction in Oktibbeha County in 2014. His is in custody at Clay County Jail on $50,000 bond, with a hold from MDOC.