All five Panthers starters Monday were seniors, while the Lions fielded a quintet of sophomores.

The Panthers can win their second state title ever and first since 2004 by beating Ingomar on Thursday. 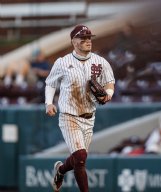 STARKVILLE -- Mississippi State will wait one more day before returning to the diamond.

Over the weekend in Texas, the Mississippi State softball team faced perhaps the toughest competition it has seen since its 2019 Southeastern Conference slate.

STARKVILLE -- Standing in the right field grass just shy of a Ford advertisement adorning on the wall at Dudy Noble Field, Tanner Allen peered down at the wording on his glove.

The Rams still reached the state title game for the first time in school history.

STARKVILLE -- Pushing No. 6 Alabama to the brink, Mississippi State turned to its two seniors on senior night in the most crucial moments, hoping for a storybook ending.