Huebner resigns as president of EMCC 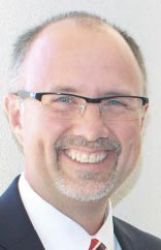 "Dr. Huebner resigned Monday night at our regular board meeting," Moore said. "His formal effective end date is June 30, but he has leave that he's taking. After (Tuesday), he had no more duties with EMCC."

Moore said that while Huebner did not state a reason for his resignation, he understood that the decision was prompted by Huebner's status as a finalist for the Meridian Community College presidency.

Meridian Community College announced on April 24 that Huebner was one of the five finalists for the job and would be the last to interview for the position on May 30.

"My feeling was that (Huebner) felt like it was best for him to resign because he felt there was a better opportunity for him at Meridian Community College, if he were to get the position," Moore said.

Moore said he has called a special meeting of the EMCC board for Monday as the board considers the process of naming an interim president along with discussing plans for a search for a permanent president.

Huebner, who has been president at EMCC since 2015, was not available for comment.