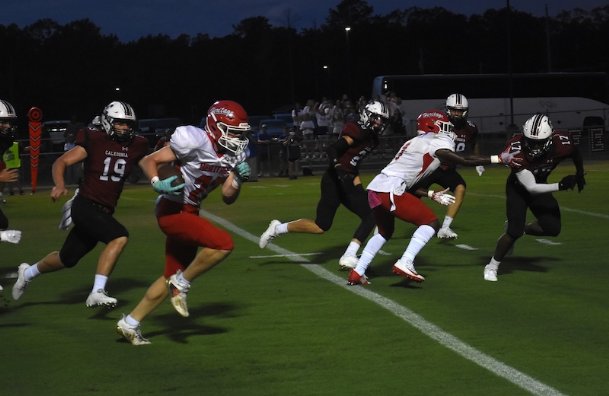 Heritage Academy wide receiver Trey Naugher (23) takes a screen pass for a touchdown Friday night against Caledonia. It was the first of Naugher's three touchdowns in the Patriots' 28-21 win. Photo by: Garrick Hodge/Dispatch Staff

CALEDONIA -- Wesley Miller needed to think about something else.

The Heritage Academy junior's fumble on a punt return in the second quarter quickly led to a touchdown for intra-county rival Caledonia to tie Friday's game at 14-14. Miller had only one option: get the play out of his mind.

Suffice it to say he succeeded.

Miller powered in from 3 yards out for the go-ahead touchdown in the fourth quarter, made a key tackle on Caledonia's final drive and broke up a pass that would have been trouble later in the possession.

His clutch plays gave Heritage Academy a 28-21 win over Caledonia on Friday -- and solidified his status as one of the Patriots' best players, head coach Sean Harrison said.

"Last week, he put us on his shoulders, and right there in crunch time, you saw it again," Harrison said. "He keeps coming through for his teammates."

Without Miller's efforts, there's no telling how Friday's game would have turned out. Heritage Academy and Caledonia each scored seven points in the first, second and third quarters before Miller's rushing score stood as the only score of the fourth quarter.

It gave the Patriots the edge in a rivalry contest among the best in the area, letting them claim county supremacy once again.

After showing that in a 32-12 win over Caledonia en route to a 14-0 season and an MAIS Class 5A title last year, the Patriots got to prove that again Friday night on the road.

Sophomore quarterback Mack Howard was strong again for Heritage Academy, going 22 for 32 for 290 yards and three touchdowns -- all to junior Trey Naugher.

Naugher bobbled a screen in the first quarter before recovering for a 25-yard touchdown. In the second and third quarters, he added 3-yard touchdown catches from a quarterback he's been close with for years.

"He's one of my best friends," Naugher said of Howard. "I love playing with him."

But even with as much impact as Naugher had on Friday's game, a different Heritage Academy receiver had even more. Mitchell Woodard made a leaping catch on the left sideline in the third quarter that led to Naugher's final score of the day, made a fourth-down snag to keep the Pats' final scoring drive alive and intercepted a pass on the following drive to put an end to Caledonia's chances Friday.

It was another standout performance for Woodard, a junior who has gotten better and better with every game.

"Mitchell's been a heck of an athlete for us," Harrison said. "So proud of him that he got to end that game."

Harrison credited Woodard for the fourth-down catch that kept the Patriots' biggest possession of the night alive. With 5 minutes, 25 seconds to go, the receiver fought through pass interference to snag a fourth-down throw off the ground in the red zone.

Had the catch (and the flag) not happened, Harrison said, "it'd have been interesting." Caledonia would have gotten the ball back with more than five minutes to go, plenty of time to mount a game-winning drive and kill the clock in the process.

Instead, Heritage Academy had first and goal at the Caledonia 5, and the Pats cashed in. Miller ran for two yards on first down, then ran toward the front right pylon for a 3-yard score on second down. On the way to the end zone, he trucked a Caledonia defender hard enough to give himself a stinger in his arm.

It more than atoned for his costly mistake in the second quarter as Caledonia attempted to pin Heritage Academy deep. Miller caught Logan Powell's punt near his own goal line and was quickly met by Caledonia senior linebacker Brandon Chrest, who wrested the ball out of Miller's grasp and fell on it at the Patriots' 9-yard line.

"I was honestly expecting a fair catch right there," Chrest told The Dispatch. "As soon as I saw him not wave, I started to speed it up and somehow got to the ball and plucked it out."

Three plays later, Jayden Henderson powered in for a 1-yard score to tie the game at 14-14. He was the second Caledonia running back to score Friday, and he wouldn't be the last.

Curtavis Johnson put the capper on Caledonia's drive early in the third quarter with a 2-yard touchdown, the last of four straight runs by Johnson from the Pats' 14.

It was another successful showing for Caledonia's triple-option "flex-bone" offense, which worked to perfection on the first possession of the game as Darrius Triplett took a pitch 64 yards for a score.

Heritage Academy went three and out right after the touchdown, which could have been a momentum-killer, Harrison said.

"It would have been really easy to fold there, and we didn't," he said. "We keep taking that step."

Where the Patriots could compensate was the passing game, where they found success despite a potent Caledonia pass rush. Howard got up slowly and limped around after one of several sacks in the third quarter, but his coach said it wasn't anything out of the ordinary.

"He's used to getting hit," Harrison said. "He's good. You get the hell knocked out of you for two hours, that happens."

And despite getting jostled around all evening, Howard still got the chance to impose some pain of his own on the Caledonia secondary. He carved up the defense on several well-designed screen passes and managed not to turn the ball over once despite a few missed connections.

After Caledonia quarterback Daniel Wilburn was called short on a fourth-down scramble to the Pats' 23, Howard took over and immediately found Naugher for 23 yards to midfield. One play later, a screen to Braden Davidson went for 27 yards.

Columbus transfer Jaylan Stewart converted a first down before Howard found Woodard on fourth down to keep the drive -- and perhaps the night -- alive.

Miller scored two plays later to give the Pats the lead, saved a big play by taking down Triplett on Caledonia's next drive and broke up Wilburn's pass intended for Triplett on the very next play.

Woodard grabbed his pick on fourth-and-5 with less than a minute left, and Heritage Academy went into victory formation with its third win of the season.

"It was a hard fight," Miller said. "We just had to get through it."