White House Chef Andre Rush, seen preparing a meal in this Facebook photo, is a Columbus native who became a chef to presidents and Joint Chiefs of Staff during his Army career. He does 2,222 push-ups per day to raise awareness of veterans' issues. Photo by: Courtesy photo

On Thursday, he was sitting outside Helen’s Kitchen in Columbus, musing with his old classmate Kabir Karriem about life at Lee High School, where they both were members of the last graduating class in 1992. Both played football — the aptly named Rush was a running back and Karriem played on the defensive line. They also took a class together called industrial art, but neither could remember “what that class was even about.”

“I remember he got in trouble a lot,” Rush said of Karriem.

Then Rush crossed his arms — each sporting a 24-inch bicep — and leaned back in his chair.

“The main thing I want people to understand is you can do anything,” he said. “Even if you’re just a guy from Columbus, Mississippi.”

Rush ought to know. In a 24-year Army career, he built a resume fit for a Hollywood movie.

He was inside the Pentagon on Sept. 11, 2001, when a terrorist flew a plane into part of the building. He was later wounded in combat in Iraq. Since then, he has become a staunch advocate for suicide prevention, especially among returning soldiers suffering from post-traumatic stress disorder.

He’s an avid student of kinesiology, a personal trainer and a master ice carver.

Oh, and Rush, a chef, has prepared meals for the U.S. president and dignitaries at the White House for the last four administrations.

Even so, Rush didn’t become certifiably famous until this summer, when a photo a reporter took of him preparing a Ramadan meal for President Donald Trump hit social media and went viral. Rush’s arms caught everyone’s attention, and suddenly the “jacked chef” was in high demand.

“I get a lot of folks contacting me on social media about how I got my arms to look like this,” Rush said. “But now I also get parents reaching out to me about their kids wanting to be chefs.”

Now, Rush is writing an autobiography and cookbook, expected to be published next year. He’s even poised to star in a new television show titled “Chef in the City,” in which he intends to revisit his roots.

“I’m going to find a way to incorporate Columbus into one of the episodes,” he said.

From cook to chef

Rush’s journey to the White House kitchen started in his own.

The youngest of eight children, Rush often helped his mother prepare meals for their large family.

“My mom was my foundation,” he said. “The most connected you could feel with your family growing up was sitting around the table for meals. I loved that feeling.”

After Rush joined the Army in 1993, he found himself in the kitchen again as a cook. He was so good at it he landed a job three years later at the Pentagon cooking for the chairman of the Joint Chiefs of Staff.

By 1997, he was recommended to join the White House cooking staff, and he spent several years doing both jobs part-time.

“To even be considered for that job, you have to have a Top Secret security clearance and several recommendations from the right people,” Rush said. “Once you get in the door, you have to work your butt off. You have to prove yourself in a place where everyone else already has.”

And he did, first for Bill Clinton, then George W. Bush, Barack Obama and now Trump.

That’s two Democratic and two Republican administrations in a city where politics is a blood sport. Politics, though, have little place in the kitchen.

“They know who you voted for and whether you voted for them. They find that out,” Rush said of the presidents. “But if you’re good at your job, none of that matters.”

In the White House

Up until about two months ago, Rush worked at the White House two to three days a week.

Those days started about 6 a.m. and often ended at 11 p.m. The work, although rewarding, is meticulous and sometimes grueling.

“The cooking is the easy part,” he said. “Logistics are the hard part.”

First, the kitchen is quite small, contrary to what people may believe of the grandiose White House. Then there’s months, if not a year’s worth, of preparation for specific events.

Depending on the dignitaries visiting, or the nature of the occasion, dietary or religious restrictions must be considered. Then there’s presentation, possibly the most tedious and time-consuming element, especially if the dining party is large.

On the more personal side, dealing successfully with the presidents involves learning what they like and only giving advice — such as health and nutritional — when asked.

“They like everything I cook,” Rush said, laughing. “I’m a pretty humble guy, but I cook extremely well. I also cook to each president’s palate, and every one of them is different.”

He said Trump’s palate was the simplest of the four presidents he’s served, which he found surprising for the magnate who has eaten all over the world. Obama’s and Clinton’s, on the other hand, were the most “open palates,” which allowed Rush to be more creative and experiment with more dishes.

President Bush, he said, liked barbeque and famously banned broccoli from the White House and Air Force One.

When asked, Rush always jokes that every president likes chicken. He admits, though, that observation doesn’t reveal very much.

“Everybody likes chicken, and I can make chicken a million ways,” he said.

Rush doesn’t talk much about his military service. Not the specifics, anyway.

He’ll tell you he was wounded in Iraq while part of a security detail, but that story pretty much ends there. He’ll share that he was on recovery detail at the Pentagon after the 9/11 attacks, where he lost several of his buddies he had been training in the gym while he was a chef there — the “wake-up call” that inspired him to volunteer for overseas combat.

But as it relates to his PTSD, he’s a bit more open as he seeks to support those who also suffer from it.

As part of Mission 22, which raises awareness for the average of 22 U.S. veterans who take their own lives each day, Rush does 2,222 push-ups each day. He also uses his growing social media influence to raise awareness for veterans’ causes, and runs a program called Cooking to Cope centered on helping soldiers with PTSD by teaching them how to cook with their families.

For Rush’s own coping, 9/11 has maybe been the hardest obstacle to overcome. Each year, the day drove him into seclusion as he remembered what he experienced and the friends he lost.

This year, though — for the first time since the terrorist attacks — Rush spent Sept. 11 in the public, working with the USO Warrior and Family Center at Fort Belvoir, Virginia.

“It still haunts me,” he said. “But this year, I just got out doing my advocacy.”

Karriem kept up with his classmate on social media in recent years, and after Rush’s bicep photo went viral, he asked Rush to visit Columbus for the 30th anniversary of Helen’s Kitchen — the northside restaurant Karriem runs with his brother, Kamal, and their mother, Helen.

Now a state representative, Karriem remembers Rush as a scrawny youngster with a penchant for lifting well above his weight in the gym.

Rush is a mountain of a man today, both in physical stature and in the reputation he has built on a national scale.

That kind of role model, Karriem said, is something he hopes gets the attention of every young person living in Columbus.

“Any time someone from Columbus makes it to that status, it’s awesome,” Karriem said of Rush. “To see him accomplish what he has, I’m so proud of him. We all should be.” 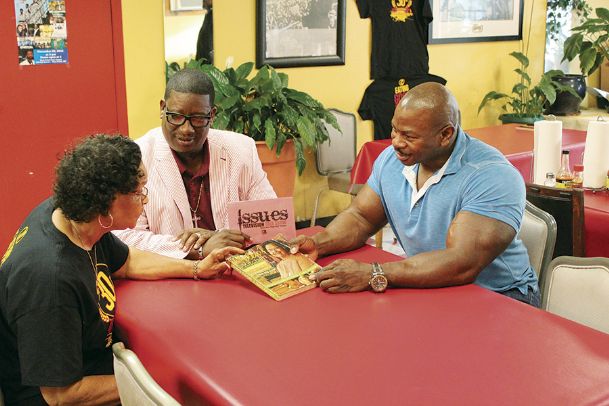 White House chef Andre Rush, right, talks with Helen Karriem and Rick Mason on Thursday at Helen's Kitchen on 15th Street North. Rush, a Columbus native, is an Army veteran who has cooked for the president since 1997. He is now pursuing a book deal and is slated to star in his own television show next year. Photo by: Zack Plair/Dispatch Staff