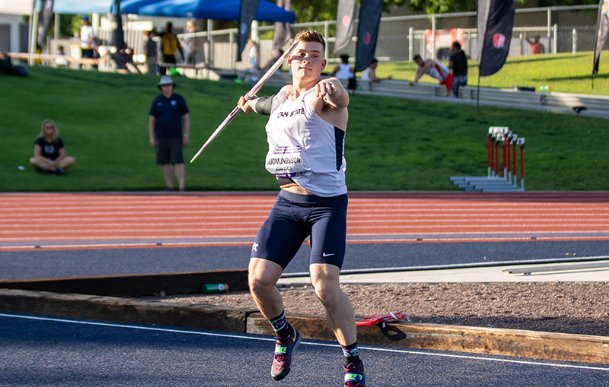 When Sindri Gudmundsson looked for a transfer destination this summer, he already had one in mind: Mississippi State, a.k.a. Jav U. Photo by: Photo courtesy of Wade Denniston/USU Athletics

Sindri Gudmundsson has seen up close and personal what Mississippi State's javelin throwers are capable of.

At the NCAA championships in both 2018 and 2019, the only thing standing between Utah State's star Icelandic thrower and a national title was the Bulldogs. Several of them.

Gudmundsson finished behind Mississippi State's Anderson Peters and Nico Quijera in 2018, settling for third. The following year, he took fourth behind an all-Bulldog podium of Peters, Curtis Thompson and Tyriq Horsford.

So when Gudmundsson looked for a transfer destination this summer, he already had a destination in mind: Mississippi State, a.k.a. "Jav U."

"If you can't beat them, join them -- and beat them," Gudmundsson said. "That's kind of my mentality: They've got this great corps of throwers, and I'm going to join them and eventually hopefully beat them."

Of the four Bulldogs who finished ahead of Gudmundsson at NCAA championships, only Horsford is still on the roster. But with the prolific Icelandic thrower, who officially signed with the Bulldogs in July, in the fold, Mississippi State can be just as good come spring 2021 -- or better.

Associate head coach April Thomas, who leads the school's "Jav U" program, says she expects the addition of Gudmundsson to help the Bulldogs' javelin throwers remain an elite group.

"I think it's special knowing that Sindri even considered us and wanted to come here, so that makes it even better," Thomas said.

Going for gold -- and a master's degree

Gudmundsson said he had two main reasons for coming to Starkville apart from getting to compete with several talented throwers like Horsford.

First, he'll get another season to compete after losing his 2020 outdoor season to COVID-19. Gudmundsson graduated from Utah State with his bachelor's in accounting this year, but he'll have a chance to use his final season of collegiate eligibility to throw the javelin for the Bulldogs.

And when he does, he expects to edit his resume from three-time first-team all-American to four-time. Of course, winning an NCAA title outright would be welcome, too.

"I've always had it in my mind that I wanted to win nationals, and I think coming here to Mississippi State would be the best option for me to reach that goal," Gudmundsson said.

His other principal reason for coming to Starkville is to start his master's program in management information systems. Gudmundsson, who minored in MIS at Utah State, needs 30 to 33 hours to complete the master's, which will take him one and a half to two years.

And since he'll only have one season of competition, he won't be subject to major technique changes at the hands of the Bulldogs' staff, which helps him feel more at ease. Substantive improvements can take much longer than a year, Thomas said.

"I tell people I like to think I'm a good jav coach, but I'm not God," Thomas said. "I can't get somebody who's never thrown jav a day in their life and within a year's time turn them into an 80-meter javelin thrower."

Lucky for her, Gudmundsson is already part of that elite group. He owns a career-best mark of 80.91 meters -- a school record at Utah State. (For comparison, Peters' personal best is 87.31 meters, and the world record is 98.48.)

Those, meanwhile, who hurl a javelin for the first time aren't likely to survive with their dignity -- or their ligaments -- intact.

"They'll pick it up and try to throw it like a baseball, and there goes your shoulder. There goes your UCL," Thomas said. "It's definitely tricky."

Moving on to Mississippi

It was the same ligament, in fact, that plagued Gudmundsson before his career at Utah State. In May 2015, he tore the UCL in his right elbow, and a few months later in New York, he had Tommy John surgery -- a procedure named after a former Major League pitcher and usually exclusive to big league hurlers.

Gudmundsson couldn't throw a javelin for seven to eight months; it was a full year and a half after his injury until the pain was gone. But he said the shoulder and arm strengthening exercises he performed helped him build stability and reinforced the steely mindset he'd always had for himself.

"In my head, I was always going to get through it," Gudmundsson said.

And he did, returning in 2017 for his redshirt freshman year. He was named to the all-America first team three straight times, the first Utah State athlete to do that since James Parker hurled the hammer for the Aggies from 1999 to 2001.

But when Gudmundsson was notified that Utah State wouldn't renew scholarships for graduating seniors, it solidified his decision to move on.

"They made it so easy for me to realize that I wanted to come here," Gudmundsson said of Woods and Thomas.

So did the school spirit Gudmundson saw ingrained in the city of Starkville, which took the Aggies' support in Logan to another level.

"Right here, you see everybody rocking Mississippi State, and I think that's great," Gudmundsson said. "It definitely made me excited when I got here."

Gudmundsson said losing his senior season but finding a chance to play at Mississippi State was his first "blessing in disguise."

And before the fall semester even started, Gudmundsson faced another setback that was, in ways, a second one.

On June 2, he developed appendicitis, had to get his appendix removed and spent the next eight weeks out of commission. It was a rare respite for Gudmundsson.

"I haven't really gotten any time off since I was about 12 to rest and just do nothing," he said.

But rather than a headache, the down time proved effective -- the lower back strain that had bugged the thrower for over a year finally healed.

"I think that was kind of good for me," Gudmundsson said of his time off.

Now, he and the Bulldogs are back in action as they begin ramping up for the spring outdoor season. Thomas said her conditioning program includes flexibility training, some weightlifting and the occasional run -- but only short sprints, she said.

She said she's been excited to get back into the swing of things after the longest layoff she can remember in a coaching career of over a decade.

"I'm ready to get back at it," Thomas said. "The break's over; it's time to make some more magic."

Gudmundsson is ready for that, too. Though he said the Mississippi humidity made him sweat more than ever when he and Estes -- a nurse at OCH Regional Hospital -- moved into their third-floor apartment, the heat will allow him to throw outside for much more of the year than snowy Logan.

With more time to prepare, a fully healed back and a cadre of talented throwers around him, Gudmundsson said he can't wait to get back to competition for his final college season.

"I think it's going to be a really exciting year," he said.