Heritage Academy girls soccer has been building to this season for years. The Pats hope they're ready for it. 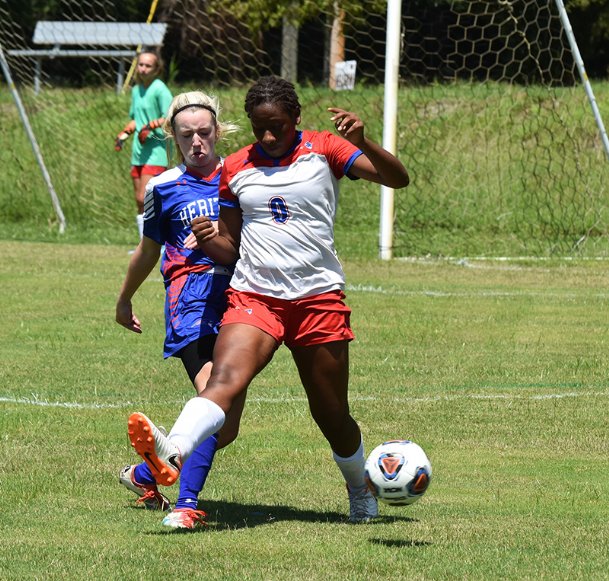 Heritage Academyâs Sarah Curtis, left, battles for control of the ball during a high school girls soccer match last season against Marshall Academy at the River Walk Soccer Complex in Columbus. The Patriots are still on pace for an on-time start for the season opener on Aug. 3. Photo by: Garrick Hodge/Dispatch file photo

When the Heritage Academy girls soccer team finished above .500 last fall but failed to qualify for the playoffs, the Patriots were disappointed.

Coach Tom Velek said the dichotomy reveals a lot with regard to the expectations within the program.

"I think it says a lot when you have a winning season and people are pissed off," Velek said.

Now, last year's junior-heavy team has become a senior-heavy squad this fall. In what Velek called a "bubble at the top," the Patriots have seven seniors, just one junior and a sole sophomore. That means the high expectations have only gotten higher.

"They're going to have to step up in a way that they haven't in the past," Velek said of his seniors.

Haven Tuggle, Sarah Curtis, Kelly Bell, Hanna Hardy and Carly Rogers have all played for Heritage Academy since Velek took over when the five were in eighth grade; Tuggle, Curtis and Bell were on Velek's first Columbus United U8 Development Program girls team when they were 7.

"Seeing this group graduate is meaningful, but it's also kind of the thing that you've been building for," Velek said.

Back when this year's seniors were eighth graders, Velek thought, "Man, if we can keep them all playing, in four years it's going to be huge."

That time has come, and Velek said he tries to impress upon his seniors the responsibilities they face this fall.

"'You've been working at this for a long time," Velek tells them. "Make your senior year extraordinary. You'll never regret it. You might regret not working hard, but you'll never regret putting in everything you have.'"

That is, he cautioned, if the Patriots even have a season.

As of July 15, things are on as normal for Heritage Academy, which is set to kick off the 2020 campaign against Starkville HomeSchool on Aug. 3. Velek said the Midsouth Association for Independent Schools has said nothing to the contrary so far, and he's preparing for a season to be played as normal.

But Velek has his own doubts, and reading a Yahoo! Sports article titled "Time to face reality: 'No one is playing college football in the fall'" somehow didn't help them.

"If there's not college football, there's probably not going to be high school soccer," he said.

So far, there still is, and the Patriots have been training for a "deep" schedule featuring two games against Columbus Christian Academy, two against Starkville HomeSchool and an overnight trip to face Laurel HomeSchool and Presbyterian Christian on Aug. 6-7.

"I'm looking forward to Lamar just so we can have a really good game against them this year and give them all we've got," said Rogers, a defensive midfielder.

Apart from the overnight trip and a district game at Magnolia Heights, the Patriots won't have to travel more than 90 minutes -- Velek's intention and not an uncommon one. Northpoint Christian School in Southaven was slated to come to Columbus to play the Patriots on Aug. 14, but Northpoint canceled the game because the Tennessee Association of Independent Schools won't permit such a long trip.

So far, Heritage Academy has been careful with temperature checks and COVID-19 checklists, but Velek knows changes could come soon. If so, they'd come at a cost for the Patriots' seniors, who are at the 'pinnacle' of their high school careers and could see their final season taken away.

"We're just hoping and praying that we get to play," Velek said. "To miss it would be terrible."

With the promise the Patriots hold, disappointment would be natural should the season they've been preparing for fail to take place.

The team's seven seniors and a crux of talented younger players will give Heritage Academy a solid foundation on the field, particularly on the back line. Though Velek said the Patriots have revamped how they attack and make their runs off the ball on offense, their strength lies in defending.

"We have a strong defense this year, and I think it's really going to help us," Rogers said.

Bell will be a leader on the back line, where she will be joined by eighth grader Sophie Starks and ninth grader Chloe Boyd. Ninth grader Reagan Merchant -- now in her third season as a starter -- and Hanna Hardy will contribute, though both will be moved from their normal position as outside backs; Columbus High School transfer Destinee Flowers will also join the picture on defense.

"I think Destinee's going to contribute in a big, big way and really help us in the back with some athleticism that we may have been missing," Velek said.

Senior goalkeeper Haven Tuggle joins Hanna and Bell as a leader for the Patriots on the defensive side of things. Velek has coached Tuggle since she was 7 and ranks her among the best keepers in the state, while the players in front of Tuggle can speak to her talent and leadership qualities.

"She knows what she wants on the field, and she'll tell us without a doubt where she wants us, how she wants us to play," Rogers said. "She takes good control of the team."

Curtis, also being moved to a new position, will play a big role in leadership as well, and Velek said sophomore Caroline Milan and freshmen Karen Hall and Emma Britt are expected to step up.

"If these are your goals, this is what you need to change," Farmer told the Patriots.

Change, they did, and Heritage Academy feels confident about the season to come.

"I think we're going to have a good season," Rogers said. "Definitely a little bit to work on, but I think we'll have a really good team -- really strong."

2. Football has been EMCC's 'livelihood,' but Lions must adjust to a new way of life for now COLLEGE SPORTS

3. EMCC opts out of fall football season because of virus COLLEGE SPORTS