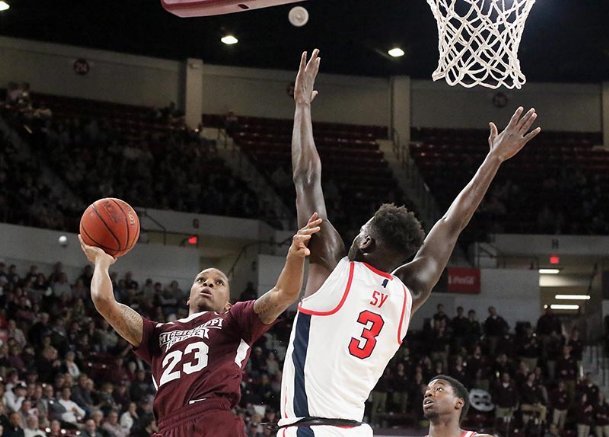 Tyson Carter averaged a career-best 13.9 points his senior season at Mississippi State, shooting 40 percent from the floor and 32 percent from beyond the arc. He amassed 1,352 career points and played at least 32 games in all four seasons at MSU. Photo by: Jim Lytle/Dispatch file photo

He's not short on confidence, either.

"I thought it was a good opportunity to make a name for myself on a professional level," the former Mississippi State standout guard told The Dispatch.

"It came about because they watched the season last year, and I thought it was a good opportunity," Carter said.

The Starkville native is expected to report to the team's training camp sometime in August. Despite living in Starkville all his life, Carter said he doesn't anticipate being overwhelmed by living in a foreign country.

"Not really, because I've been planning for this moment for a while," Carter said. "I knew I couldn't stay forever. I've dreamed of being a professional, so I knew that I was going to have to leave soon.

"I don't know too much about Greece; I've never been there. But it should be pretty fun. There might be a little bit of a language barrier right away, but I don't think it'll be too big of an adjustment."

Carter said he hasn't been in contact with any of his new teammates yet but hopes to reach out in the coming weeks.

The 6-foot-4, 175-pound guard averaged a career-best 13.9 points his senior season at Mississippi State, shooting 40 percent from the floor and 32 percent from beyond the arc. He amassed 1,352 career points and played at least 32 games in all four seasons at MSU.

He and his father, Greg, are the only father-son duo to each score at least career 1,000 points in the history of the Southeastern Conference. In his junior season, Carter helped lead the Bulldogs to their first NCAA tournament berth for the first time in a decade.

Carter never got to fully finish his career with MSU, as the Southeastern Conference tournament was canceled a day before the Bulldogs were supposed to take the court because of the COVID-19 pandemic. In what turned out to be his final performance as a Bulldog on March 7, MSU throttled Ole Miss in a 25-point win in which Carter received a curtain call on senior night with 3 minutes remaining.

He capped off a special goodbye to the Humphrey Coliseum faithful as he kissed the big M located at center court before jogging off to the bench.

But now, he'll be suiting up for a new team.

"I want to be as successful as I can be at any level," Carter said. "Whether that's being a professional overseas or coming back to the U.S. and playing in the NBA. I just want to be the best player I can be."