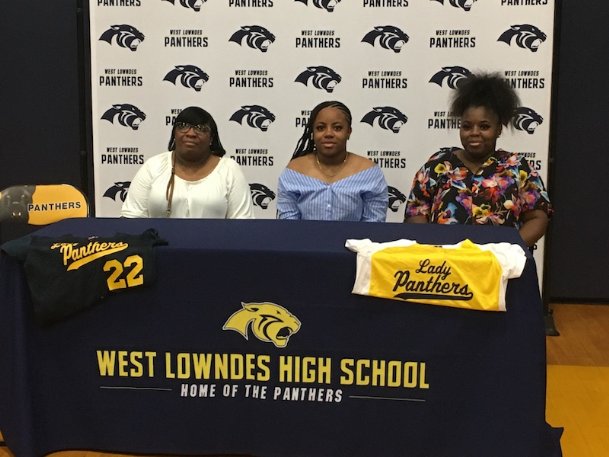 Takara Givens, center, signed her letter of intent to play softball at Mississippi Valley State on Wednesday. Givens, a senior this spring, only got to play one game for the Panthers before the coronavirus pandemic ended the season. Photo by: Theo DeRosa/Dispatch Staff

In the past few seasons, West Lowndes softball coach Anthony King has often taken his team to watch Mississippi State play at Nusz Park in Starkville. Several times, the Bulldogs were matched up against Mississippi Valley State.

Now, if King and the Panthers come back to watch the same matchup, they'll recognize a familiar face on the field.

Givens, too, said she intended to go to Coahoma but eventually changed her mind and settled on the Division I program instead.

"It means a lot to me," she said. "I never expected to go off to college and play softball at the next level."

That became a reality for the second and third baseman after a standout junior year in which she really made a name for herself. But Givens -- who, coach Anthony King said, is a "natural" with a strong arm, a good bat and solid fielding skills -- only got to play one game this spring, a loss to Columbus, before the COVID-19 pandemic shut her senior year down.

"I was really looking forward to playing this season before I got the bad news about the coronavirus," Givens said.

King said Givens will likely play second base more than third at Valley, where she plans to major in athletic training. Givens profiles as a leadoff hitter, King said.

"One thing's for sure: She will be a fan favorite," King said. "Everybody sees those little legs moving, and they just want to root for her."

The coach said fans of the Devilettes will be pleased by the effort Givens will put in when she gets to Itta Bena.

"She'll do an outstanding job, and we're so proud to have her going down to Valley," said King, who has coached the Panthers for four years.

Givens is proud of herself, too, and she can't wait to get down to see campus and start her college career.