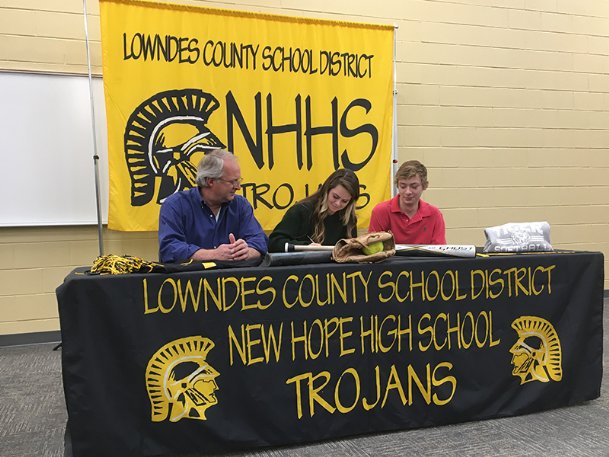 Now retired, Taylor, then the head softball coach at New Hope High School, welcomed Starkville High transfer Charly Clanton into the fold for her sophomore season. Right away, he could tell.

"When she came here with us two years ago, I knew she'd go somewhere," Taylor said.

Clanton, New Hope's starting shortstop and one of the team's leaders, proved him right Wednesday, signing her letter of intent to play softball at Northeast Mississippi Community College.

A week after her visit to the campus in Booneville, Clanton committed. And despite NCAA Division I interest, she held firm.

"I think when she gets up there and they work with her a little bit, she'll go to the next level," said Taylor, who said Clanton is "definitely" Division I material.

After all, Clanton hit over .400 in her junior season, showed veteran savvy in the field and on the base paths and even pitched when the Trojans needed her.

"I don't know that Charly has a position on the field that she couldn't play if you just threw her out there," New Hope head coach Casey Finch Halford said. "She's just all-knowledgeable about every position."

Over the summer, Finch Halford said, Clanton earned the moniker "our little dirtbag" from the Trojan coaching staff.

"She's gonna be gutsy and get all over the field," Finch Halford said. "She'll be the dirtiest kid on the field, but she's gonna take the next base. She anticipates errors and people being lazy so she can advance."

Clanton has settled right in as a key member of the team's family atmosphere, her coach said. She attends church with the Trojans on Sundays, writes Bible verses on her teammates' arms before games and knows not to let her emotions get the best of her in front of her younger teammates.

"It means so much to me to see her sign," Finch Halford said. "She's a big part of our family."

That family was out in full force Wednesday morning in the New Hope multipurpose room, with softball teammates, classmates and family members surrounding Clanton as she put pen to paper.

"It's nerve-wracking, but I feel loved and honored that they came and thankful that they're here," Clanton said.

That crowd won't be gone anytime soon; Finch Halford said she plans to watch Clanton play at Northeast whenever she can swing it.

The Trojans will be behind Clanton during her senior season, in Booneville and wherever she goes next.

"This is definitely not where she'll stop," Finch Halford said. "She will find a way on somebody else's roster in the future. I don't know that Charly ever has a ceiling to where she's gonna go in this sport."