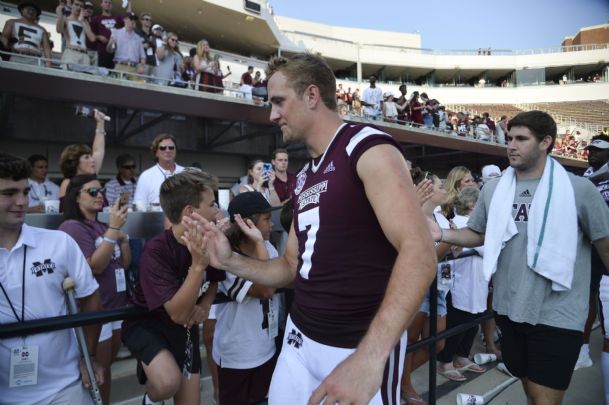 And yet, it can also be so, so cruel.

Saturday was supposed to be Mississippi State quarterback Tommy Stevens' day. The graduate transfer was in the midst of torching the Southern Mississippi secondary and endearing himself to his new fans in his Davis Wade Stadium debut, until a second-quarter upper body injury derailed everything.

Stevens was evaluated in the medical tent on the Mississippi State sideline and later ruled out for the rest of the game at halftime.

After starting 9 of 10 for 105 yards and two touchdown passes, the Indianapolis native was forced to watch from the sideline as his backup, true freshman quarterback Garrett Shrader, finished off MSU's 38-15 victory.

"I don't want to say I'm disappointed for Tommy, but he put so much effort and preparation in," MSU coach Joe Moorhead said. "For him to play the way he has the first two games, I would have loved to see him finish that game off. Because I thought he was going to have a really big day. But he got banged up, and hopefully we get him back soon."

Shrader was more than solid in relief of Stevens, passing for 71 yards and completing 7 of 11 throws. It would have been a much better line than that if wideout Osirus Mitchell hadn't lost a potential touchdown pass in the sun on a deep route. But if nothing else, the Charlotte native showed why Moorhead wouldn't stop singing Shrader's praises in fall camp.

"I saw them looking at Tommy; they wanted to get him on the phone, and he was kind of holding his shoulder," Shrader said. "They told me to start warming up and be ready. ... They told me they were going to hold him out and put me in."

Despite the success from Shrader in a limited sample size, Stevens has thrived in his five and a half quarters played this season. It's clear he's the best quarterback on the roster.

And Mississippi State's next opponent, Kansas State, is no slouch. The Wildcats decimated Bowling Green 52-0 to move to 2-0 Saturday and have outscored opponents 101-14 under new head coach Chris Klieman. MSU may not have needed Stevens to win against Southern Miss, but it might against Kansas State.

Moorhead wouldn't speculate on the severity of Stevens' injury in his postgame press conference but said MSU hopes to have a better idea of where he's at Sunday.

Now, maybe this is all much ado about nothing and Stevens will be ready to go for the biggest game so far of this short season. But since it appears Moorhead would rather tell you his social security number than guess if Stevens will be available for the Kansas State game, guessing the second-year head coach's motive is the hand we've been dealt.

If Stevens can't go, it's likely Shrader would get the nod under center. But that might create another dilemma in itself that would probably merit a separate column. It was understandable Shrader was chosen to back up Stevens Saturday as Keytaon Thompson was playing catch-up after rejoining the team following his brief entry into the transfer portal.

But if Shrader gets the start against the Wildcats and has a bad series or two, how long of a leash will the MSU faithful extend the freshman before crying for Thompson?

For what it's worth, Shrader would have one of the premier backs in the SEC to rely on in Kylin Hill.

"He's a young guy; I was just trying to make sure he's good, not trying to do too much in the moment and help him be the guy he can be," said Hill, who ran for 123 yards in the Bulldogs' win.

The easiest solution is for Stevens to make a speedy recovery, of course. But we'll have to wait for updates throughout the week to see if that's a possibility. Until we get one, the "now what?" saga will continue into the Kansas State kickoff.