Redshirt in tow, Gardner looking to impress in fall camp 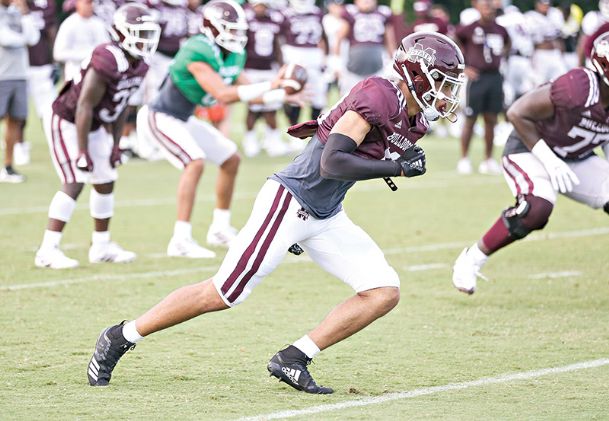 Stepping onto the field during the 2018 opener against Stephen F. Austin, Gardner looked around the bleachers at Davis Wade Stadium.

For the first time in his short Mississippi State career, he was on the field, in uniform, lining up for a live play. Following a standout career at Starkville High School, Gardner was living his dream.

"My head was spinning," he said through a grin. "But as soon as I ran the first play I was good after that."

Though he didn't record a catch in three games played against Stephen F. Austin, Louisiana and Louisiana Tech last year, Gardner figures to be an important depth piece in the MSU passing game in 2019.

And then there's Gardner.

A redshirt recipient in 2018, the 6-foot-4 Starkville High School product offers height just two other receivers -- Mitchell and Guidry -- possess while his 220-pound frame is also larger than either.

Further, though he's inexperienced at the collegiate level, Gardner showed prowess as a pass catcher during his time at Starkville High.

Following a coaching change between his junior and senior seasons, current Yellow Jackets head coach Chris Jones opened up the passing game once his tenure began in Jan. 2017.

As a result, Gardner totaled 35 receptions for 471 yards and nine touchdowns during his final year at Starkville -- leaving Jones wishing he'd arrived earlier.

"If we would have had him last year or this year I think he'd be a kid that could catch 60-70 balls and be one of the best receivers in the nation," he said. "It didn't work out that way but I was fortunate enough to coach him for one year and honestly it was a blessing."

"I think he's doing some good coaching right now and it's only a matter of time till (Gardner) will blow up and have a good year," he said.

That said, with another year in Moorhead's system and the allure of the SEC's bright lights no longer a mesmerizer, Gardner is prepared to make the most of any opportunity he is afforded this season or next in his own backyard.

"It's real cool," he said of being able to play in his hometown. "I'm at home. I'm surrounded by friends and family who want to see me and support me so I'm just basically trying to put on for Starkville."