Burgess holds on for 602 win 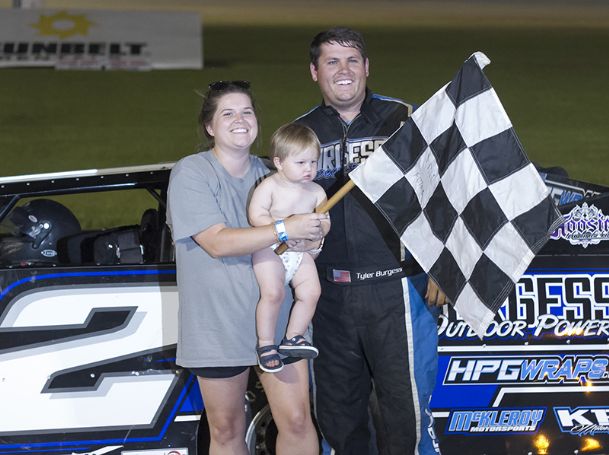 Tyler Burgess celebrates his victory in the 602 Sportsman feature Saturday at Magnolia Motor Speedway. Burgess is joined by his wife, Molly, and son, Mills. Photo by: David Miller/Special to the Dispatch

Tyler Burgess was keeping a close eye on his temperature gauge as he finessed the throttle of his 602 Sportsman Late Model Saturday at Magnolia Motor Speedway.

Burgess, leading the 21-car field after starting eighth, had taken the lead on a lap-8 restart and opened up a sizable lead on the field. But with his car heating to 240 degrees-plus, Burgess worried that he'd have to pull off early.

Burgess held on for the win, his third in his last five races.

"We've been really fast," Burgess said. "Once you get these race cars right, anybody can drive them. It's a lot of fun when you're winning, and I'm glad we got away clean and unscathed."

Shelton finished second and Jamie Pickard finished third after leading a handful of laps early and opening up a two-second lead on the field. But on a lap-8 restart, Burgess jumped from third to first.

Shelton would later move to second on a restart with five laps left.

"I was running third and all I was doing was riding," Shelton said. "But as far as when we took off, [Pickard] chose the outside, so where Burgess started at the middle of turns 3 and 4, it's like all I had to do was turn my wheel and go straight down.

"Of course, after we took off, [Burgess] had a different gear than I did and was pulling away from me a bit. That's my fault. I just didn't make my change like I needed to."

Sudduth breaks seal at The Mag

In fact, he'd often sit out race weekends at The Mag, turning over the driver's seat of the No. 11 Street Stock owned by Steve and Melissa Wright to another driver.

But Saturday, no one could have guessed that Sudduth struggles "in the slick."

Sudduth started on the pole of the Street Stocks feature and led every lap for his first-ever win at Magnolia.

"I'm in hog heaven right now," Sudduth said. "We've been trying a bunch of shocks and springs, and I think we got something for the slick now. We'll just have to find out.

"I'm pretty confident now. The more I race out here, the better we get."

Sudduth hopes to carry his recent run of form to next week's Mississippi Street Stocks Association $1,000-to-win race at Columbus.

"I just want to thank Steve and Melissa Wright for letting me drive it," Sudduth said. "If it wasn't for them, I'd be sitting on the couch right now."

Jason Hollis reached Sudduth's bumper at the checkered flag and finished second after making up considerable ground running the top.

"I needed about five more laps, plain and simple," Hollis said. "But we had a good car."

In other race action, Spencer Hughes started on the poll of the Durrence Layne Late Model feature, led every lap and won the race. Randall Beckwith, Evan Ellis, Chase Washington and Steve Russell rounded out the top 5.