MSU not looking for moral victories at CWS 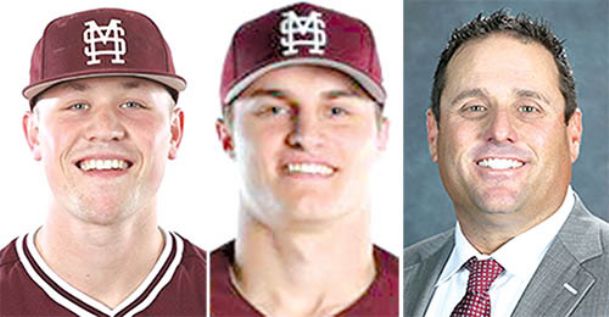 STARKVILLE -- Elijah MacNamee sat at the foot of his locker at TD Ameritrade Park with a somber look on his face.

Minutes earlier, Mississippi State had been eliminated from the 2018 College World Series by way of a 5-2 defeat to eventual national champion Oregon State.

And while the emotion of the moment bore down on him, he was succinct and direct in his response to a reporter.

"We will be here, back next year," he said. "We will win the national championship. Mark my words."

One year later, a part of MacNamee's prediction has already come true. MSU is back in the Omaha, Nebraska proving rounds of the CWS, where the Bulldogs are but a handful of victories away from bringing home the program's first national title.

The differences between last season's team and this year's are distinct. With a steady mix of upper and underclassmen, the 2019 squad is decidedly more experienced at the plate.

Sophomores Tanner Allen, Justin Foscue and Josh Hatcher are all hitting over .300, while Rowdey Jordan has been a steady contributor at .296.

Seniors Jake Mangum, Marshall Gilbert and MacNamee have each made their own respective impact on offense, as well as in the leadership department.

Hunter Stovall was the lone upperclassmen hitter who batted better than .300 who didn't return from 2018 team.

The largest difference between the two is in the pitching department. With the departures of Konnor Pilkington and Jacob Billingsley, MSU had to overhaul its weekend rotation.

Enter redshirt junior Ethan Small who, one season after he finished 5-4 with a 3.20 ERA, has been a revelation as the staff ace. The 2019 Southeastern Conference Pitcher of the Year -- who has also won national pitching honors -- Small is 10-2 with a 1.76 ERA in 17 starts this season. He also ranks first on the national strikeout charts this year with 168.

SEC Freshman of the Year JT Ginn has also made his presence known as the No. 2 starter. Though he has battled arm soreness of late, the dazzling right-hander currently boasts a 3.36 ERA in 16 starts.

Pilkington and Billingsley were far from what Ginn has afforded MSU as neither held an ERA better than 4.45.

Beyond the numbers, it's worth noting the seasonal narrative. Former coach Andy Cannizaro was relieved of his duties early in 2018, leaving Gary Henderson as the interim coach.

With the distractions of a coaching change, the team began the year 14-15 and 2-7 in the SEC. A CWS appearance was far from the players' minds -- even reaching the NCAA tournament looked implausible to that point.

But after rattling off a 17-10 record over the final two months of the season to reach the postseason, MSU escaped the Tallahassee Regional and Nashville Super Regional thanks to awe-inspiring walk-off home runs from MacNamee.

Once in Omaha, the Bulldogs fell short - one win to be exact -- from playing for a national title when they lost to the eventual champion Oregon State Beavers in the semifinal round.

"Last year, we were hung out to dry in early April," Mangum said. "No one had any confidence in us, and we had to prove a lot of people wrong."

In comparison, Lemonis' first year at the helm in Starkville has seen the Bulldogs steamroll their competition. MSU finished the year 15-0 in midweek play and tied No. 5 seed Arkansas for a share of the SEC West Division crown.

Behind a potent offense and a consistent pitching staff, the Bulldogs have lost back-to-back games just three times in the regular season -- all of which came against SEC competition.

Slated as the No. 6 seed in a bracket that includes No. 2 seed Vanderbilt, No. 7 seed Louisville and unseeded Auburn, MSU is not in Omaha for moral victories.

Following a game two win over No. 11 Stanford in the Super Regional that sent MSU to the CWS, Mangum was asked what the differences between the two teams were. Like MacNamee at his locker a year ago, he was to the point.

"This year, we just kind of stayed the course and played well all year," he said. "I can speak for myself here, I did not come back here (for my senior year) just to make it to Omaha. We are trying to win a National Championship. We are one step closer, and we have got work to do."