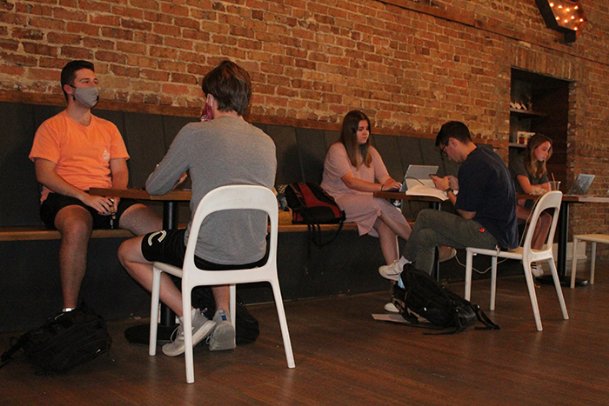 Two days after Gov. Tate Reeves issued an executive order relaxing some restrictions put in place to curb the spread of COVID-19, executives with Eat With Us Group met to discuss how the order would affect policies at the company's restaurants.

The biggest change the governor's order will bring about for those restaurants will only have a moderate impact, sales and marketing director Peyton Scrivner told The Dispatch Wednesday -- employees can allow a few more customers and seat up to 10 customers in one party to a table instead of six. Since the pandemic began, restaurant employees had to split large parties between multiple tables, if they were allowed indoor dining at all.

But the company and restaurant employees were still excited because the relaxed restrictions are another step toward the "old normal" for industries that have struggled since the pandemic came to the Golden Triangle, Scrivner said.

"We obviously, of course, are excited," Scrivner said. "Any (way) we can get more people into our restaurant, we're excited about that. It's nice to loosen it up a little bit."

Reeves issued Executive Order 1522 on Monday, allowing businesses to accommodate up to 75 percent of their capacity pre-pandemic -- up from 50 percent -- provided customers still maintain the Centers for Disease Control and Prevention-recommended six feet of social distance. The order also relaxed restrictions on gatherings, allowing up to 50 people in outdoor spaces where social distancing is not possible and up 100 in outdoor spaces where congregants can maintain six-foot distance between people not from the same household.

While local governments can still enact their own, stricter ordinances if officials feel such measures are necessary to prevent an outbreak, both Columbus and Starkville officials opted to follow the governor's order.

Starkville Mayor Lynn Spruill said she's sure local business owners are "delighted" with the loosening of some restrictions. The order was also a good sign for city officials, who have been concerned about the decrease in sales tax revenue since the start of the pandemic. The board of aldermen voted to raise property taxes for the upcoming fiscal year partly to help shore up a projected $880,000 loss in sales tax revenue.

Both Spruill and Main Street Columbus Executive Director Barbara Bigelow, whose organization works with about 150 downtown and local businesses in Columbus, said they hope the relaxed restrictions will lead to slightly increased traffic in businesses and, in turn, an uptick in sales.

"Obviously we still are very concerned that the activities are safe and done in a cautious manner to make sure that we follow the guidelines ... but we're delighted to see that more people will be able to come out," she said.

Bigelow said she thought the order is a good balance between helping businesses and still keeping enough restrictions in place to emphasize safety and social distancing.

"The mandate is still there for masks and social distancing, but I think it's an optimistic turn that they can have more people in their businesses," Bigelow said.

'Our main priority is safety'

Though the three days since Reeves issued the order haven't been enough time for local businesses to feel the impact of increased foot traffic yet, local business owners and managers said they're hopeful that they'll see more customers in the coming weeks.

"I don't want people all clustered in here and breathing on each other," said Carol Pearson, location manager at Coffee House on 5th in downtown Columbus, "but I'm glad that things are safe enough to start loosening up."

In Starkville, Book Mart and Cafe owner Carolyn Abadie said she hasn't seen an immediate improvement in sales since Monday but that it's been good to see gradual increases in foot traffic and activity downtown. Particularly as school starts back up, her bookstore is starting to see more student customers, whether middle schoolers looking for books or MSU students looking for a quiet place to study.

Both Coffee House on 5th and Book Mart and Cafe have hand sanitizing stations set up for customers at their entrances -- something Bigelow said she'd seen at multiple businesses in Columbus -- and Abadie said she's laid out stickers on the floor of her business reminding customers to keep six feet apart.

Pearson and Abadie said even without the usual number of customers inside, stores and restaurants have become creative with increased curbside business and delivery options, with participation with delivery options like DoorDash.

"The shutdown was horrific for all the businesses," Abadie said. "It was very upsetting because people were losing business left and right and we were seeing stores shut down. As far as loosening the restrictions to 75 percent, I think that'll be OK as long as people follow mask etiquette, placing orders with their mask on and only keep their masks on when they're talking with the waitresses and so forth and take the masks off when they're eating and drinking."

Scrivner agreed with Abadie that loosening of restrictions have to be balanced with safety.

"Yes, we would love to be able to seat at 100 percent capacity," she said, "but our main priority is safety."