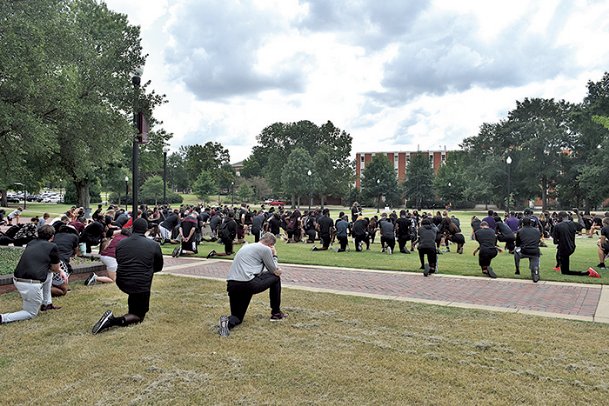 Protesters kneel Thursday at the junction at Mississippi State in remembrance of George Floyd. âThe protesters, made up primarily of MSU student athletes, knelt for eight minutes and 46 seconds.â Photo by: Garrick Hodge/Dispatch Staff

Stepping behind a microphone with nearly 350 masked marchers standing before her at the foot of the south end zone complex at Davis Wade Stadium, Mississippi State junior women's basketball player Sidney Cooks spoke with a deep pain in her voice.

A native of Kenosha, Wisconsin -- a city just miles from the Illinois border with just more than 100,000 residents -- Cooks was flipping through Facebook when the now viral video of Jacob Blake, who is Black, being shot seven times by police officers crossed her feed. Looking on in horror, she recognized the place. It's the same block her aunt and two cousins live on. The same street her best friends from Kenosha called home. The same stretch of pavement where her childhood memories are rooted.

"It really hurt me," Cooks said through an impassioned plea. "And then to see later in the night, how the people in the city reacted -- I just knew they were hurt, too. We wouldn't expect little Kenosha, Wisconsin, to have this much stuff going on."

Leading a pack of student athletes, coaches and employees, Cooks was among the organizers for Thursday's Black Lives Matter march that commenced at the Holliman Athletic Center and culminated at The Junction.

Sprawling nearly 300 yards down the sidewalks, around bends and through the heart of MSU's campus, players from the softball, football, track and field and men's and women's basketball teams strode side-by-side as they clutched homemade signs reading "Let equality bloom," "We are more than just entertainment" and "We all bleed the same color."

"Our mission is to empower our young ladies to be leaders on and off the floor and in the classroom," McCray-Penson told The Dispatch. "But we also have to provide a platform for them to be able to have a voice to express themselves, and that's who we are."

Turning the corner from Humphrey Coliseum, down toward the Joe Frank Sanderson Center and past a construction site on the right, one Black worker perched atop the half-finished structure, stuck his right fist in the air and yelled in support of the marchers as chants of "No justice, no peace" and "I can't breathe" emanated from the crowd.

"Come on y'all, let me hear you!" Cooks yelled encouragingly from the front of the procession.

Senior women's basketball player Andra Espinoza-Hunter rattled off a slew of startling statistics to open the remarks as marchers circled around her. Nine hundred and ninety fatal police shootings occurred in 2018, she said. That number climbed to 1,004 in 2019. As of August 2020, 31 Black Americans per million people were killed at the hands of police officers.

Junior sprinter Shayla Felder offered the group a surreal rendition of Otis Redding's "A Change is Gonna Come." Singing to a crowd holding its collective breath, Felder's tone forcefully climbed up and down the scales as she powerfully bellowed the deep and moving melody.

"It's been a long, a long time coming, but I know that change is gonna come, oh yes it will," she sang.

Following Felder's ballad, those in attendance knelt for eight minutes and 46 seconds, the same amount of time Minneapolis police officer Derek Chauvin, who is white, knelt on George Floyd's neck, ultimately killing him. At each minute interval, a new chant was added. "Black lives matter" and "Say their names" were shouted by the collective contingent.

Senior sprinter Montel Hood led the group in prayer. Sophomore hurdler Cathrina Morris also spoke. Exhaling, collecting and continuing through her sermon, Morris revealed how she'd been pulled over in recent days and immediately tightened up at the thought of an officer approaching her window.

In a summer unlike any in the past century, protests for racial justice and against police violence against African Americans have swept the country, including in the Golden Triangle. Columbus and Starkville each had their own racial justice marches in early June, and the MSU football team boycotted practice to protest at Unity Park two weeks ago.

Thursday, those athletes whose platforms have quickly been thrust into the fight for social justice made their voices loud and clear: This is just the beginning.

"My city is not the only place that has gone through this," Cooks told The Dispatch. "We need to continue to make changes and make our voices heard. We're going to do that."