Mike Leach hired as next football coach at Mississippi State 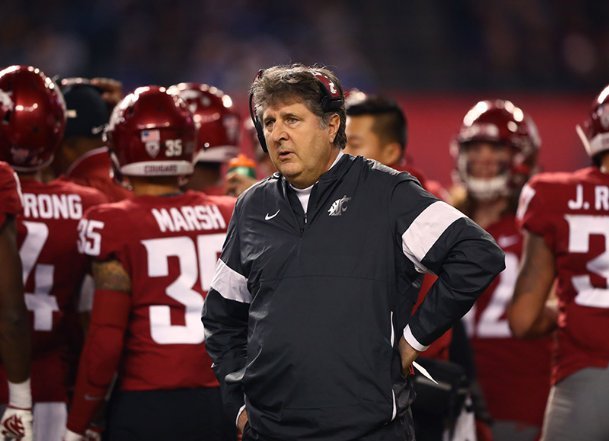 As outspoken as coaches come, Washington State coach Mike Leach has earned a reputation for his brashness -- something that could bode well for a blue-collar program like MSU. Photo by: Mark J. Rebilas/USA TODAY Sports

STARKVILLE -- Mississippi State has its next football coach.

Just six days after Joe Moorhead was fired following a 38-28 loss to Louisville in the Music City Bowl, Washington State head coach Mike Leach is set to become the new head coach in Starkville per a source with immediate knowledge of the situation.

"I can't tell you how excited I am to be the head football coach of the Mississippi State Bulldogs," Leach said in a news release. "I loved Washington State, but I am excited for the next chapter in the SEC. It's a privilege to be a part of the MSU family, and we look forward to getting down to Starkville shortly."

An 18-year head coaching veteran, Leach has compiled a 139-90 record between stops at Washington State and Texas Tech. He has also reached 11 wins twice in his career. Most recently, he guided Washington State to a 6-7 record and an appearance in the Cheez-It Bowl.

The news comes just 24 hours after a source close to the situation told The Dispatch on Wednesday that Leach was "not off the table" after he reportedly met with MSU Athletic Director John Cohen for an interview in Key West, Florida, earlier this week.

A staunchly different offensive mind than Moorhead, Leach will bring his pass-heavy air raid attack and its gaudy passing numbers to Starkville. Over the past two season's Leach's Washington State teams led the nation in passing offense and finished second in 2017. By contrast, MSU finished the 2018 and 2019 seasons ranked No. 109 and 112 in passing offense, respectively.

And though the on-field success has been there, the former Kentucky assistant does come with some baggage. Leach was unceremoniously fired at Texas Tech after he was accused of mistreating a player, though he remains steadfast he's innocent of any wrongdoing.

"Mike Leach is a proven winner who has established a culture of excellence for nearly two decades as a head coach," MSU Athletic Director John Cohen said in a news release. "An offensive genius and two-time national coach of the year, he has a track record of building programs to national prominence with accountability and a blue-collar approach. We are thrilled to welcome him and his family to the Mississippi State family and look forward to watching our football program grow under his leadership."

"I want to commend Athletics Director John Cohen and his staff for conducting a very thorough and true national search," MSU President Mark Keenum added. "In Coach Mike Leach, that search produced a charismatic leader who has proven he can both win football games at a high level and motivate teams to play up to their potential. I'm excited about the future of our football program."

Leach is scheduled to arrive at George M. Bryan Airport with Cohen at 3:15 p.m.