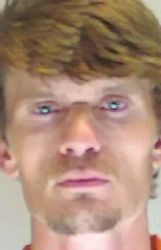 A Columbus man was arrested after he allegedly assaulted a romantic partner.

Deputies received a call on Aug. 21 from a business on Highway 12 where a woman reported Bailey attacked her. She had been in his truck while they were arguing at their home when he dragged her out and threw her on the ground, breaking her finger.

The victim left the area and went to the Highway 12 business to call 911.

Deputies found and arrested Bailey on Sept. 11. He has been released from Lowndes County Adult Detention Center on $5,000 bond.