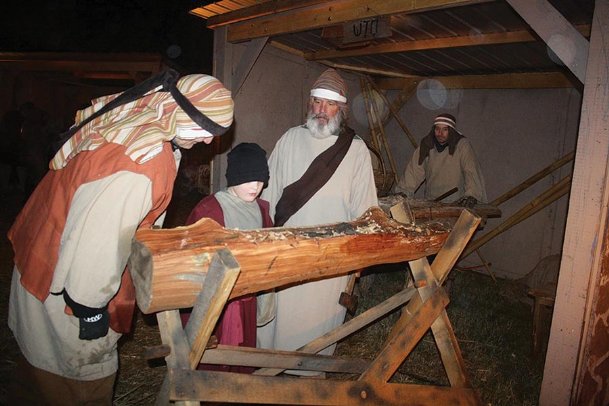 A phenomenon the Golden Triangle has come to eagerly anticipate each December will soon take shape again in a grassy clearing at Brickerton in Columbus. Structures of wood and "stone" will rise near the intersection of Military Road and Bluecutt Road, a recreation of a first-century Bethlehem on the night Jesus was born. First Baptist Church of Columbus presents "First Christmas" Dec. 6-8, from 6-8 p.m. Admission is free, and complimentary cookies and hot chocolate will be offered to all visitors. Musical performances near the village proper will enhance a visit to this seasonal highlight enjoyed by several thousand people each year.

A tradition since 2001, the First Baptist presentation outgrew the boundaries of the church parking lot it was originally staged in on Seventh Street North. It moved to Brickerton in 2012.

Between 80 and 85 costumed actors from the church will portray occupants of Bethlehem during the time of Caesar Augustus' census of Israel, she explained. Venues in the village include a synagogue, a traditional Jewish home, many shops and craftsmen, a working eatery, and, of course, the inn and stable. The eatery will give out samples of an authentic lentil stew believed to be similar to the one the biblical Esau traded his birthright to Jacob for.

Each venue is researched to bring as much authenticity as possible to the village. The live Nativity Scene, with a real baby, is definitely the ultimate destination of visitors, Bullock said. Another venue popular with both the young and young at heart is the live animal paddock.

"The Village has evolved over the last two decades, and this year we are adding dramatic monologues at the well featuring a prophet's observations about the birth of the Messiah," said Bullock. "As visitors exit Bethlehem, they are suddenly transported 33 years into the future and 5 miles away, to the site of the cross and the empty tomb. This provides 'the rest of the story' to the already full First Christmas experience."

First Christmas planners work all year to produce the three-night event. Many supporters work behind the scenes providing all-important support material or working in various logistical roles. Aside from the costumed role-players, volunteers for music, construction, security, parking, hospitality and many more make up the support team, Bullock noted. In total, more than 150 people each day make this their personal Christmas gift to the community. Some volunteers have portrayed the same characters or worked in the same support position for many years. Others will be new to First Christmas or will be moving to a new role this year.

Guests are encouraged to dress warmly and arrive in time to soak in all the sights and sounds. Many guests make the First Christmas experience an annual event and return with their families to share what they first experienced as a child themselves.

2. The art of the blade: Local bladesmith takes forge skills from the back porch to national TV COMMUNITY