The Hunt campus sits empty on 20th Street North, nearly three years after a February 2019 tornado ripped through Northside and badly damaged the facility. A new roof and asbestos removal from the floors is complete, but a federal court dispute between Columbus Municipal School District and its insurance company delayed further repairs. Now the issue is settled, and officials believe construction can begin as early as spring. Zack Plair/Dispatch Staff

Since it was built in the early 1950s, the Hunt school campus on 20th Street North has played considerable parts in Columbus’ social and educational history.

Originally, Hunt was the only Black high school in Lowndes County during “equalization” — the last stand for racial segregation at schools in the South in the waning decades of the so-called “separate but equal” era. It became part of the city’s integration story in 1971, when the campus began educating Black and white students, alike. Through the R.E. Hunt Museum that was housed there beginning in 2011, the campus played a vital role in sharing the school’s, and the community’s, history with anyone willing to learn it.

But for nearly three years, Hunt has sat damaged and empty — becoming what Columbus Municipal School District Superintendent Cherie Labat called, “a part of something that happened in February 2019,” when an EF-3 tornado badly damaged Hunt and devastated homes and businesses in surrounding Northside neighborhoods.

This most destitute chapter of the Hunt story is about to end, Labat said.

CMSD and Wisconsin-based Middlesex Insurance Company have reached a settlement on the amount the insurance company will provide toward repairing Hunt. The Federal Emergency Management and Mississippi Emergency Management agencies are expected to meet with district officials over the next two weeks to determine their respective shares of the work, meaning construction could begin as early as spring.

“We’re ready to move forward and give our community a sense of pride in a facility that’s been part of a lot of people’s lives,” Labat told The Dispatch. “I think it’s going to be vibrant. (Three) years is a long time, but we are also mitigating a pandemic in the middle of this. That slowed down the process along with us trying to get as much as we could for the building (from insurance).”

CMSD had originally pressed Middlesex for $14 million in damages to repair the four buildings that make up the Hunt campus. Middlesex sued the school district in federal court in March 2020, claiming CMSD’s policy only entitled it to $4.8 million and did not include the building that housed the museum.

The insurance company has already covered nearly $3 million in repairs there, which includes post-storm demolition and cleanup, asbestos removal from the floors and new roofs at the facilities.

Labat would not disclose the settlement amount to The Dispatch but said she felt it is “sufficient considering the issues and the policy.” Federal court documents for the case also do not disclose the amount.

Once FEMA and MEMA determine what amount not covered by insurance is eligible for disaster relief reimbursement, CMSD will be responsible for paying 12.5 percent of that portion.

“We still have some things to negotiate with FEMA and MEMA (as far as what qualifies for disaster relief),” said Taylor Guild III with Eley Guild Hardy Architects, which designed the new Hunt campus. “We’re hoping that won’t take long and that we can go to the (school) board next month to report those figures.”

Labat had initially hoped to open the revitalized Hunt campus in August, something she admits is “unlikely.” Guild told The Dispatch if work starts in the spring, it will probably take a year to complete. 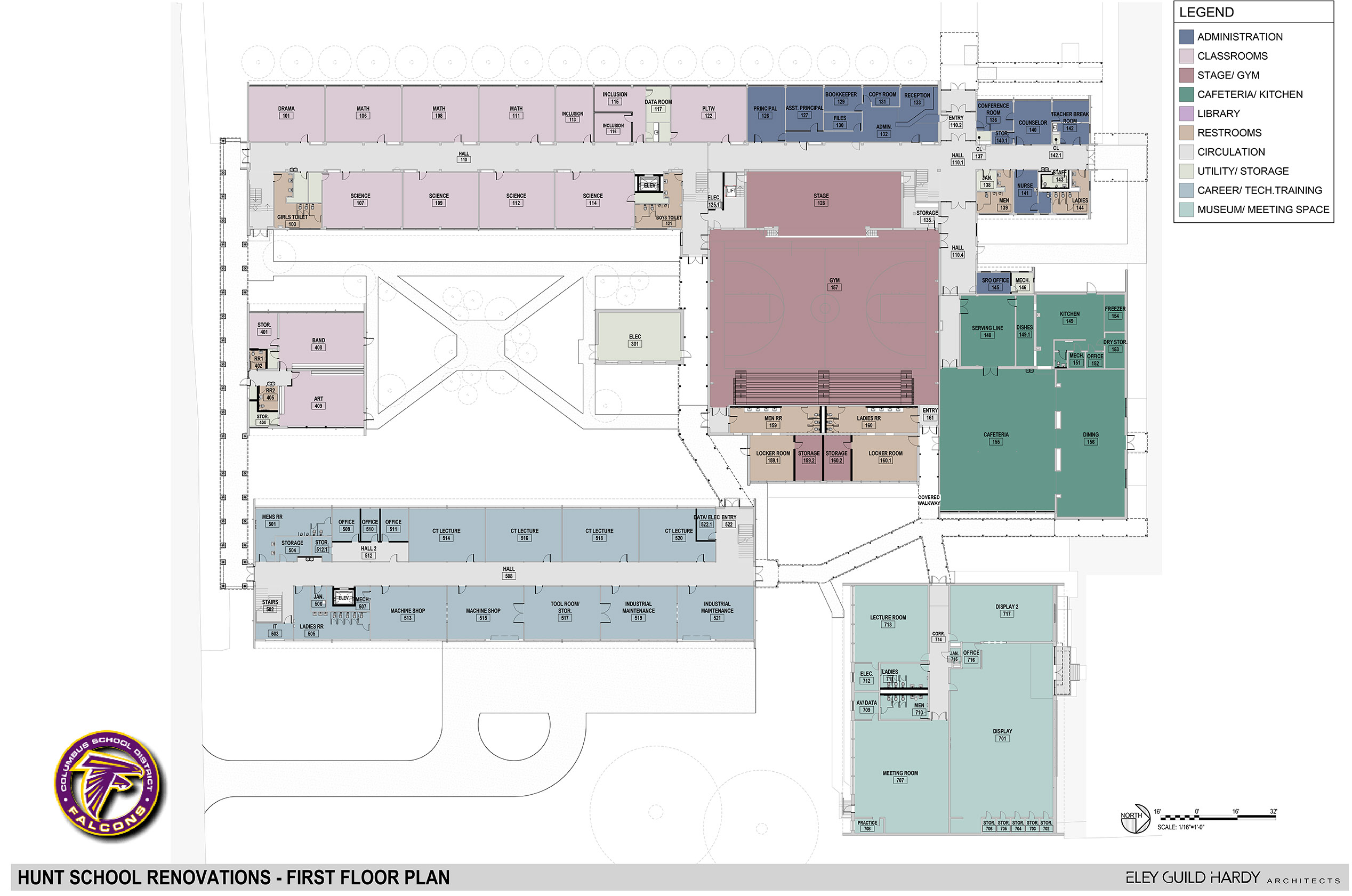 Guild said the design for the projected $16 million Hunt campus will embody all the necessary tenets of a historical restoration — Hunt was declared a state landmark by the Mississippi Department of Archives and History in April 2019, two months after the tornado — while also sporting 21st century upgrades and purpose.

Sixth-grade students now attend the middle school with seventh- and eighth-graders. They make up roughly 225 of the 900 total students at that campus.

“We are reducing the numbers at the middle school, and for that age we want a smooth transition for their social development as students leave elementary school,” Labat said. “We will have programming that will give early exposure to workforce and college pathways, blending learning and a technological focus for students at a pivotal age.”

Other buildings at Hunt will house workforce development space and adult education space, and the R.E. Hunt Museum will return to the same location it occupied before the tornado.

All facilities will have new HVAC, mechanical and electrical systems, Guild said, along with adequate fire protection, new flooring, paint and hardware.

CMSD’s board issued its intent to award the construction contract to Tupelo-based Century Construction and can execute that contract once all the funding questions are finalized, Guild said. Even with material costs skyrocketing nationwide during the pandemic, he said the contractor estimates haven’t changed, which means there should be no need to rebid the project.

“The contractor has been able to hold to his price so far,” Guild said.

Labat said the district has signed memorandums of understanding in-hand from both East Mississippi Community College and the Mississippi University for Women to partner with programming at Hunt once it is complete. She said she will present those MOUs to the school board for approval in February.

MUW will partner with CMSD at Hunt for a dual enrollment program for aspiring educators to create a “student-to-teacher pipeline,” Pollitz said.

Other space will be available to the public to rent for community events.

Labat said she sees the plan to revitalize the Hunt campus as a “community-unifying development.” She also called the project a “moral imperative,” especially considering the community history associated with the campus.

“(Hunt) has a lot of historical factors for everyone in the community — things that are bitter in our past — but it makes a positive future for everyone in (Columbus) to have this resource in a place that will continue to make this a vibrant community.”