Susan Mackay, owner of Party and Paper, stands Monday in what used to be a hotel lobby in the early 1900s. The two buildings on the corner of Fifth Street South and Third Avenue South, which used to be the New Stone Hotel and the Arcade Hotel, have been in Mackay's family since her grandfather bought them in the 1940s. Mackay recently sold the buildings to developers Chris Chain and Tommy Howard who plan to renovate them to their original early twentieth century look. Photo by: Luisa Porter/Dispatch Staff

At the end of the strip of downtown buildings on the west side of the 200 block of Fifth Street South are two buildings more than 100 years old. They’ve been in Susan Price Mackay’s family for 71 years.

On Oct. 28, she and her brother Wayne Price sold them.

Developers Tommy Howard and Chris Chain bought the buildings and plan to restore them to their former glory.

Built in 1905, the buildings have served as hotels, apartments and various retailers throughout the years.

The buildings used to be the New Stone Hotel and the Arcade Hotel in the early 1900s.

Mackay’s grandfather, E.W. Price, rented one of the building’s spaces and opened Price’s Auto Parts in 1936. Sometime in the ’40s, he bought the buildings, Mackay said.

They’ve been in her family ever since. After her grandfather closed his shop, her parents ran a children’s clothing store there in the ’60s. Mackay finally opened Kwik Kopy Printing in 1984, which became Party and Paper in 2009.

Mackay said she and Price sold the buildings because they felt the two developers would restore the buildings to their more original, early twentieth-century look.

“I’m so pleased to have some people that are going to come in that have a beautiful vision to renovate the buildings and just make it a real showplace for Columbus and the state of Mississippi,” she said. “I’m just really excited for all the possibilities.”

The buildings’ history is evident upstairs where preparation for the renovations is already under way.

Most of the rooms have been empty for half a century and are in need of a good cleaning and new wallpaper.

Bathrooms in the buildings that haven’t been used since the ’60s still have claw-foot tubs, and crews found a torn, yellowed Commercial Dispatch newspaper featuring President Harry Truman on the front page in one of the old apartments. An old New Stone Hotel sign was found in the upstairs wall. It now leans against the wall of the old hotel lobby where you can still see railings around where the grand staircase once stood.

The place is a mess, admitted Howard, but it has a lot of potential, and that’s what developers have to be able to see when deciding to undertake a project like this.

“You’ve got to have vision,” Howard said. “If you saw this building, you’d have been like, ‘Really?’ … But you’ve got to see their potential.”

Both Howard and Chain were interested in restoring the buildings and particularly in putting in a boutique hotel where the upstairs apartments were.

They said they don’t know how many rooms the hotel might be, but both think that with downtown events and restaurants, a boutique hotel is exactly what the area needs. They said there would likely be renovated apartments upstairs as well.

Chain said there’s a possibility of a new restaurant, too. He said the restaurant could go in a back room, downstairs, facing the parking lot behind the buildings. If a restaurant doesn’t work out, it could possibly be a space to rent out for events, he said.

Chain also envisions an opening from Fifth Street to the parking lot behind the buildings with retail stores lining both sides. Other Fifth Street-facing fronts could contain offices, he and Howard said.

The renovations will take months — probably a year — Howard and Chain said, and they still don’t have all the details ironed out.

They’re currently working with the City of Columbus to put in 1920s-style light posts outside the building and plan to restore a balcony that once jutted out from one of the hotel’s upper stories.

To let natural light into the space, they’ll repaint the outside and uncover the upstairs windows, which have been painted over during the half century or so that the buildings’ upper floors have been empty.

And all the while, Mackay’s Party and Paper will still be there, though it may move from storefront to storefront in the two buildings as renovations require. Mackay will rent space from the developers to continue operating her store.

“I’m just so thrilled that someone’s got a wonderful vision to renovate them,” she said.

Both Howard and Chain have plenty of experience renovating old buildings around Columbus.

Howard began buying and renovating historical buildings in town as a hobby a few years ago.

His most recent project was just a few doors down from Mackay’s buildings at 208 Fifth St. S., where Robert’s Travel Agency used to be. Howard turned it into a hall where private individuals or corporations can hold events. Renovations took about six months and just finished a couple of weeks ago.

“I love creating things — seeing something, what it is and then what it could be,” he said. “I love downtown here, the history of the old buildings … I’ve always had a passion for it.”

Chain is the owner of Renovations of Mississippi Inc., which he started in 1996. A Columbus native, he said his interest in historical buildings was piqued in the ’70s when he worked as a tour guide in Columbus’s old homes. Now he owns eight downtown buildings in addition to the ones Mackay and Price sold him and has renovated buildings all over the state.

“This is a passion,” he said. “…Rebuilding Mississippi’s heritage.” Developer Chris Chain stands outside an old suite Wednesday in what used to be the New Stone Hotel on Fifth Street South. Chain and Columbus resident Tommy Howard bought it and the neighboring building on the corner of Fifth and Third Avenue South and plan to restore the two buildings to their original turn-of-the-century look and hopefully develop a boutique hotel in the upstairs floors. Photo by: Deanna Robinson/Dispatch Staff Clean-up crews clearing out the two buildings on the corner of Fifth Street South and Third Avenue South discovered an old copy of The Commercial Dispatch in an upstairs suite. The two buildings once housed the New Stone Hotel and Arcade Hotel before World War II and were later home to apartments. Photo by: Luisa Porter/Dispatch Staff 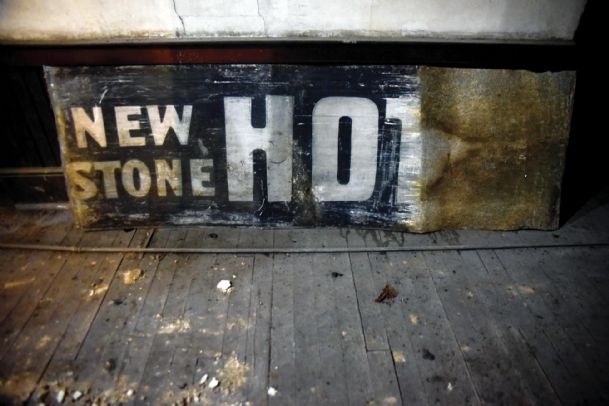 An old sign for the New Stone Hotel, which used to be on the corner of Fifth Street South and Third Avenue South, sits in the building. Photo by: Luisa Porter/Dispatch Staff This old crate would have stored auto parts in the 1930s or 1940s when E.W. Price owned Price's Auto Parts in downtown Columbus. The building was passed down to Price’s son and later granddaughter, Susan Mackay, who runs Party and Paper out of one of the buildings. She recently sold the buildings to developers who plan to restore them to their original early twentieth-century look. Photo by: Luisa Porter/Dispatch Staff