No. 14 Mississippi State blows 12-point first half lead in loss to Alabama

STARKVILLE -- Just three days removed from a snowy sprinkling in Starkville, Mississippi State went ice cold from the field in Thursday's second half as the Bulldogs (8-3, 3-2 SEC) dropped their second game in as many years against Alabama (11-1, 4-1 SEC). 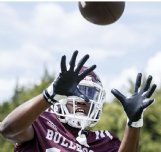 STARKVILLE -- Mississippi State is down another receiver.

The Bulldogs struggled against the Aggies' press defense in what could prove to be a crushing loss down the line.

As the growing pains of a new coaching staff coupled with a young ball club continue to mesh, the Bulldogs' offensive identity is starting to take shape.

STARKVILLE -- Many fans in College Station expected Buzz Williams' Texas A&M Aggies to take a step forward in their coach's second year at the helm. With the only Wendell Mitchell and Josh Nebo departing from last year's roster, steady improvement from a 16-14 overall record seemed feasible.

STARKVILLE -- Two Mississippi State players are potentially on their way out.

EMCC's men's team will play 17 games, and the women's squad will play 14. All contests will be against fellow Mississippi JUCOs.

STARKVILLE -- As Ole Miss guard Donnetta Johnson flung up a last-second attempt in the waning seconds of Mississippi State's 60-56 win over its in-state rival Sunday, those gathered at Humphrey Coliseum held their collective breath.