Stansbury suffers first loss to Ole Miss at The Hump

MSU to scrimmage on first day of practice

Entering the 2008-09 season, the Caledonia High School boys soccer team and first-year coach Morgan Mansfield had to find a way to figure out how to solidify the defense.

Croom returns to the NFL

Johnson hopes to get attention for his driving

Monikers like The Sultan of Swat, The Rocket, and The Human Highlight Film captured the grandiosity and the explosiveness of each of their owners. 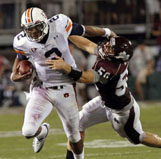 STARKVILLE -- Auburn overcame its own missed chances and a resilient Mississippi State defense to escape Starkville with a 17-14 win Thursday night. The anticipated shootout between two of the league's highlight offenses from Week 1 never materialized, as both offenses were held under 350 yards.