The sophomore broke a scoreless tie with three goals in barely nine minutes to carry the Yellow Jackets to a shutout victory.

The longtime keeper for the Patriots is moving on, but she's not going far.

STARKVILLE -- Another Mississippi State player is reportedly on the move.

Surrounded by family in person and in spirit, Reggie Perry returns to his roots on draft night

Perry was selected by the Los Angeles Clippers with the No. 57 pick in Wednesday's NBA draft and had his rights traded to the Brooklyn Nets, where he'll begin his pro career.

The Tigers' only senior wide receiver, Johnson is a big part of an offense that is "clicking" of late. He's made an impact at cornerback, too.

How West Point football has built a running back dynasty

Year after year, the Green Wave churn out talented rushers. Here's how they do it.

STARKVILLE -- Mississippi State is down another body.

WEST POINT -- Collin Adair tiptoed the right sideline to catch the pass, narrowly managing to avoid stepping out as he brought the basketball safely back into play.

STEENS -- At a softball tournament in eighth grade, CC DeVos tried a new position for the first time. 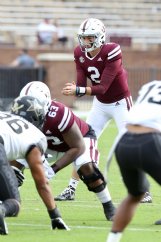 STARKVILLE -- Mississippi State earned a much-needed win against Vanderbilt two weeks ago, before a combination of COVID-19 positive tests, contact tracing and injuries forced the Bulldogs below the Southeastern Conference mandated 53-scholarship player minimum ahead of last week's scheduled game against Auburn.

STARKVILLE -- Mike Leach is planning for a trip to Athens on Saturday.

Two years ago, four-star recruits Reggie Perry and Robert Woodard II were roommates in their freshman season at Mississippi State.

Half an hour before Saturday's Super Late Model feature race at the Magnolia State Cotton Pickin' 100, Chris "Smokey" Madden and Magnolia Motor Speedway's Ben Shelton were joking around in the pit area when Madden made a sudden prediction.

The Panthers entered the fourth quarter trailing just 20-14 against the undefeated Lions, but the home team pulled away.

Mississippi State lost in straight sets to the No. 2 team in the nation on Friday and Saturday.

A two-point conversion in overtime fell short, and so did the Patriots.

Young scored five touchdowns as the Green Wave won its Class 5A first-round playoff game to move one step closer to a fifth straight state championship.