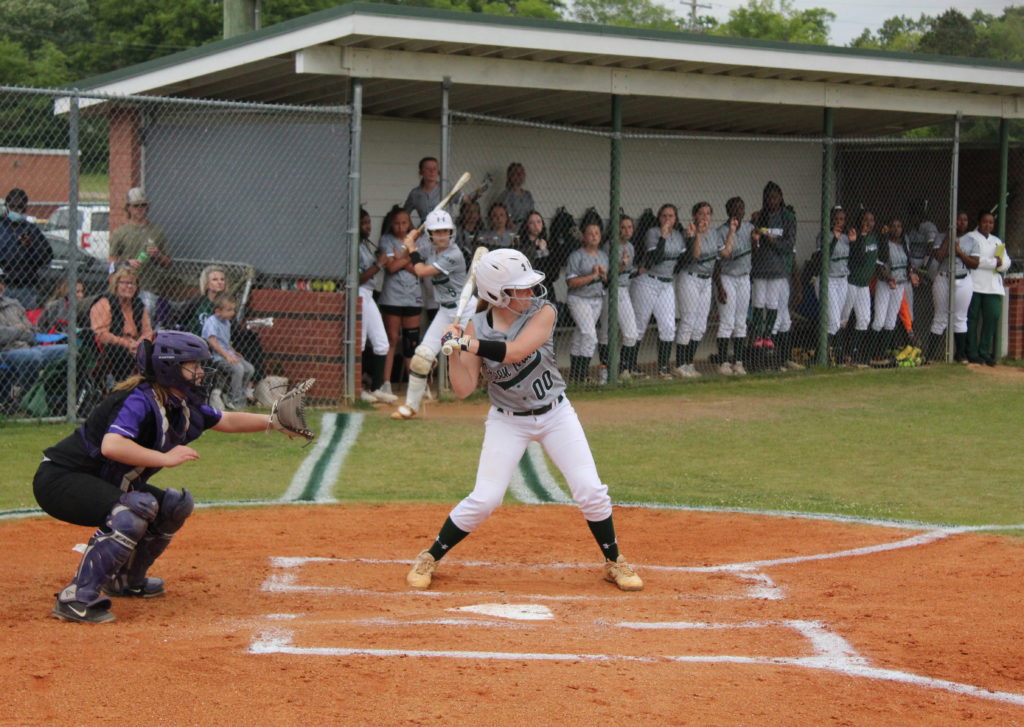 WEST POINT — Rakaiya Williams stared up into the darkening sky.

With little time to spare, the West Point High School left fielder battled the lights as she sought the softball that had just been skied into the air by Cleveland Central’s Kailah Smith with two out in the top of the seventh inning. Williams stumbled a bit on the outfield grass, shielding her eyes with her glove.

Then the ball dropped like a round yellow rock into her mitt.

The Wolves runners on second and third took off, understandably thinking Williams had lost her bead on the high fly. Tameka Davis slid into home plate; Tya Sellers rounded third. But Williams fired the ball back to third, doubling off Davis for the final out of the game.

It was the second key defensive play of the inning as West Point (7-15) held off Cleveland Central (9-14) by a score of 4-2 in the first game of this weekend’s MHSAA Class 5A first-round playoff series.

“We’ve always preached, ‘Whoever’s pitching, you do your thing and we’ll play behind you,’” West Point coach Nathan Ellis said. “That’s exactly what we did tonight.”

Only two batters before Williams instigated the game-ending double play, Green Wave center fielder Marqueshia Starks gunned down Paris Parks at the plate on Davis’ single into center. Parks was called out on a very close play as she slid into home the dish, covering the area with a fine spray of dirt.

The umpire wiped off the plate. A back-and-forth seventh inning continued.

Sellers ripped a single into left and reached second as the ball was bobbled in the outfield, putting Davis on third. Smith’s fly ball off a pitch from Sara Frances Ramsey would easily have tied the game, but Williams came down with it and turned the double play to end it.

“I was very proud of them,” Ramsey said. “We did very good.”

The sophomore was a big part of that herself. She limited the Wolves to only one run through the first five innings before an error plated the second in the sixth, finishing with eight strikeouts in a complete-game performance. She froze Amelia Daniels looking and got Ashanti Williams to swing through a high pitch to escape a jam in the sixth as the Wolves loaded the bases and threatened to take the lead.

Ellis called Friday’s game one of Ramsey’s best performances of the year, and it couldn’t have come at a better time.

“She did a great job,” he said. “She handled their big hitters. She hit her spots and kept them off balance. I couldn’t have asked for a better job.”

Ramsey came up clutch as the Green Wave remained scorching hot after a start that was anything but. West Point lost its first 15 games of the year and has won its last seven.

“We’ve come really far from where we started,” Ramsey said.

After a tough schedule early on, the Green Wave clicked into a gear with a win over J.Z. George, and they haven’t slowed down. They handled Columbus, outslugged Starkville and overwhelmed Aberdeen. A second win over the Falcons clinched West Point’s first playoff appearance in six years and their first under Ellis, who arrived the following season.

Unfortunately for the Green Wave, a pair of losses Saturday handed the Wolves the series.

Cleveland Central roared back from a 8-2 deficit in the first game played on its home field Saturday with four runs in the bottom of the sixth and three more in the seventh for a 9-8 walk-off win.

PONTOTOC — Caledonia clinched a playoff spot out of Region 2-4A with a 14-3 road win in five innings Friday at South Pontotoc.

Gavin Holloman was 4 for 4 for the Cavaliers, who earned the No. 3 seed in the region.

The Cavs will face Yazoo City in the first round of the MHSAA Class 4A playoffs next weekend.

Hayden Dodson pitched a complete game for the Trojans, walking two and striking out four.

Otto Hyche hit a home run to end the game on the run rule for the Yellow Jackets.

Xavier Sherman pitched 3.1 innings for the Jackets. Hyche had two strikeouts on the mound.

Starkville will face Hernando in the first round of the MHSAA Class 6A playoffs next week. Game 1 will be Thursday at Hernando, Game 2 will be Friday in Starkville, and Game 3, if necessary, will be Saturday at Hernando. First pitch for all three contests will be 6 p.m.