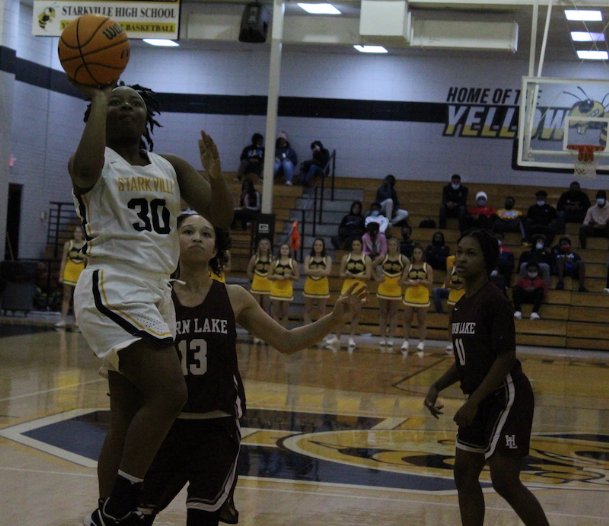 Starkville's Sha'Kerria Tabb (30) goes up for a layup during the third quarter of Monday's MHSAA Class 6A first-round playoff game against Horn Lake. Photo by: Theo DeRosa/Dispatch Staff

STARKVILLE -- Horn Lake junior Tori Johnson held her follow-through for a few extra seconds after her straightaway 3-pointer put the Eagles ahead of Starkville 24-13 early in the second quarter of Monday's MHSAA Class 6A first-round playoff game.

From then on, it was the Yellow Jackets' turn to celebrate.

Starkville began its comeback effort then and there, outscored Horn Lake 44-32 after Johnson made her shot and ultimately held on for a 57-56 win to advance to Wednesday's second-round game at Madison Central.

For the Jackets' five senior starters, Starkville coach Kristie Williams said, living to play another day was all they needed.

"They didn't want this to be their last game," she said.

Forwards Sukkima Suell and Brayland Ferguson were instrumental in making sure it wouldn't be. Suell had a career-high 23 points, and both players were strong on the offensive glass.

"They're beasts on the boards," Williams said. "We've had that all year long, but to see it in tight games like this ... When we need it in crunch time, they'll go get it."

But for all of Starkville's advantages inside, it was the Jackets' defense that made the biggest difference. After falling down 33-23 at halftime following a 3 by Horn Lake's Indiya Bowen, Starkville scored 13 of the next 16 points in the game, keeping the Eagles to just seven points in the third quarter.

"We were able to settle down, and we took it to them defensively," Williams said. "That's what it took. Defense won this game for us tonight."

It helped the Jackets close things out in the final minutes. After Starkville went up by a point, strong defense on the Eagles' ensuing inbounds pass resulted in a five-second call against Horn Lake. The Jackets' Amaya Ford banked in a short jumper with 2:48 to go in the game, and Suell did the same 32 seconds later to give Starkville a six-point lead.

And even when the Jackets went cold from the free-throw line trying to close out the game, their post players saved the day. Suell snagged a Starkville miss in the final minute to deny Horn Lake a chance to tie inside the final minute, and ultimately, the Eagles were fouled down three points with 3.4 seconds to go.

Horn Lake made both free throws, and surprisingly, the Eagles didn't foul Suell when Starkville threw the ball in to her. She dribbled out the final seconds untouched on the wing near her own basket, victory on her mind.

It was an uncertain win after emotions and nerves hurt Starkville early. Ford, a Louisiana-Monroe signee, picked up two uncharacteristic fouls in the first few minutes and sat on the bench for most of the second quarter. She started the third quarter on the court and scored all nine of her points after halftime.

"She was able to regroup, watch the game some and then see, 'OK, now I know what I need to do once the second half comes,'" Williams said.

The Jackets will need to make similar preparations for Wednesday's game at Madison Central, coached by Tameika Brown, a friend of Williams'. The Jackets and Jaguars haven't matched up in a few years, but Williams knows what to expect: a full-court press, a halfcourt trap and "all that you would expect this time of year."

"The team that executes best, handles the ball better, rebounds better will be the one that wins," Williams said.

She and her players expect that to be Starkville. Though Monday's game is likely to be the team's last game on their home floor, if the Jackets keep winning, they could end up right back there in Friday's quarterfinal round.

"If we keep going on, then we can bring it back home," Suell said.

With the fight Suell and Starkville's seniors showed Monday, it's not out of the question.

MACON -- The Noxubee County girls beat Alcorn Central 59-47 to advance to the second round of the Class 3A playoffs.

Jacob Humbers and Loren Cox each went 2 for 2 with two RBIs for the Cavaliers (2-0). Jaden Glasgow had a two-run double.

Josh Pitts pitched three innings for Caledonia, allowing just one hit and no earned runs and striking out eight.

Lowery struck out seven, allowing one hit and two walks. Hayden Dyer walked one and struck out one in a scoreless sixth inning.

At the plate, Cole Gibson went 4 for 4 and drove in two runs. Will Noland was 2 of 3 with two RBIs, and Sawyer Perrigin was 1 of 4 with one RBI.

Aidan Johnson and Clayton Lee each went 2 of 3 and drove in a run, and Dyer was 3 of 4 with an RBI.