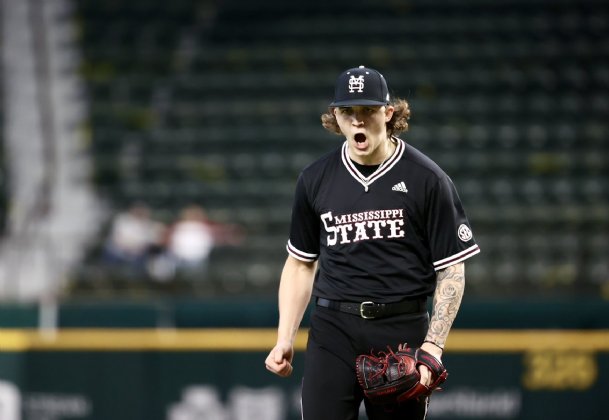 Mississippi State freshman pitcher Jackson Fristoe earned the first start of his career as the Bulldogs had five of their "better arms" missing this weekend, according to head coach Chris Lemonis. Fristoe didn't allow a hit and notched four strikeouts in three innings pitched. Photo by: Mississippi State Athletics

Before a once-in-a-generation global pandemic, before sports were brought to an abrupt halt and before normal life changed as we know it, Mississippi State and Texas Tech met for a two-game set in Biloxi on March 10 and 11. Those days, fans flooded MGM Park under the luminescent glow of the Beau Rivage Resort & Casino on the banks of the Gulf of Mexico to see the Bulldogs sweep the Red Raiders in emphatic fashion.

On March 12, the entire 2020 college baseball season was canceled.

"We really didn't get a chance for the 2020 Bulldogs to have their hugs and say their goodbyes," MSU pitching coach Scott Foxhall told The Dispatch in April. "There's going to be a lot of guys back in our program, but it'll never be the same thing as the 2020 team."

Three hundred and forty-eight days later, No. 7 MSU (2-1) and No. 3 Texas Tech (0-3) met on the final day of competition at the State Farm College Baseball Showdown in Arlington, as the Bulldogs earned their third-straight win over the Red Raiders with an 11-5 victory at Globe Life Field.

With a mix of faces new and old, MSU's win Monday represented its first complete weekend of baseball in almost a year and symbolized a slow-progressing return to normalcy in the sports world.

The Bulldogs were down five of its "better arms" according to head coach Chris Lemonis, including scheduled Monday starter Eric Cerantola. MSU also lost planned Sunday starter Will Bednar to some soreness in his neck. In their places, a fresh-faced Bulldog bullpen guided MSU through its third contest of the weekend.

Electric freshman right-hander Jackson Fristoe received the first start of his career Monday against the Red Raiders. Control issues and a pitch count that climbed to 62 in just three innings of work limited Fristoe's outing, but a rifled fastball that sat in the low-to-mid-90s and a dazzling breaking-ball offered glimpses of the brilliance that had scouts drooling at his potential ahead of last year's MLB draft.

Lefty Cameron Tullar out of Wabash Valley College (Illinois) was MSU's first man out of the pen, though he slogged through a 1.1 inning outing in which he allowed four runs on three hits and walked three.

"It let us learn a little bit more than we would in a normal weekend," Lemonis said of relying on his less proven arms Monday. "Seeing some guys and seeing some guys in some different situations."

For the third time in as many days, fourth-year junior Rowdey Jordan and third-year sophomore Luke Hancock looked the part of dynamic bats at the top and bottom of the Bulldog order. Jordan, who recorded six RBIs on the weekend, smoked a two-run single into right field to give MSU an early 3-1 lead. The Alabama native then recorded his third RBI of the game with a ninth inning triple down the third base line.

After Tullar's debut, Hancock reminded onlookers of the pop he flashed against No. 9 Texas Saturday, sending a first pitch offering from Chase Hampton 15 rows deep into the right field bleachers to put MSU ahead in 5-4 in Monday's see-sawing contest. Hancock then followed Jordan's lead in the ninth inning, recording an RBI single as MSU notched five runs in the final frame.

"I think it just shows we're a bunch of hard-nosed, gritty players who love playing the game each and every day," Hancock said.

For MSU, Saturday marked an afternoon that as recently as four or five days ago felt like it may never come. With winter weather coating the southern United States and that, as of Thursday, had left an estimated 350,000 people in the Dallas-Fort Worth area without power, Lemonis endured nearly 100 phone calls over the past week to sort out the dizzying logistics of getting his squad to the Lone Star State.

With commercial flights stalled out of Memphis and Jackson to varying degrees, MSU had to get creative. The Bulldogs, instead, boarded a chartered flight from Birmingham in conjunction with in-state rival and fellow College Baseball Showdown participant Ole Miss, and arrived in Texas on Friday.

Lemonis said he didn't get a final go-ahead on the trip until late Thursday night.

"It was fine," he quipped of flying with the Rebels. "We walked in. They walked in. The only bad part is we have to wait for their game to be over, but it's a lot better knowing that we won."

As the mid-afternoon sunlight creeped through the towering windows well over the left-field wall at Globe Life Park, MSU celebrated its third win over Texas Tech in as many tries.

The last time these teams parted ways, the Bulldogs and Red Raiders headed off for their respective homes stung by the end of a season that never was. One year later, MSU leaves Arlington having rather emphatically announced that the Bulldogs look every bit the part of a national title contender preseason prognosticators pegged them as.