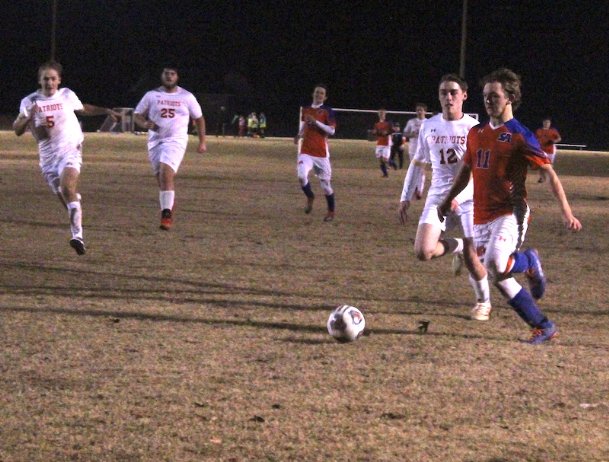 Starkville Academy senior Brody Pierce makes a run on goal during the second half of a Jan. 4 match against Heritage Academy at the Starkville Sportsplex. Pierce's shot was saved, but he scored not long afterward in the Vols' 3-0 win. Photo by: Theo DeRosa/Dispatch file photo

With a 3-1 loss to Lamar School on Feb. 11, the Starkville Academy boys soccer team missed out on a chance to win the MAIS Class 4A, Division II East title.

But that hasn't stopped the Volunteers from setting their sights high as they head into the postseason.

"The district championship may not have been in the cards for us, but I think (the) state championship's still there for us," Starkville Academy coach John Morgan said.

As the No. 2 seed in their division, the Vols earned a road date with Division II West top seed Pillow Academy in their first-round playoff match. The contest is finally set to be played at 5 p.m. Monday in Greenwood after multiple delays because of inclement weather.

The Vols did not practice this week with school closed thanks to the snow, ice and below-freezing temperatures that suddenly descended on the Golden Triangle. Morgan said the team might have to come out cold and play the Mustangs on Monday for their first action in several days.

"We haven't really had a chance to do much of anything, but I don't think anybody else is really getting that opportunity, either," Morgan said. "Anytime you break your routine, it's always tough to make sure you get the boys back and get their minds right."

The layoff did give a couple key Starkville Academy players a chance to recuperate, though. Seventh-grader Nathan Miller is still recovering from a cleats-up foul earlier in the season, and Morgan said Miller should get his stitches out prior to Monday's match.

Senior Brody Pierce will have a chance to rest his sore hamstring, too. Pierce had one of the three Volunteers goals in a shutout win for Starkville Academy against Pillow on Dec. 14 at Chazzy Moor Field in Greenwood. In that match, the Mustangs only had one or two scoring chances against the Vols' stout defense.

Morgan said Pillow's "bread and butter" is its 4-3-3 formation, which is typically strongest in the midfield. He said the Mustangs have a pattern for what they do on the attack.

"They'll usually funnel the ball out wide and then look to cross it in and hope somebody's doing their job up top," Morgan said.

He noted that Pillow made some changes over the course of the season to improve its scoring odds. The Mustangs often pull an extremely fast defender with little ball skill up to the top of their formation, hoping to connect on a long pass. That strategy, Morgan said, may not work against the Vols.

"(T)he problem is you've got to be careful because you move him up, well, now your defensive line is exposed to our speed," Morgan said.

He expressed concern over the field conditions for Monday's match, pointing out that a portion of the pitch during the teams' December match was so wet after recent rain that passes died instantly in the soggy grass. After the snow, sleet and ice of the past week, things could be the same.

"I'm hoping that the field's not saturated," Morgan said.

Although victory over the Mustangs isn't assured, Starkville Academy is feeling good about a possible second-round rematch with Lamar should the Vols win and the Raiders beat Washington School. Morgan said his team possessed the ball 72 percent of the time in the two matches between the two, including a Starkville Academy win on penalty kicks on Feb. 5 in Meridian.

"We controlled the game; they play a long ball game and just want to boot it, and we were on the wrong end of some bad touches, and they took advantage of it," Morgan said. "If we make it through and we have Lamar, I feel confident that we're going to have the right game plan to make their life hectic."

Before that, though, the Vols must take down Pillow on Monday. According to Morgan, they're ready.

"I think our guys are very confident in what we're able to do," Morgan said. "The first thing now is, 'Let's just get past the first one, and then we can worry about the next one.'"