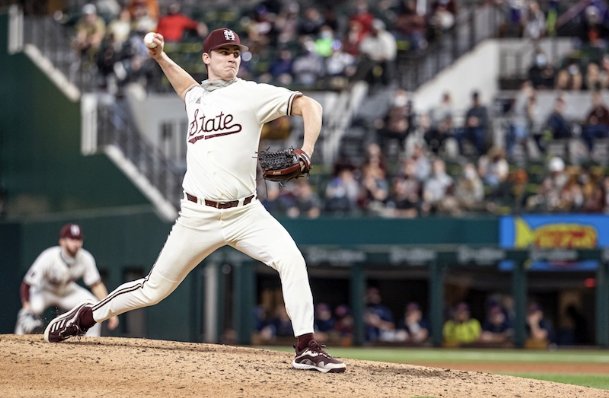 Brandon Smith made his first appearance since 2019 after Tommy John surgery. He got out of a big spot in the fourth inning and finished with one hit and one run on his line in 2.1 innings. Photo by: Mississippi State Athletics

Scotty Dubrule dropped the bat and jogged to first base.

When the Mississippi State freshman second baseman walked on four pitches to load the bases with one out against No. 10 TCU (1-1) in the bottom of the ninth Sunday afternoon, the maroon-and-white faithful at Globe Life Field in Arlington, Texas, reached a fever pitch.

MSU had cut a 3-1 lead in half on a Josh Hatcher single and was suddenly poised to tie the game if not win outright. What momentum the Horned Frogs had held a few minutes earlier, the seventh-ranked Bulldogs had seized.

But a few pitches later, it was gone. Drew McGowan hit into a game-ending double play, and the Bulldogs' frantic comeback effort came up just short in a 3-2 loss Sunday in the State Farm College Baseball Showdown.

"Our guys fought to the end," Mississippi State coach Chris Lemonis said. "We had some really good at-bats there in the ninth."

The Bulldogs (1-1) brought home their first run of the inning after Logan Tanner hit a one-out double and Hatcher poked the ball up the middle to score him. Hatcher went first to third on a Luke Hancock base hit, and Dubrule took a free pass from Garrett Wright.

But McGowan's hard ground ball to second on a 1-1 count found the glove of TCU second baseman Gray Rodgers, who flipped to shortstop Tommy Sacco. Sacco threw on to first to complete a critical 4-6-3 double play that promptly erased Mississippi State's comeback chances.

"It had to be hard hit, and it had to be right there," Lemonis said of McGowan's grounder, noting the freshman's 4.1-second time to first base. "It was a really good swing off a really good arm."

The Bulldogs managed seven hits against TCU lefty starter Russell Smith and three relievers, struggling to bring runners home when they had the chance.

"Smith was phenomenal," Lemonis said of the 6-foot-9 southpaw, who presented tough angles for MSU hitters in his 5.1 innings on the mound. "We were having a hard time with it. I really tip my hat to him more than get on my guys."

Marcelo Perez allowed three hits in three innings in relief of Smith, being pulled for Augie Mihlbauer after Tanner's double. Mihlbauer was lifted for Wright after giving up a single to Hancock, and Wright closed out the game.

The Bulldogs scored their first run in the sixth on a solo home run by Rowdey Jordan, his second homer of the season in as many games.

"I think I'm seeing it pretty well," Jordan said. "You know, I'd like another hit or two, but I'm seeing it alright, putting the ball in play. That's the biggest thing."

Jordan's swat answered Austin Henry's RBI groundout for TCU in the top of the sixth, but the Horned Frogs stretched their lead again in the seventh when Sacco brought home Luke Bowers on a sacrifice fly.

Mississippi State showcased six pitchers Sunday, starting with left-hander Houston Harding. Scheduled starter Will Bednar woke up with a knot in his neck, prompting Lemonis to go with the Walls product who had just warmed up in the ninth inning of Saturday's win over No. 9 Texas.

"Really tough kid, and to go out there in that environment and compete without much preparation, I'm really proud of him," Lemonis said.

Harding departed with two men in scoring position and one out in the fourth inning, giving way to Brandon Smith, who made his return from Tommy John surgery in a tight spot. Smith got Zach Humphreys to pop up foul near first base and induced a groundout to third from Conner Shepherd. He allowed just one hit and one run over 2.2 innings, striking out two.

"I think what you're going to see with Brandon and these guys coming off Tommy John is every time they pitch, they're a little bit better," Lemonis said. "Their stuff grows. He's still in that process right now to where he's going to be a really big piece of our bullpen to help us extend the games."

Jaxen Forrester allowed a run in the seventh for the Bulldogs. Kole Alford and Chase Patrick combined to pitch the eighth, and Xavier Lovett handled the ninth.

Lemonis said the team would reassess Bednar's status Saturday night to determine if he will be ready to start Monday's 11 a.m. series finale against No. 3 Texas Tech. If not, expect another bullpen game for the Bulldogs, Lemonis said.

"We just have to see who is available for tomorrow and how they match up," he said.