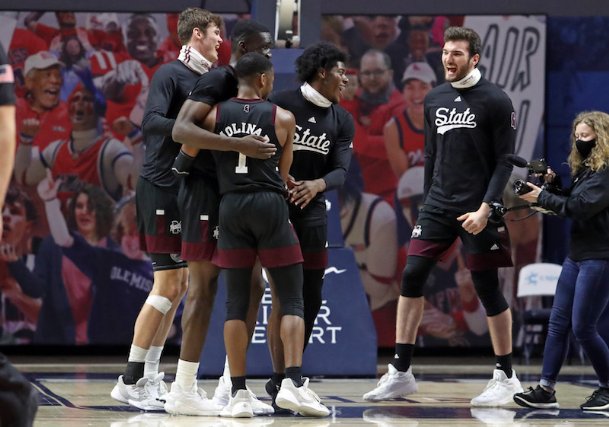 OXFORD -- At this point in the season, it's probably too late for Mississippi State to do anything worthy of earning an at-large bid to the NCAA tournament.

That didn't stop the Bulldogs from trying to make darn sure their rival doesn't get there either, though.

MSU avenged an embarrassing 18-point loss to the Rebels on Jan. 19 in Starkville, taking it to Ole Miss on its own home court Saturday by winning 66-56 to salvage a season split. The Bulldogs (12-11, 6-8 SEC) were also in desperate need of a win after dropping six of their last seven Southeastern Conference games.

"They whipped us on our home floor (before), and we really took that to heart," MSU coach Ben Howland said. "We had been a bad slide as we all know. We really needed this game so we can get some momentum going in our last four games."

Entering the contest, the Rebels were among ESPN bracketologist Joe Lunardi's "First Four Out" in his most updated bracket. Ole Miss (12-9, 7-7) had won four contests in a row before losing to MSU but now will likely need a strong finish to the season along with a successful SEC tournament run to qualify for the Big Dance.

But MSU senior center Abdul Ado isn't going to make any apologies for making the Rebels' road to the tournament harder. Ever since he stepped foot on Starkville's campus, Ado said he's taken losing to Ole Miss "personally." The 6-foot-11 center let his teammates know about his disgust for losing to their rival throughout the week in practice. He didn't care about the team's recent poor play. Ado wanted to make sure his team was on the same page about representing their school in what he calls the biggest game of the year. Whatever Ado said must have worked, because the Bulldogs were a different team than the one that was embarrassed by SEC bottom-feeder Vanderbilt seven days ago.

"We want to leave our stamp that we're the best team in the state," Ado said, who finished with nine points and seven rebounds. "This was personal."

MSU can largely thank the defensive efforts of D.J. Stewart for the victory. Stewart, with an assist from his help side defense filling in the gaps, suffocated Devontae Shuler. Shuler was Ole Miss' leading scorer entering play at 16 points per game on average and previously torched the Bulldogs with 22 points in the Rebels' win in Starkville. The sophomore guard left Shuler no breathing room to spare, holding him to 4 points on a putrid 1-of-15 shooting effort on Saturday.

"We set the tone defensively early," Howland said. "... D.J. deserves a lot of credit for that, but his teammates that were helping do too."

Stewart scoring 16 points didn't hurt either, which included making a key floater with just more than a minute remaining with his team up six to seal the victory.

Iverson Molinar had a game-high 17 points and drew a smile from Howland postgame considering one of his six baskets came on a bank shot with the shot clock expiring to halt an Ole Miss run.

"Oh, he called bank on that," Howland joked. "After he shot it, he just yelled BANK."

Howland also credited the mental fortitude of Molinar, who had a tailbone injury earlier in the week after taking a hard fall at practice.

"There's no bigger game to do it," Howland said of Iverson's big night.

Tolu Smith was the only other Bulldog in double figures with 12 points, while KJ Buffen led Ole Miss with 13.

At halftime, MSU saw a once 13-point lead dwindle to 31-25 entering the break but never gave up the lead in the second half. Meanwhile, both teams were careless with the ball, committing 14 turnovers apiece.

MSU is back in action against South Carolina at 6 p.m. Wednesday at Humphrey Coliseum.