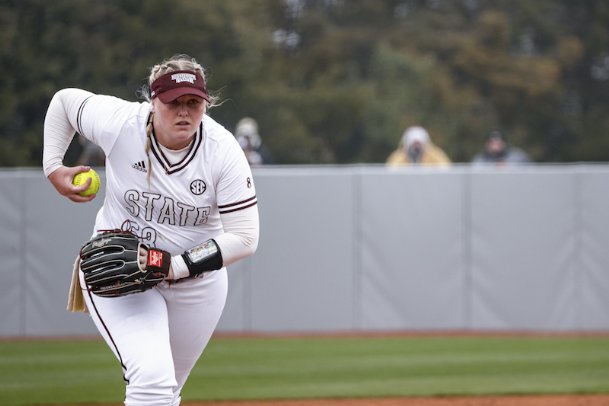 Mississippi State senior Emily Williams throws a pitch during the first game of a Feb. 13 doubleheader against Miami (Ohio) in Starkville. Williams and fellow Bulldogs ace Annie Willis were shaky in cold temperatures against the RedHawks and will have to improve to avoid another scare this weekend. Photo by: Austin Perryman/MSU Athletics

The Mississippi State softball team needed a late comeback to earn a sweep of Saturday's season-opening doubleheader against Miami (Ohio).

Now, after a weeklong layoff, the Bulldogs (2-0) will get back on the field hoping to build on that success.

Here's a look at the four opponents Mississippi State will be facing and what the Bulldogs can expect from each.

Stephen F. Austin didn't face a single Power Five opponent last season, but that didn't stop them from posting a 19-4 record before the season was shut down because of the COVID-19 pandemic.

SFA boasted a win over Memphis and had just begun Southland Conference play with a sweep of Lamar University when play was halted.

The Ladyjacks could pose the strongest test of the weekend for a Bulldogs team that will not have played in eight days.

SFA received one vote in the final NFCA/USA TODAY poll of the 2020 season. The Ladyjacks have yet to play in 2021 after a tournament at Texas A&M and a home game against Texas Southern were both canceled.

Southern Illinois won its last nine games in 2020 to post a 15-6 record prior to the suspension and eventual cancellation of the season.

The Salukis did it against a tough schedule, losing to South Carolina, Purdue and Ohio State and beating Michigan State and Creighton. But SIU never got a chance to start its Mid-American Conference schedule.

Monday afternoon won't be the first time the Bears and Bulldogs have matched up in February.

Last year, Mississippi State opened its season against its fellow "MSU" in the NFCA Leadoff Classic in Clearwater, Florida. The Bulldogs notched a 5-0 shutout victory keyed by a Fa Leilua two-run double.

The Bears had their opening four games -- against No. 23 Baylor and No. 9 Louisiana in a tournament in Lafayette, Louisiana -- canceled and come to Starkville looking to begin their season Sunday.

The Bulldogs close out the tournament by facing Mississippi Valley State, which struggled to a 5-16 record in the abridged season.

Notably, MSU's two games against the Devilettes last year in the Bulldog Slamboree tournament went fairly well, and that might be an understatement.

In the first, Annie Willis struck out 19 batters in a dominant no-hitter. In the second, Mississippi State scored 20 runs in just four innings in a 20-3 mercy-rule victory.

It's fair to expect more of the same when the Bulldogs face their overmatched in-state foes, who have yet to play in 2021, for the first time Monday.

Mississippi State will see Valley again at 4 p.m. Wednesday in a one-off nonconference game in Starkville.