Luke Hancock, bottom of Bulldogs order deliver in No. 7 Mississippi State's season-opening win over No. 9 Texas 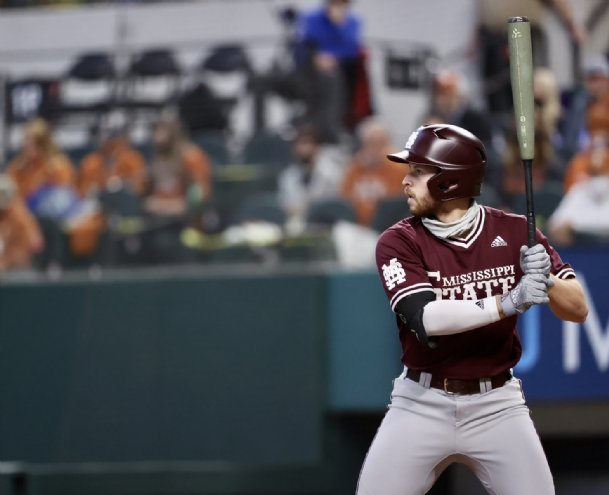 For 346 days, Mississippi State waited for afternoons like Saturday. Through a promising start to a season that came to an abrupt halt, a global pandemic and a once-in-a-century winter storm that threatened to cancel the Bulldogs' season opener entirely, the ghosts of months past have held steady since last spring's two-game sweep of No. 4 Texas Tech in Biloxi.

Finally, after months of anticipation, MSU (1-0) took the diamond once more, handling No. 9 Texas (0-1) 8-3 in the first game of the State Farm College Baseball Showdown Saturday in Arlington, Texas.

"Oh, it was a blessing," Bulldogs head coach Chris Lemonis said. "It has been a long year and an even longer week with all the stuff that we've had to go through."

In a year in which offense was a legitimate question mark heading into 2021, MSU, at least for now, answered offseason prognosticators' doubts decisively in its first victory of the year. With Jordan Westburg and Justin Foscue off to the professional ranks, the Bulldogs have noticeable holes in the middle of their lineup.

But on an afternoon in which MSU's star-studded junior trio of Rowdey Jordan, Josh Hatcher and Tanner Allen recorded just one hit in their first 13 at-bats, catcher Luke Hancock anchored a prolific day from MSU's bottom of the order quartet. Together, Hancock, Scotty Dubrule, Drew McGowan and Landon Jordan combined for seven of the Bulldogs' 12 hits and four of their seven RBIs.

Relegated to designated hitter duties Saturday as Logan Tanner caught starter Christian MacLeod, Hancock delivered as loud an offensive display as he's found in his limited college career. Finishing the afternoon 3 for 4 with two RBIs and a walk, Hancock opened the scoring when he raced home on a single through shortstop from Landon Jordan.

Two innings later, Hancock sat back on a grooved fastball from Texas starter Ty Madden -- the No. 10 eligible player in next year's draft according to MLB.com -- and roped the pitch over the right field wall for a solo homer and MSU's first long ball of the young season. Hancock then earned his second RBI of the day with a smoked single through the middle of the infield to put MSU ahead 5-0 in the top of the fifth inning.

"I don't care if I'm catching, DHing," he said through his thick drawl. "I just want to be out there and help the team win any way I can."

One of a slew of third-year sophomores back in the mix for the Bulldogs, Hancock has bided his time in Starkville. A five-time letterman and three-time team MVP at Houston High School, he's spent the bulk of his MSU career in varying roles, splitting catching responsibilities, first, with Dustin Skelton and now Tanner. But entering his third year with the program, there's expectations in what Hancock can bring to this Bulldog lineup.

"I feel like he's an everyday guy right now," Lemonis elaborated. "I feel like every day we go out there he's got a chance to be in the lineup."

Granted there were other moments of brilliance in Saturday's victory. Second-year freshman Landon Sims was virtually unhittable in his four innings of relief. Stepping into a bases loaded jam he inherited from MacLeod -- who totaled seven strikeouts in four innings of work before being pulled in the fifth -- Sims blew away three straight Texas batters with a fastball that sat in the mid-90s for the bulk of his outing.

Notching the final strikeout of the frame, he let out an exuberant, "Let's go!" as he swaggily stepped off the bump.

"Those are the situations you come to Mississippi State for," Sims said postgame. "Those big-time situations, in front of all of our fans that traveled all the way out here."

Positives aside, the 2021 season is almost assured to be rocky given the ongoing COVID-19 pandemic. College football and basketball have given ample evidence of such.

And while uncertainty remains and the grill smoke and rocking Left Field Lounge were replaced with a limited capacity at Globe Life Field, Saturday afternoon in east Texas offered a humbling return to normalcy in a season sure to be littered with the abnormal.

"A lot was taken away, obviously, through the last year for everybody," Lemonis said. "But man, when we finally got inside the ballpark and we could play baseball, it put a smile on your face."