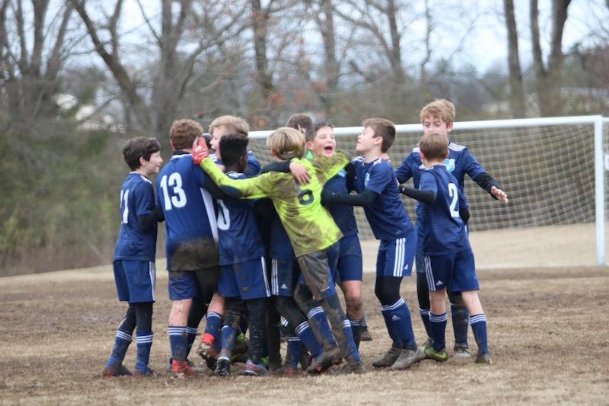 The Columbus United U12 boys team celebrates its championship victory over Tupelo Futbol Club-Amory during the Frostbite Tournament from Feb. 6-7 in Starkville. Photo by: Courtesy of Tom Velek

The Columbus United U12 boys team poses with the championship poster after its win at the Frostbite Tournament from Feb. 6-7 in Starkville.
Photo by: Courtesy of Tom Velek

The Columbus United U11 boys team poses with the championship poster after its win at the Frostbite Tournament from Feb. 6-7 in Starkville.
Photo by: Courtesy of Tom Velek 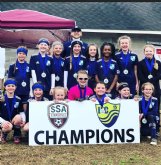 The Columbus United U11 girls team poses with the championship banner after its win over the United U12 girls team at the Frostbite Tournament from Feb. 6-7 in Starkville.
Photo by: Courtesy of Tom Velek

Three Columbus United Soccer Club teams won their divisions at the Frostbite Tournament on Feb. 6-7 at the Starkville Sportsplex.

The U11 boys, coached by Jim Hicks and Jamie Baucom, beat Saltillo FC on penalty kicks after the score was tied through two overtime periods. The team will next play at the Tupelo Spring Classic on Feb. 27-28.

The U12 boys, coached by Dave Albertson and Will Starks, beat Tupelo Futbol Club-Amory 4-1 in their championship match.

The U10 girls, coached by Allie McCulley, finished as tournament finalists. They lost to the Meridian Alliance but defeated Saltillo FC, Starkville Soccer Association White and SSA Maroon. The team will play at the BFC Spring Kickoff from Friday-Sunday in Brandon.

The boys U10 team also competed in Starkville. Chris Mackey and Curt Rogers coach the team.

Three United U8 Development Program teams also competed at the tournament. The two boys teams are coached by John Tuggle and Jason Spears, and the girls team is coached by Layla Wilson.

Columbus Soccer Organization has announced the inaugural CSO Collegiate Scholarship. The scholarship will be awarded to students beginning college in the fall of 2021.

The scholarship fund was established by generous donations in honor of Marolyn Albertson, the grandmother of Columbus United coach Dave Albertson. It recognized her life and the important contributions that the Albertson family has made to soccer in the area. To be eligible, an individual must have played soccer with CSO at U15 and above. Preference will be given to players who are playing soccer in college, though all applications are welcomed and encouraged. Included are four-year institutions, community colleges, and workforce training programs. Individuals must show institutional need. The award can be renewed for an additional three years after the initial award. Being a player with CSO means more than putting on your cleats for a team. It means having the support of an organization behind you -- both as a player and as a student.

More information and an application can be found at columbusmssoccer.org.