Previewing the first round of MHSAA basketball playoffs for area teams 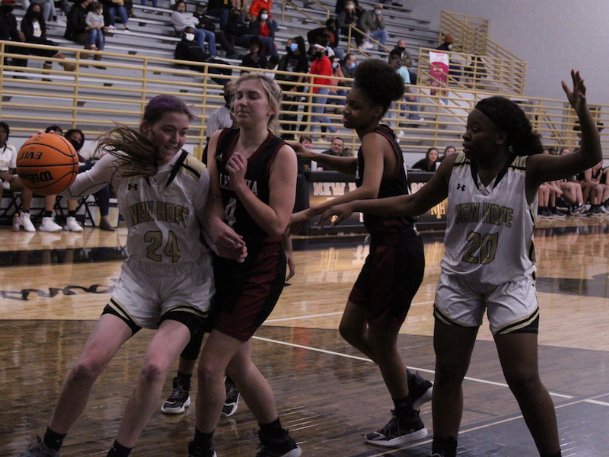 New Hope senior Anna Prince (24) prepares to pass the ball during the third quarter of a Feb. 2 home game against Caledonia. The Trojans will face Cleveland Central in their first-round matchup. Photo by: Theo DeRosa/Dispatch Staff

Snow, ice and below-freezing temperatures wreaked havoc on the first-round schedule for the MHSAA basketball playoffs.

Girls games were originally delayed from Monday to Thursday, and boys games were pushed from Tuesday to Friday.

But several schools chose to play their first-round contests Saturday, the final day to play the games, leading to a haphazard weekend schedule.

On Wednesday, the MHSAA announced teams could play first-round girls games Monday and boys games Tuesday. Schools that could still play Friday and Saturday will be allowed to keep their matchups if desired.

The Dispatch broke down each area first-round matchup. Times will be listed for games that have been rescheduled to Monday and Tuesday, with other game times remaining in flux.

The Trojans earned the second seed in Region 2-5A after a loss to Columbus in the district championship game.

They earned a home game against Region 3-5A No. 3 seed Cleveland Central on Thursday night.

The Wolves went 3-3 in region play, splitting with Neshoba Central, sweeping Canton and getting swept by Holmes County Central.

Cleveland Central opened its season with a 63-30 win over Grenada, which split with New Hope in two regular-season matchups.

New Hope won four of its final six regular-season games, beat the Chargers in the district semifinals and lost to the Falcons in the title game. The Trojans finished 3-3 in district play.

After a 58-46 loss to host and top seed Germantown in Friday's Region 3-6A championship game, the Starkville High School girls return home to host Horn Lake on Monday.

The Eagles are the No. 3 seed in Region 2-6A. They split with Oxford, swept Southaven and were swept by Hernando.

Starkville went 2-2 in district play, beating South Panola twice but losing to Germantown twice during the regular season. The other team in the district, Greenville, opted out of the season.

Class 3A: No. 4 Alcorn Central at No. 1 Noxubee County

The Tigers beat second-seeded Houston for the Region 4-3A championship on Friday at Hatley High School.

That earned Noxubee County the No. 1 seed and a home date with Alcorn Central of Region 1-3A on Saturday.

The Bears finished 1-5 in district play, splitting with Booneville but getting swept by Amory and Belmont.

The Columbus High School boys finished second behind New Hope in Region 2-5A.

The Tigers' district slate included a win over Neshoba Central but two losses each to Holmes County Central and Cleveland Central.

Both teams played Louisville this season, with the Falcons beating the Wildcats 68-43 and the Tigers winning 63-46.

The Caledonia boys beat South Pontotoc in last Wednesday's Region 2-4A quarterfinal to make the top four and thus secure a playoff spot.

And the Cavaliers have a road date at Yazoo City on Tuesday for their troubles.

With just one loss, West Lowndes entered the Region 5-1A tournament last week as the district's No. 1 seed.

But the Panthers missed out on a chance to host its first-round game after a one-point upset loss to Nanih Waiya in last week's district semifinals.

Instead, West Lowndes will make a long trip to Tylertown to take on Region 8-1A No. 2 seed Salem on the road Tuesday.

The Wildcats won six straight games before losing to Lumberton for the third time this season in the district final. Salem swept Richton and Sacred Heart but split with Resurrection Catholic.

By virtue of losing Friday's district championship to Houston, Noxubee County earned the second seed in Region 4-3A.

That gives the Tigers a home game Saturday against Amory, the No. 3 seed in Region 1-3A. The Panthers lost to Nettleton in the semifinals of their district tournament before beating Belmont in the consolation game.