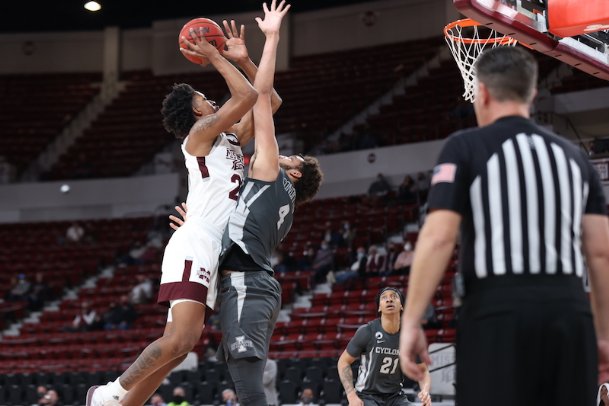 After sitting on the bench the majority of his freshman year, Mississippi State's Derek Fountain has cracked the Bulldogs' rotation. He had a career-high 20 points on Feb. 10 against LSU. Photo by: Mississippi State athletics

Front and center are two of his former pupils: Kendrick Fountain and his little brother, Derek. Kendrick is in the midst of signing his National Letter of Intent to play at Itawamba Community College, while the 6-foot, eighth-grade version of Derek is shown alongside his sibling in support.

Those were the days Derek was called "little D." He was primarily a point guard and had been all his life.

Then he became, well, not so little. By the time he was a junior, Fountain had sprouted nine inches. Maybe it was a miracle growth spurt, but Kilgore could've seen it coming a mile away.

"Most of the time if he's not on the court, he's unconscious," said Kilgore, who now coaches basketball at South Panola. "He does a lot of sleeping. That's why he grew so much. We would go on recruiting trips or go on away games, man, that guy would be sleeping before we got out of the dadgum parking lot. I'm not exaggerating."

Fountain's change in stature had a few Division I schools foaming at the mouth. He stayed at the point as an upperclassman, but it was obvious to anyone Derek would be a power forward or small forward at the next level. Mississippi State's Ben Howland started expressing interest in Fountain his junior year, initially drawn to a skill package embodied by a player of that size.

Deciding to stay close to home, he signed with the Bulldogs in June 2020.

Adjusting to the next level

Anyone who knows Fountain usually describes him using the adjective "competitor."

"Derek is relentless," said Kenzaki Jones, who coached Fountain his final year at Holly Springs. "We had a couple graduates come back to Holly Springs to shoot around, and Derek took all of them on and had a little talking back and forth between all of them. He'd always make some big plays and show them he's not backing down from any challenge. He's got some grit in him."

Just from taking recruiting visits, Fountain knew he'd have to live in the weight room once he got to college after seeing how his potential future teammates were built.

Since entering the program this summer, Fountain has put on about 18 pounds of muscle.

When the Bulldogs started practice in November, Fountain wasn't even one of their best 10 players on the floor. Both of his high school coaches thought he'd need an entire year of seasoning before he was ready for any major college action.

Fountain was an afterthought the first half of the season, spending his game days on a stool spaced out 6 feet apart from other players because of COVID-19 protocols.

He wasn't used to being the low man on the totem pole. Understandably let down being relegated to the bench, Fountain said his role took some getting used to.

"I realized it was really on me," Fountain said. "If I wanted playing time, I had to work more, had to improve more."

But, he embraced it. His frustration over limited playing time never carried over into any team activity. Howland said he was always engaged in every practice, regardless whether it was running scout team or individual drills. Those closest to him were also paying attention.

"As his former coach, it was obvious he wasn't playing a lot but we stayed in constant communication," Kilgore said. "I would tell him he has positive body language and was very engaged in the games. It's not like he knew the camera was on him. That's just a kid that wants to get better."

Although he had played in three games prior, Fountain first raised eyebrows in a game during garbage time in a 39-point win against Iowa State on Jan. 30. The Holly Springs native only played five minutes but converted all three of his shots and scored seven points.

At the time, Howland's Bulldogs had been careless taking care of the ball, so the coach hinted Fountain could crack the team's nine-man rotation because his previous experience at guard could assist in helping against traps and opposing presses. Fountain's first meaningful action came three days later against Arkansas, where he scored seven points in a loss to the Razorbacks. Howland didn't sense any nerves from the freshman, but Fountain admitted there were a few. The queasy feeling slowly disappeared after seeing his first basket go through the net, though.

One game later, he played 29 minutes, more than any he'd logged in any of his previous five games combined, en route to scoring nine points and making three of four shots in a victory against South Carolina.

"It was all about pulling the trigger. I should have pulled the trigger (and played him) probably three weeks or a month ago," Howland said after MSU's win against the Gamecocks.

His breakout game came at Humphrey Coliseum on Feb. 10 against LSU. Fountain scored a career-high 20 points and grabbed seven rebounds, albeit in a losing effort.

The momentum faded slightly after Fountain regressed in his first career start against Vanderbilt, only scoring two points and struggling against the Commodores' double-team in a 21-point loss.

But if his limited sample size is any indication, Fountain figures to be a key factor in MSU's program going forward.

"He's played a lot of minutes for us lately. Look for that to continue," Howland said.