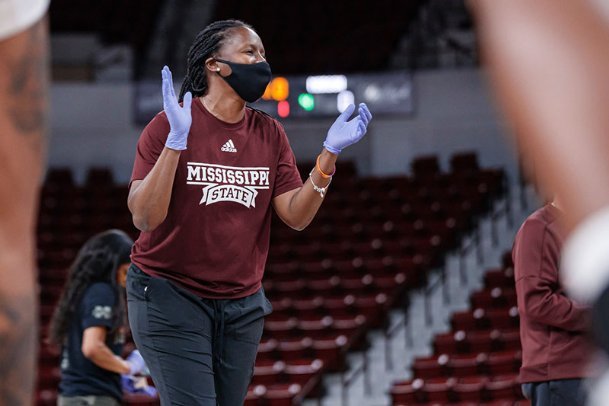 From the time she arrived at Mississippi State in April, McCray-Penson has attacked expectations but offered a refreshingly transparent glimpse into the daily battles of building a program into her own mold. From maintaining a roster that seemed on the verge of mass exodus to reeling in five-star pledge Madison Hayes, the former Old Dominion head coach masterfully navigated the treacherous waters in the days following Vic Schaefer's departure.

Now 10 games into the season, though, speed bumps have arisen. Overtime losses to No. 16 South Florida and No. 12 Kentucky brought out the worst in fans, calling McCray-Penson unfit for the job or worse. But as the growing pains of a new coaching staff coupled with a still incredibly young ball club continue to mesh, the Bulldogs' offensive identity is starting to take shape.

"I think it's an offense where anybody can score," McCray-Penson explained of her system Wednesday. "The ball finds who should score. When we're getting to the third and fourth side, I mean, that's where we should be able to punish people and we should be in position."

While McCray-Penson's free-flowing, positionless scheme is not completely in opposition to Schaefer's patented dribble-drive attack, there are differences. In short, the Bulldogs are pushing pace, hunting transition buckets in a way they didn't a year ago.

Take MSU's 3-point shooting marks, for example. In Schaefer's final year in Starkville, the Bulldogs concluded the season 130 of 405 from behind the arc, or 32.1 percent. In McCray-Penson's offense, players are finding more space while being encouraged to shoot from distance with more consistency. Heading into Thursday's meeting with Alabama, MSU has already converted 68 of 185 3-point attempts, good for a 36.8 percent clip. Should that trend persist over the final two-thirds of the season, the Bulldogs would be on pace to hit 204 shots from distance on 555 attempts -- 150 more tries than a year ago.

"I want our kids to be ready to score this ball from the outside," McCray-Penson explained of how she sees MSU taking advantage of the 3-point line. "When you've got someone like Jessika Carter down low that's playing well, she's going to clean up for you, as long as we understand when that shot is coming and it's an expected shot."

While 3-point shooting is the starkest contrast from last year to this season, there are other offensive improvements that have followed. For much of her regular season tenure, McCray-Penson has harped on her team for its rebounding and the effort needed to dominate the glass. Sound familiar? Sure, the tone echoes plenty of Schaefer-led sermons in years past, but McCray-Penson's words seem to be manifesting in 2020-21.

As of Wednesday, the Bulldogs are averaging 41.9 rebounds per game compared to last season's 38. MSU has also seen its rebounding margin over opponents rise from three a season ago to 4.6 this winter.

The noticeable improvements in rebounding and most of the stats to this point are of course bolstered by MSU having played only four Southeastern Conference games to date, but they still bear merit. Having lost forward Chloe Bibby to transfer and guard Jordan Danberry to graduation, the Bulldogs were forced to replace at least 8.9 rebounds per night this year. Through 10 games, MSU has done just that, but recent outputs as SEC play does offer some pause.

Carter has seen her rebounding numbers jump from 8.7 per game last year to 9.3 this year as she continues progressing toward an all-American level. Hayes and sophomore JaMya Mingo-Young, too, have bolstered MSU's rebounding numbers as they've combined to average 10 boards per game, while junior forward/center Sidney Cooks has added another four rebounds per game to the ledger.

In all, the Bulldogs currently boast six players averaging at least 3.1 rebounds or better.

"With our players in (JaMya) and Madison, they're high-motor kids," McCray-Penson said. "You expect them to get in there and rebound, and we expect that from them, and they do that pretty consistently."

This isn't to say 2020-21 is off to a rip-roaring start. While MSU is averaging nearly four rebounds better than last year's squad, the Bulldogs have corralled an average of just 34 boards in their four conference games -- one rebound shy of their average during SEC play last year. The team field goal percentage has also dipped from 47.5 percent to 46.9 percent, albeit in part to an increase in 3-point field goal attempts.

At 8-2, 3-1 in conference play and ranked No. 14 in the latest Associated Press Top 25 poll, some fans are ready to jump off the McCray-Penson bandwagon altogether. But as the numbers show, incremental improvements are being made. And though the Bulldogs had their chances in both their losses this season, the early year lumps feel more reminiscent of growing pains of a new staff rather than an indictment of a failed experiment.

"I think you're going to see us playing our best basketball in February," McCray-Penson posited. "We'll have more games underneath our belt; we'll have more practices and things like that."