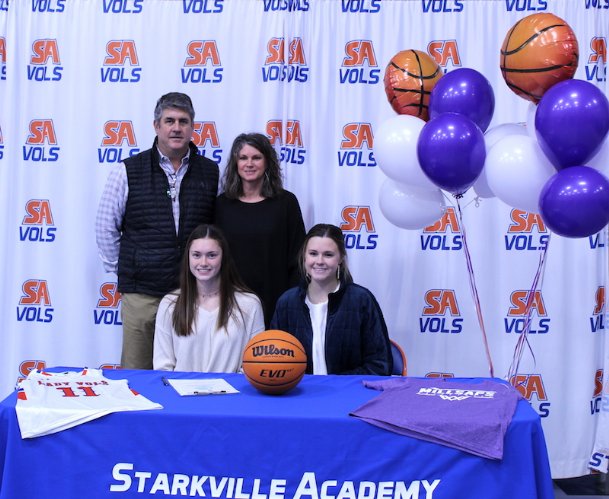 Starkville Academy senior Lillee Alpe crossed the 1,000-point scoring threshold over a year ago and has only continued to produce for the Volunteers. Alpe (front left) signed to Millsaps College in Jackson on Wednesday. Photo by: Theo DeRosa/Dispatch Staff

STARKVILLE -- Those who braved the cold to reach the Starkville Academy gym Wednesday morning saw the trappings of a celebration.

Lillee Alpe's family, friends, coaches and classmates observed the themed decor: Balloons, including two orange ones made to look like basketballs; expertly decorated cookies and cupcakes in pastel colors; a white No. 11 jersey and a purple T-shirt at opposite ends of a table draped in a blue cloth.

But there was one thing only a few of them ever saw: the work Alpe put in to get to that point.

The Starkville Academy senior signed her letter of intent to play basketball for NCAA Division III Millsaps College on Wednesday, the culmination of a process that began long before that chilly morning.

"Lillee has worked her tail off," Starkville Academy girls basketball coach Marianne Ward said. "She's spent countless hours. She knows what it takes to go out there and play. She's everything that these young girls look up to, and I'm excited to see what the future holds for her."

Indeed, Alpe put in the work to grow her game since starting her varsity career as an eighth grader. And lately, she's only stepped it up, making visits to the gym on weekend afternoons and at 6 a.m. twice a week -- a practice spurred by a competitive family atmosphere.

"(They) always taught me hard work will get you places, and basketball has just always been my passion," Alpe said.

In those early mornings and lonely afternoons -- coming into the gym without Ward or anyone else ever having to ask -- she puts her focus on the fundamentals she needs to improve.

"She's working on the things that she knows that she needs to work on to become that player," Ward said.

Alpe has certainly become "that player" for the Volunteers, helping lead the way in scoring last season and taking on an even bigger load as one of two seniors this year. Just over a year ago, she hit the 1,000-point milestone against Heritage Academy in Columbus, and she's only moved up the list since.

"She'll leave as one of the all-time great scorers here at our school," said Starkville Academy boys coach Bill Ball, who coached Alpe and the girls team last season.

Ball also credited the commitment shown by Alpe, who plays travel basketball for the Alabama Southern Starz in addition to her Starkville Academy career.

"That shows the commitment right there to go and play and practice nearly every weekend in the spring and summer," Ball said.

For Ward, who took over the program from Ball at the end of last season, Alpe's improvement and her work ethic have led to more than just the development of a star player. The Vols coach said she can simply point Starkville's younger players in Alpe's direction.

"This is what it takes to get what you want," Ward has told her team. "This is where we're trying to go with this program."

Wednesday showed what the reward can be for a player who makes it through as Alpe has done. Dozens of classmates, family members and coaches looked on as Alpe signed the paper representing what's to come.

"This is really an opportunity to recognize that and honor her ... " Ball said. "We can't wait to watch her and follow her career in college. Congratulations, Lillee. I know how hard you work and the example you've been."

Alpe said she chose Millsaps because the Majors' coaches made her feel like home and because of the academic instruction she will receive in Jackson.

"Millsaps is a very high academic school, so I felt like I was going to get the sport I loved along with a good education," Alpe said.

She became the first player to sign to play in college under Ward, but the coach said there's no mistake: Wednesday, and what it represented, belongs to Alpe.

"It means the world, but today's her day, and I'm so happy for her to go out and live that dream," Ward said.