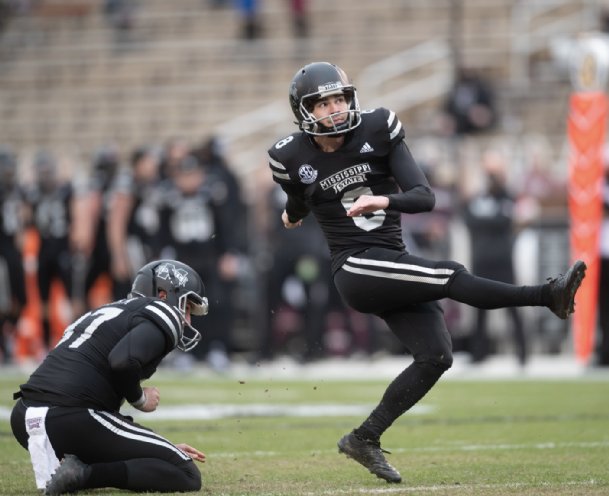 Brandon Ruiz hit 10 of his 13 field goal attempts in 2020, his first season at Mississippi State after graduate transferring from Arizona State. Photo by: SEC Media Portal

Redshirt junior kicker Brandon Ruiz announced via Twitter that he would be returning to MSU for his senior season. A former Arizona State graduate transfer, Ruiz started 10 games at placekicker last season.

"After considering all my options I have decided to return for my senior year at Mississippi State," he wrote. "And I am excited to hear the cowbells at Davis Wade Stadium with full capacity!"

With program kicking points leader Jace Christmann -- whom Ruiz beat out for the starting job in fall camp -- announcing his intention to transfer from MSU on Tuesday, Ruiz's return gives the Bulldogs another valuable offensive weapon and less uncertainty at the position.

MSU concluded its 2020 campaign at 4-7 with a win over No. 24 Tulsa in the Armed Forces Bowl. Ruiz did not appear in the bowl game.