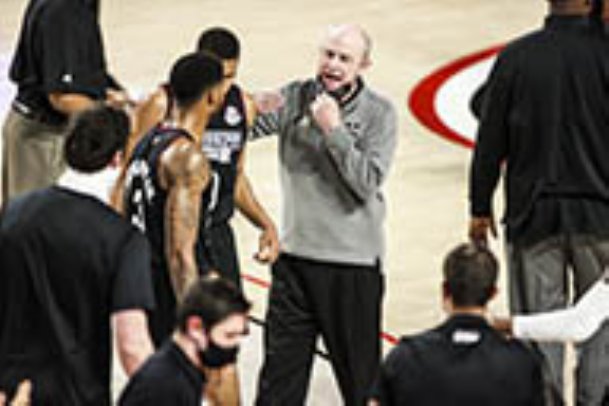 Mississippi State will kick off a three-game homestand when it faces Texas A&M at 8 p.m. Wednesday at Humphrey Coliseum. Photo by: SEC Portal Photo

STARKVILLE -- Many fans in College Station expected Buzz Williams' Texas A&M Aggies to take a step forward in their coach's second year at the helm. With only Wendell Mitchell and Josh Nebo departing from last year's roster, steady improvement from a 16-14 overall record seemed feasible.

Four games into Southeastern Conference play, things haven't gone as planned for the Aggies. Texas A&M has stumbled to a 1-3 start in league play, with all three losses coming by double digits. Meanwhile, Mississippi State enters Wednesday's matchup at Humphrey Coliseum with A&M red hot, winning eight of its last 10 games and getting off to its best start in SEC play since the 2016-2017 season (3-1).

Of course, MSU coach Ben Howland isn't taking the slumping Aggies lightly. To be fair, it would be out of character for the sixth-year head coach to make any kind of slight toward an opponent, regardless of record.

"I think they have very good talent," Howland said. "They've got good pieces, and they are a hard team to score against in that they are so help conscious. They are very much in the gaps. When you drive the basketball, you are going to have three guys on you. So you're going to have to have good spacing and get the ball moving to be able penetrate and create help and give it up. They are trying to be more aggressive with their press to create steals and create offense out of some of their defense."

Texas A&M has a daunting post presence in sophomore Emmanuel Miller, who leads the team in points (17.3) and rebounds (7.8) per game. According to KenPom.com, the Aggies are a walking turnover machine on both ends of the floor. Whether it be from the press or the Aggies collapsing forwards in the paint, around 25 percent of A&M's defensive possessions end in a forced turnover, the 14th best mark out of 357 Division I teams. On the flip side, it gives away the ball on 25.1 percent of its possessions, which is one of the worst percentages nationally (334th).

MSU will be without the services of Alabama transfer Javian Davis, who will miss his third straight game for undisclosed reasons that aren't academic or disciplinary related. It's possible Davis could return for the Bulldogs against Florida on Saturday. Wednesday's 8 p.m. tipoff will be the first of three straight home matchups for the Bulldogs.

By now, nobody is surprised any time Abdul Ado shines on the defensive end of the floor. The senior center has endeared himself to fans by climbing up the ranks in MSU career blocked shots, sitting third all time in program history with 203 blocks.

Nevertheless, seeing him shut down a 4-on-1 breakaway by his lonesome in Saturday's win over Vanderbilt was a sight to behold.

"He's so good defensively for us and he's such a huge factor," Howland said. "I thought late in the game he had a block that went against him and we were upset about it because it was pretty clean if you go back and watch the video on it. But he handled it well, and there's going to be calls that go against him. It's just how it is for both teams, and you have to deal with it.

"He does so many things that don't show up on the stat sheet ... I think he is the best player in the conference in defending ball-screen actions and picking up guards coming at him. He is so athletic and big and strong.

Despite a big win over No. 13 Missouri a week ago and a fast start to league play, MSU isn't cracking anyone's bracketology projections. At least, not yet.

But playing with a chip on their shoulder isn't anything new to Bulldog players.

Ado, one of the Bulldogs' leaders, has said earlier this season the team feeds off their resentment from being picked to finish 12th in the SEC preseason poll. It would truly be a dream season to make the program's second NCAA tournament appearance in 12th years and the second in the last three years (with the obvious stipulation that there was no postseason in 2020).

Despite the motivation, March is still a long way from making its way to the Bulldogs' radar, though.

"I think we are playing well. Whether or not we get into the tournament will be determined by the success we have," Howland said. "So I'm not even thinking about that and just thinking about one game at a time. Our league is very tough, very good. Every game is a dogfight, literally, and is so hard.

"This game (against A&M) is going to be incredibly difficult. They play very hard and they are very athletic. They play small ball, which they've been doing here the last few games more and more, which makes it a difficult matchup for us in terms of defense. We just have to continue to be who we are and keep grinding away."