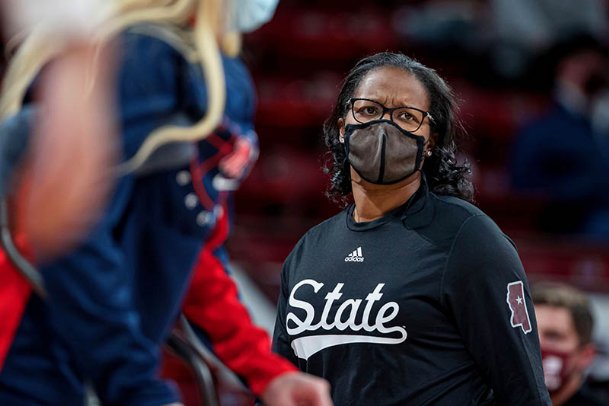 STARKVILLE -- As Ole Miss guard Donnetta Johnson flung up a last-second attempt in the waning seconds of Mississippi State's 60-56 win over its in-state rival Sunday, those gathered at Humphrey Coliseum held their collective breath.

For a brief moment, it appeared the Rebels had the tying bucket they needed as Johnson's heave tickled the net. Inches short, the shot missed entirely and MSU escaped with its 14th straight win over Ole Miss in a rivalry that's been anything but anxiety ridden.

Thanks in large part to former head coach Vic Schaefer and the Bulldogs' rise to national prominence, the past decade-plus worth of in-state battles have followed a dominant trend in the series' history. After the Rebels took 50 of the first 51 meetings in the annual series, the Bulldogs have won 19 of the past 21 meetings, while Ole Miss hasn't beaten MSU in Starkville since 2007.

But Sunday's contest offered a renewed look at the ever-developing rivalry and the immense gap between the two programs that continues to close.

"We came up in here, and for two years we've been getting our asses kicked," Ole Miss coach Yolette McPhee-McCuin said postgame. "We came in here, and we didn't have one of our major big three, and we fought.

Whether Sunday's contest falls on an improved Ole Miss squad or a down MSU team is complex. Really, it's some of both.

The Bulldogs headed into the 2020-21 campaign with expectations of an Elite Eight or beyond. Freshman sensation Rickea Jackson, the nation's No. 5 recruit in the class of 2019 according to ESPN, would be a sophomore. Sophomore forward Jessika Carter, too, would take a step toward her limitless ceiling after evolving into an all-SEC caliber player a year ago. Other young pieces like freshmen Aliyah Matharu and JaMya Mingo-Young were slated to come into their own.

Then it all came crashing down.

On April 5, a picture surfaced of Schaefer and his family with Texas Athletic Director Chris Del Conte. The architect of MSU's decade of dominance was suddenly en route to Austin.

Questions swirled as to who would replace him. Schaefer lieutenant Johnnie Harris was in the running. So too was Louisville head coach Jeff Walz. Ultimately, administrators settled on Old Dominion's Nikki McCray-Penson, a former Southeastern Conference Player of the Year at Tennessee and a Dawn Staley disciple.

In her earliest days on the job, McCray-Penson fought to keep the roster as constructed. Rumblings sputtered whether Jackson might leave. Would others follow Schaefer to Texas? In all, McCray-Penson mostly pieced her squad back together aside from the transfers of Chloe Bibby and Andra Espinoza-Hunter. She also held onto five-star signee Madison Hayes, whose commitment came under scrutiny in the days after Schaefer's departure.

"For me, it's really about listening to them right now and just getting a feel for them and letting them get a feel for me," McCray-Penson said at her introductory press conference on April 14. "I've been asking them what things I need to do to help speed this up. Just really learning their personalities and really asking them what they need. That's really important. When you step into something like this, you want to make them feel a part of something, and that's what I'm doing right now. It's been great. They are tremendous players and awesome people."

Through 10 games this winter, MSU sits at 8-2 with losses to No. 16 South Florida and No. 12 Kentucky on its ledger. Whether it be coaching or the growing pains of a new system, McCray-Penson has come under harsh scrutiny from the fan base given the Bulldogs' early lumps and seemingly friendly approach to coaching her squad. So much so, Jackson came to her aid in the hours after the Kentucky loss.

"Y'all are on the outside looking in," she wrote. "Just because y'all see videos of us smiling together doesn't mean she's 'friends' with us! y'all don't even see the half of how hard she coaches us. She's an AMAZING and TOUGH coach. Stop assuming."

Opposite McCray-Penson, McPhee-McCuin has soldiered through a two-year spell as a conference doormat. Taking over a program whose best year under previous coach Matt Insell was a third-round WNIT appearance, McPhee-McCuin took to changing the culture in Oxford, though a combined 16-45 record over her first two seasons made her seat perhaps a touch warmer than was merited heading into this season.

With slews of transfers like Maryland import Shakira Austin and Johnson, a one-time Georgia transplant, and the addition of five-star freshman Madison Scott, who didn't play Sunday due to undisclosed reasons, the Rebels' third-year head coach has quietly built Ole Miss into, at the least, a team that can compete night in and night out in a conference that boasted six teams in the latest Associated Press Top 25 poll.

"What you're seeing is a maturation process right in front of your eyes," McPhee-McCuin said Sunday. "Mississippi State won't be the only ranked team that we play. We'll play other ranked teams ... So the vibe, they're heartbroken. They're in there crying. They're in there sad because they wanted to win. We fell short. Now when adversity hits we have to grow from it. And we will. I'm confident."

Following Sunday's bout, the Rebels sit at 7-2 and 1-2 in conference play, compared to MSU's 3-1 mark in the SEC. But for a series in which the Rebels were run off the court for much of the past decade -- including last season's Bulldog victories by an average of 33 points -- and with MSU rebuilding, to a degree, under a new coaching staff, the most recent rivalry meeting offered a look at a series that is increasing in competitiveness. Whether that remains the case when the Rebels and Bulldogs meet again in Oxford on Feb. 14 remains to be seen.

"Make no mistake, their program is better in all facets and that's a contribution to (McPhee-McCuin) and her staff and the work ethic they've done with recruiting and they're only going to continue to get better, as we are as well," McCray-Penson said Sunday. "But this will always be a rivalry, and at the end of the day we'll always support each other until we play each other, just like any competitor."