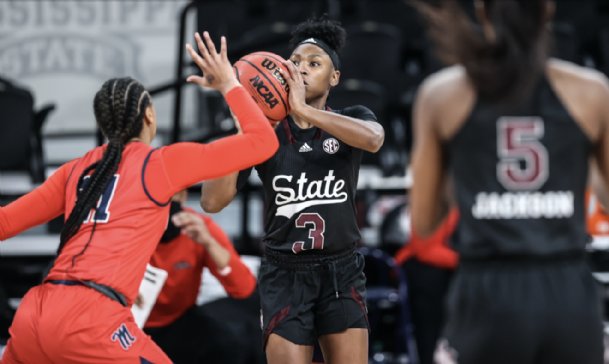 STARKVILLE -- The woman in black stepped to the top right corner of the 3-point arc at Humphrey Coliseum and banged home a 21-foot jumper as the shot clock buzzer echoed throughout the empty arena.

Just a stone's throw down Highway 12 from where Johnny Cash was held in the Starkville City Jail following a performance at Mississippi State 56 years ago, it was sophomore guard Aliyah Matharu, donning MSU's annual all-black, Cash-esque uniform, that cut down an inspired effort from in-state rival Ole Miss in Sunday's 60-56 Bulldog victory.

Pacing an MSU offense that looked out of tune as it mustered a meager 25 percent shooting effort in the first quarter, Matharu was decisive, definite and dominant in the Bulldogs' 14th-straight win over a Rebels team that hasn't bested its neighbors to the South since 2014.

"Coach (Nikki McCray-Penson) always says 'Start off with an easy shot, get your feel,'" she explained. "I came in and got fouled, got an easy and-1, and then from there I just found rhythm, found my feel."

After torching Ole Miss for a career-high 24 points a year ago in Oxford, Matharu finished Sunday's rumble with 16 points on 5 of 8 shooting -- good for her fifth double-digit scoring output of the season -- and was the lone Bulldog scorer with more than two first half field goals.

Coming out of the halftime break, it was Matharu's 3-pointer from the top right corner of the arc that splashed home and began a furious Bulldog run. With the Ole Miss defense shadingtoward Matharu around the 3-point line with a furious mix of zone and half-court traps, junior forward Jessika Carter found a groove reminiscent of her 25-point, 15-rebound performance at Florida Thursday. Finding easy looks as she forced herself deeper and deeper into the post, Carter notched 11 of her 19 points over the game's final 20 minutes.

And though Carter outperformed Matharu on the scorer's sheet, Sunday was the latest look at what MSU's bouncy 5-foot-7 guard can give the Bulldogs on a night in which sophomore sensation Rickea Jackson managed just nine points on 3 of 9 shooting.

Denigrated for her defense during much of last season by then-head coach Vic Schaefer, she's taken to new head coach Nikki McCray-Penson's way of working with eagerness. Sunday she kept a suddenly competent Rebels backcourt in front of her, generally avoiding the defensive breakdowns that landed her on the bench alongside Schaefer a season ago.

"I've challenged her to be a defensive stopper for us, because she's one of the fastest players in this league," McCray-Penson said postgame. "And when she sets her mind to guarding the ball and being disciplined on the ball, I think she can keep anybody in front of her."

Yet for the growing improvements Matharu continues to press toward, it's her dynamic offensive arsenal and lethal 3-point shooting ability -- 42.4 percent, to be exact -- that's seen her game evolve into a nightly nightmare for opposing defenses.

Over MSU's final five games a season ago, she averaged 15.4 points per game, including 15- and 17-point outbursts against Kentucky and South Carolina in the Southeastern Conference Tournament semifinals and finals, respectively. Sunday marked the fourth time this year she's eclipsed the 15-point mark, while she's shot 40 percent or better from the floor in seven of 10 games this winter as her minutes have increased from 9.9 a season ago to over 20.

"It's definitely taken me to another level," Matharu said of being a more regular piece of the 2020-21 rotation. "I've been working on the little things -- still trying not to turn over the ball as much and focusing on my defense as best I can -- but offense always comes to me, so that's never really been a problem."

In a game McCray-Penson maligned her squad for a lack of energy and overall maturity postgame, Matharu brought a level-headedness amid the Bulldogs' near-fourth quarter collapse. She was calm, cool and collected as she played out the final four minutes with four fouls.

After Ole Miss guard Donnetta Johnson airballed the Rebels' final look at a tie with the clock ticking under 10 seconds, it was Matharu who was twice fouled by a gaggle of opposing defenders as she helped the Bulldogs milk the final seconds of Sunday's affair.

With in-state eyes locked on the battle in Starkville, Matharu rose to the occasion with a Cash-like level of grit and ability. Donning the similarly-toned colors of the original 'Man in Black,' it was the minute guard that sent Ole Miss home in a pine box.