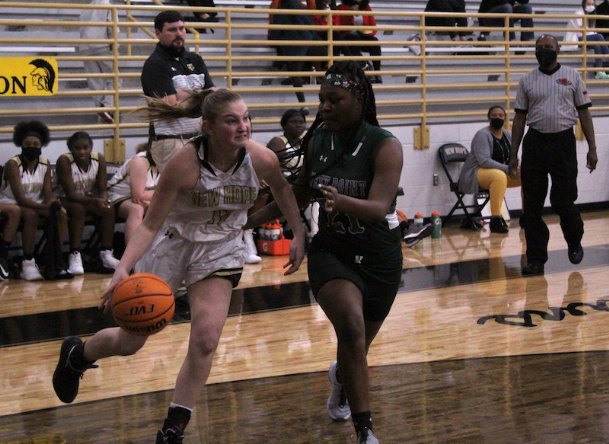 NEW HOPE -- As LJ Hackman's 3-pointer reached its apex and began to descend toward the basket, fellow New Hope High School sophomore Chris Allen put his head down and started to jog back down the court.

He knew what the result would be.

As Hackman's 3 landed in the basket with a swish to put the Trojans up 22-11 on West Point, Allen didn't even have to look back.

Neither did New Hope.

The Trojans erupted for 39 points in the first half and held the Green Wave to just 15 in the second as New Hope beat West Point 79-44 in Friday's MHSAA Class 5A, Region 1 opener.

"It felt good in the first district game coming out and getting a W," said New Hope senior Jorden Edwards, who had 26 points to lead the Trojans (9-2) to victory.

He helped orchestrate two massive runs that helped New Hope win its third straight game. In the first quarter, the Trojans stretched their early lead from 14-11 to 24-11; in the third quarter, they quickly went from up 41-31 to ahead 52-31.

Right in the middle of it was Edwards, who made big plays all night with junior big man Caleb Parr held out because of a nagging leg injury.

"He's been one of our top scorers all year," New Hope coach Drew McBrayer said of Edwards. "We needed somebody to step up with Caleb being out and injured. I thought Jorden did a great job of it tonight."

Despite the 35-point final margin, though, McBrayer pointed out the inconsistencies that were again on display for New Hope on Friday night. While the Trojans had no trouble scoring early on -- they put up 26 points in the first quarter -- they let West Point close the gap to 10 points at 39-29 at the half.

"I thought we played with no energy in the first half, which is very unlike us," McBrayer said. "Offensively, we did OK, but on the defensive end, we've got to be better than that.

Things certainly turned around in the second half after a "spirited" halftime message the coach delivered to the Trojans, but the incongruity still worried McBrayer.

The same issues held true for winless West Point, which played in just its second game since Thanksgiving break. Green Wave coach Gary Dixon said things quickly got worse for the young team thanks to turnovers and poor defense in the midst of New Hope's uncontested scoring stretches.

"We can't put negative on top of negative," Dixon said.

But Dixon still said he saw plenty of positives in West Point's performance, including hanging with a high-powered offense through 16 minutes.

"We had a good, good couple of practices over the Christmas break, and that translated into tonight," he said. "Even though it didn't come with the result that we wanted, I saw a lot of growth from before the break until now."

McBrayer hopes to see the same growth as the Trojans' season continues Tuesday against Grenada. With two games in each of the past two weeks -- including a 70-55 win over Houston last Tuesday -- New Hope is getting back on its regular schedule.

West Point played Okolona on Saturday night but will follow a similar schedule in district play beginning Tuesday at Columbus. The Green Wave hope to build on the good parts of Friday's performance as they do so.

"We can compete," Dixon said. "Now we've just got to start trying to put it together for three or four quarters."

Spilled onto the court at an awkward angle, Anna Prince pounded the floor with her right fist.

She knew she had the upper hand.

Late in the fourth quarter of Friday's game, the New Hope senior had barely gotten her shot off before she was fouled hard, hit in the shoulder by a West Point defender with whom Prince had just exchanged words on the other end of the floor.

A referee's whistle blew as Prince was knocked to the court. She landed on the baseline as her shot, remarkably, fell through the net. A few seconds later, she picked herself up and made the ensuing free throw.

New Hope did plenty of that in Friday's win. The Trojans' bench yelled loudly for nearly every bucket, most of all Prince's. That was by design, coach Nick Christy said.

"There have been some times where our players on the bench are, in my mind, not part of the game," Christy said. "They were being fans. They would just sit there, and if they weren't in, they were pouting.

New Hope did plenty of scoring in Friday's win, though perhaps not quite enough for a truly satisfying victory. The Trojans took advantage of a bevy of turnovers by a rusty Green Wave team in the first half but scored just 18 points while holding West Point to a mere seven.

Christy pointed out that New Hope players weren't driving the lane in order to kick the ball out, nor were the Trojans running the offensive sets they practiced.

"The score should have been pushed out more than it was, but instead of us taking advantage of our good defense, we were very lackadaisical on offense," he said. "We weren't pushing the issue."

But New Hope managed to keep the Green Wave at bay thanks in part to West Point's own struggles. Coach Demontez Calvert said his team hadn't played in nearly a month -- Friday was the Green Wave's sixth game, whereas in a normal season they would be on No. 13 or so by this time.

"There were a lot of things that we didn't do from an offensive standpoint and defensively as far as just executing," Calvert said. "If we clean up that, we'll be fine."

New Hope, too, has things it wants to tidy up. Prince listed offensive rebounding and defense as her main areas of concern after Friday's game.

"We played decent, but we can definitely do better," she said.

Starkville will host Greenville on Tuesday.

Jackson led the Falcons with 28 points and made five 3-pointers in a 50-37 Columbus win.

LOUISVILLE -- The West Lowndes girls picked up a big road win on Friday in Louisville by beating Nanih Waiya 57-28.

Quankeria Halbert had 19 points to lead the Panthers, and Tydajasha Hood scored 14.

Lillee Alpe paced the Volunteers with 25 points in the loss.

Starkville Academy will play at Lamar School on Tuesday in Meridian.

Oak Hill's next game is Thursday at home against Marshall Academy.

Audrey Foreman led the Rams with seven points, and Morgan Whitten had six.

JJ Williams scored 18 points for the Falcons. Bryce Billups had 16 points, and Willie Young had 12.

Trey Naugher led the way with 18 points as the Heritage Academy boys picked up a 69-47 home win over Lamar School on Friday.

Mack Howard added 13 points for the Patriots. Whit Altmyer had 12, and Jonathan Peal had 11.

LOUISVILLE -- Darrell Brooks had a big game for West Lowndes to help the Panthers to a big 63-56 road win at Nanih Waiya on Friday in Louisville.

Decamby Willis added a double-double with 20 points and 14 rebounds.

PELAHATCHIE -- The Starkville Academy boys picked up a 50-23 win Friday at East Rankin in Pelahatchie.

Jawon Yarbrough led the Vols with 12 points, and Cy Hallberg and Wiggy Ball each scored eight.

Joe Michael Edwards had 16 points in the Rams' 51-47 loss. Drake Shaw had 11, and Jackson Howard had seven.

Lauren Brown and Chloe Brewer scored goals for the Cavaliers.

Caledonia's next match is Tuesday at home against South Pontotoc.

NEW HOPE -- Reagan Greenhaw had a hat trick for New Hope in Friday's match at Nettleton.

Greenhaw scored all three Trojans goals in the 3-0 win.

Todd Sharp had the Patriots' only goal.

Starkville Academy's next match is at home Tuesday against Magnolia Heights.

Miller had a goal for the Vols, and Benjamin Wiley had two.

Aaron Verdell and Gustavo Lugo scored goals for the Falcons.

Columbus will play at Vardaman on Tuesday.

Dominique Bush had a pair of goals for the Yellow Jackets. Ethan Pulliam and Soren Haupt added a goal apiece.

Antonio Facella had the goal for the Green Wave. JaKobe Pate made four saves in goal.