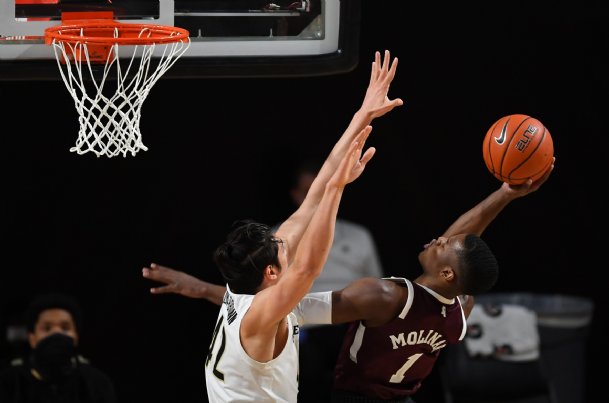 Mississippi State had perhaps its best inside effort all season Saturday but still had to hold on for dear life against Vanderbilt on the road.

The Bulldogs destroyed the Commodores 42-18 in points in the paint and shot 60 percent from the floor, but Vanderbilt countered by having a higher 3-point shooting percentage than its clip from the floor, converting 15 of 33 3-pointers. Because of the barrage of long-range shots, the Commodores (4-5, 0-3 SEC) stayed in the game and had a chance to tie or take the lead with 6 seconds remaining, but a key steal from freshman defensive specialist Cameron Matthews sealed a 84-81 victory for MSU (8-4, 3-1).

"I'm happy he got the steal," MSU coach Ben Howland said. "That was a huge play."

This is the second straight road game MSU has won against Vanderbilt dating back to the 2018-2019 season, which is significant considering the historical context: With Saturday's victory, the Bulldogs improved their record against Vanderbilt to 11-48 all time when playing on the road. MSU has now won eight of its last 10 games and is 7-2 with Iverson Molinar in the starting lineup.

"There's a great sense of understanding of everyone's role," Howland said. "Our guys really like each other. We have great leadership. Our guys support each other, and we have a great feeling in that locker room."

In Tuesday's monumental victory against No. 13 Missouri, it was Stewart who played the hero with a game-high 24 points. Saturday, Molinar took his turn as the caped crusader, chipping in a career-high 24 points on a 9-of-11 shooting effort while grabbing eight rebounds.

"I just try to stay what I'm doing right now," Molinar said after the game. "I don't want to force anything. There's a lot of talk on the outside, but I'm doing my best to put my focus on the court and help play as a team."

Stewart chipped in a modest 16 points himself Saturday, but Tolu Smith emerged as a consistent option with his best offensive output in SEC play, making 7 of 8 shots while grabbing seven rebounds. Smith's ability to create a clean look for himself and avoid double teams was a huge reason the Bulldogs dominated the inside game against Vanderbilt.

"It's a big factor in most games," Smith said of MSU's forward size. "We're usually bigger, so we try to be aggressive and take over the paint as a big factor for us to win."

"We went to the locker room, coach told us he felt like we were playing sluggish and not with the intensity we need," Smith said. "We came out with a better first five minutes in the second half."

Saturday's defensive lapses weren't quite as egregious as the 19 3-pointers allowed against Liberty in the Bulldogs' second game of the year, but the sixth-year head coach was still displeased with his team's perimeter defense.

"We came off guys at inopportune times, we have to learn from it because we play them again (later this season)," Howland said. "They're a great shooting team and (Vanderbilt is) a tough place to win."

Vanderbilt was led by Scotty Pippen Jr., the son of NBA Hall of Famer Scottie Pippen, who had a team-high 18 points and 12 assists for his first career double-double.