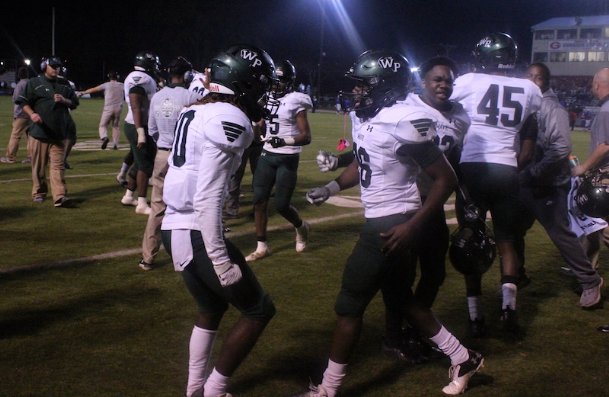 West Point defensive backs Joqwan Young (10) and Frederick McMillian (26) celebrate after McMillian's interception in the fourth quarter of Friday's game at Grenada. The Green Wave won 28-14 and will face Ridgeland on the road next Friday in the MHSAA Class 5A semifinal round. Photo by: Theo DeRosa/Dispatch Staff

GRENADA -- Bunched up in a power formation, a few inches away from the goal line, West Point needed no reminders.

The Green Wave knew what happened last time they faced a similar situation at Grenada High School on Oct. 16: The Chargers stuffed them on fourth and goal to win in overtime, 28-21.

With the Green Wave up a touchdown with four minutes to go, Cameron Young finally punched in the decisive score with less than four minutes to go after West Point was stopped twice at the 1-yard line. This time, there would be no heartbreak for the road team.

"We weren't going to be denied," coach Chris Chambless said.

It was the theme of the night as the Green Wave handled the Chargers 28-14 to punch its ticket to next week's MHSAA Class 5A north state championship at Ridgeland. The Green Wave have won five straight since losing back-to-back games against Lake Cormorant and Grenada.

"It feels good," Young said. "We're one step closer to our main goal."

That goal, of course, is the fifth straight state title and a public school-record 12th crown for West Point. After two straight losses, the "refuse to lose" attitude Chambless and his coaching staff have instilled in their players since seventh grade has shined through every Friday.

"We prepared really well all week," Chambless said. "We were mentally prepared for this game, and it showed. You're never going to play a perfect game. I felt like we got stopped a couple times when we could have kept going. But we won, and I'm 100 percent happy with it."

Once again, Young and the Green Wave's running game deserve a large portion of the credit. After five touchdowns last week, the junior had three Friday, including his clinching 1-yard score. With his first name, the No. 2 jersey he dons and the powerful stretch he made to inch the ball across the plane, Young looked more than a little like Cam Newton on the play.

Actually, though, he'd probably scored three plays prior. West Point's Hudl Sideline instant replay system showed Young had in fact broken the plane on a run for a first down from the 4-yard line, but he was marked down at the 1. Chambless said the Green Wave pulled up film of the next two plays -- both ruled short -- and saw that West Point should have been credited with touchdowns on both.

Instead, it fell to Young on third down, and he made good on the play -- thanks to superlative effort and the goal-line drills the Green Wave practice every week.

"When it comes to that nit-and-grit time, we've got to be able to score," Chambless said.

Though its run-heavy offense was occasionally curtailed by the Chargers, West Point seemed to be able to score whenever it really needed to Friday night.

Take the first possession of the second half after Grenada quarterback Joshua Phillips ran for a 25-yard score to put the Chargers up 14-13.

Chris Ivy carried for a big gain on West Point's first play, and Young then broke away for a 55-yard touchdown run to put the Green Wave on top for good.

All year, West Point has given possession of a wrestling-style championship belt to the player dubbed most deserving, and Young slung it over his shoulder after the final horn.

"Cam had a real big night for us like he always does," said Chambless, who also credited Ivy, JaKobe Pate and Keshawn Henley. "Our backs do really well."

But it wasn't just West Point's running backs who made the difference Friday night -- the Green Wave's secondary had a similar impact.

No player exemplifies that fight better than Frederick McMillian, a junior cornerback who missed all of last season with a torn ACL.

On the Grenada drive following Young's short-yardage score, McMillian made an interception look so effortless he seemed to be playing wide receiver rather than defensive back.

"'All that rehab and everything ... it makes everything worthwhile after making a play like that for us,'" Chambless told McMillian on the sidelines after the pick. "Fred's been steady for us all year."

With 3:19 to go, all West Point had to do was run out the clock, and Young credited McMillian for the big play.

"We knew our defense was going to get a stop for us," Young said. "That was just huge."

It gave West Point revenge over the Chargers and a date with the Titans in next week's north state championship in Ridgeland as the Green Wave moved closer to the goal they have yet to give up.

"We know when we're able to practice over Thanksgiving break, we're doing something right," Chambless said.

SARDIS -- Noxubee County moved one win closer to a MHSAA Class 3A title with a 39-14 road win at North Panola in Friday's quarterfinal game.

Noxubee County will return to Macon to host the Class 3A north state championship game Friday against Winona.

ALICEVILLE, Ala. -- Aliceville (Alabama) High School was eliminated from the AHSAA Class 2A tournament with a 55-14 home loss to Mars Hill Bible School (Alabama) on Friday in Aliceville, Alabama.

The Panthers opened up a 35-0 halftime lead to end the Yellowjackets' season with an 8-5 record.

Tyjarian Williams had a 59-yard touchdown pass to Jermaine Brewer to open the scoring for Aliceville in the third quarter, and Brewer ran for a 36-yard score in the fourth.

Williams was 11 of 21 passing for 162 yards. Brewer finished with 12 carries for 85 yards and was the Jackets' leading receiver with three catches for 98 yards.

Montreal Chandler added 14 for the Tigers. Jordan Jones and Awstyn McCloud each had six.

West Lowndes' next game is Dec. 1 against West Point in Columbus.

Senior Brody Pierce had two goals for the Volunteers (2-0). Junior Grant Smith scored on a penalty kick, and seventh-grader Nathan Miller also had a goal.

Starkville Academy's next match is at Strayhorn on Dec. 1.