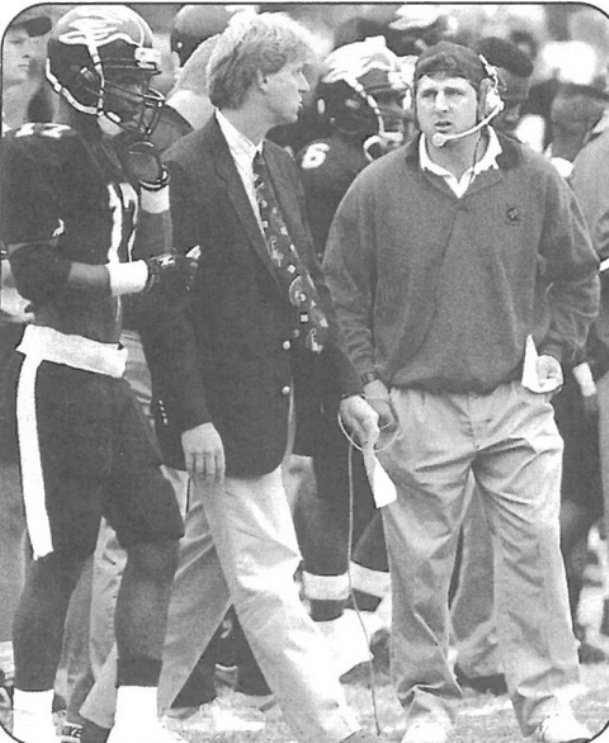 Head coach Hal Mumme (center) and then-offensive coordinator Mike Leach (right) on the sidelines at Valdosta State. The two coaches brought the air raid to the small Georgia school just north of the border with Florida. Photo by: Courtesy of Valdosta State Athletics

STARKVILLE -- Herb Reinhard sat in his home in the early months of 1992 and slipped a grainy VHS tape into his television.

Transitioning from his role as an assistant athletic director at Florida A&M to the athletic director job at nearby Valdosta State, a Division II school located 19 miles north of the Florida-Georgia border, Reinhard inherited a football program without a coach, as incumbent Mike Cavan had accepted the job at East Tennessee State.

With the familiar tones of John Mellencamp's "Small Town" blaring over highlights that, unbeknownst to Reinhard at the time, had been compiled as a fundraising video to aid in NAIA program Iowa Wesleyan's playoff game the previous year, he combed through all 48 Tigers passing touchdowns from that season. He was smitten.

"I watched it two or three times and I thought to myself, 'Wow, this is something that we can hang our hats on. I can sell this. I can market this in Valdosta,'" Reinhard recalled.

At Iowa Wesleyan, head coach Hal Mumme had just concluded his third season running circles around NAIA defenses in the southwest corner of the Hawkeye State. Having orchestrated a 10-win turnaround in just three years courtesy of a high-flying passing attack later dubbed "basketball on grass," he was preparing to move up the ranks.

Ahead of Christmas break, Mumme's mercurial offensive coordinator approached him about the Valdosta State job.

"When you send me to Florida recruiting, I drive right through Valdosta," a 30-year-old Mike Leach said. "I've stopped off there a bunch of times. They have a swimming pool right next to the coach's office."

Intrigued by the idea of a pool next to his office, Mumme told Leach to have his resume mailed to the school despite premonitions that a Georgia native might be preferred.

By February 1992, Reinhard had hired Mumme as the fourth coach in Valdosta State history. Leach came along as the offensive coordinator. In five years guiding the Blazers, the pair helped the program to a 40-17 record and launched the air raid into college football's mainstream.

As for the pool, Mumme conceded through a laugh it was an added bonus.

"It was a great recruiting tool," he quipped. "... If we could have had signing day in May, we'd have gotten every kid in the state of Georgia."

The walls of Betty's Diner have worn over time but still glimmer with the memories of years past.

Opened in 1950 as Bynum's Diner and altering its name due to a change in ownership during the early 2000s, the local watering hole serves as a gathering place for Valdosta State boosters past and present.

During Leach and Mumme's tenure, the pair ate breakfast at Betty's every Thursday morning while holding court with local fans. Current Valdosta State head coach Gary Goff, who played for Mumme between 1993 and 1996, still pokes into the eatery regularly to dine with boosters.

"You better have thick skin, because they're going to ask you exactly what's on their mind," Goff noted through a chuckle.

Upon Leach's and Mumme's arrivals, much of Valdosta's storied football tradition had been reserved for its high schools. Bitter crosstown rivals Valdosta High School and Lowndes High School have combined for 29 state championships, while the former also claimed six national championships between 1962 and 1992.

Hoping to drum up interest for a largely dormant college program, Mumme organized a coaching clinic during his first spring on the job with a slew of NFL and college coaches set to speak. No one showed. Instead, the coaches sat in circles in the gymnasium and taught one another.

"The people in Georgia, when we first got there, they weren't too fired up about us," Mumme said. "These guys from Iowa and they're going to throw the ball all the time -- that was heresy."

"In Georgia, growing up, you're used to three yards and a cloud of dust," Mississippi State offensive line coach and former Valdosta State running back Mason Miller added. "And we were throwing the ball everywhere."

Initial support aside, the opportunity at Valdosta State was a welcome one for Mumme. During his first summer in south Georgia, he recalled how he'd head out to the practice field simply to admire the Bermuda grass that had been installed.

"We'd been coaching in Iowa basically on a cow pasture," he said, only half-kidding. "We were just in love with the grass."

Early returns in the Mumme era were mixed. Former quarterback Chris Hatcher, who played at the school from 1991 to 1994 and currently serves as head coach at Samford, noted Mumme's way of doing things was a far cry from Cavan's staff. So different, he joked, even the simplistic air raid had to be dumbed down a touch.

"I tell people all the time I'm the guy -- not Hal Mumme and Mike Leach -- I invented (the air raid) because I wasn't smart enough to do all the things they wanted to do," Hatcher said, laughing at the thought.

After a 5-4-1 opening season, Mumme's and Leach's squad found its footing during an 8-3 1993 campaign. An 11-2 third season culminated with the school's first ever Division II playoff appearance. A second followed two years later.

"I think part of it is we started doing some good things at Iowa Wesleyan, and then of course we continued at Valdosta," Leach said Wednesday. "I thought we got a lot accomplished, but also it was a great learning point, development in my career."

For a coach whose antics boast their own lexicon of sorts, the Valdosta State years offered among the earliest looks at Leach's captivating personality.

Walking into Leach's office hoping to ask about a specific play, Goff was greeted by the youthful offensive coordinator and a desk covered in papers, binders and other varying tchotchkes. The only thing hanging on the wall? A picture of the Apache warrior Geronimo.

"You know, Gary, Geronimo, he would lead his troops across the desert with just a little bit of water in their mouth," Leach said, launching into a sermon on the famed Native American leader.

Leach's quirks weren't reserved to the offices. Splitting a handful of happy hour appetizers at the local Ruby Tuesday's one night, former Valdosta State strength coach Michael Doscher wandered out to the parking lot only to discover his wife's car had been stolen.

"My brand-new pullover was in that car!" Leach cried out, seemingly unconcerned with the missing vehicle. "They stole my pullover!"

Around the corner, the group found the car still running and were informed it had been used to transport a group of thieves who'd broken into a nearby jewelry store. Upon discovering the thought-to-be-stolen car, Doscher flipped open the trunk to reveal Leach's missing pullover.

"Yeah, well, I didn't lose my car either," Doscher retorted.

A little over a year after Reinhard hired Mumme, his wife, Linda, approached Mumme at a Christmas party.

"You know, I knew you were going to get this job," Linda said.

Pointing toward a familiar videotape perched beside the television, Linda responded, "My husband would come home after all those committee meetings, and he'd put this tape in, and he'd sit here and watch it."

Selling tickets and an offensive system that has since become synonymous with the school, slews of Mumme and Leach disciples with connections to Valdosta State have ascended the college football coaching ladder.

Hatcher served as the head coach at his alma mater between 2000 and 2006, winning two Division II national titles. Houston head coach and former Iowa Wesleyan product Dana Holgorsen served in a handful of roles for Leach and Mumme during the early 1990s. Former South Carolina head coach Will Muschamp and Georgia head coach Kirby Smart -- whom Leach will face Saturday in Athens -- even spent time at Valdosta State as assistants on Hatcher's staff.

Goff remains particularly close with Leach. During the coaching search that brought Goff on board as the head coach at Valdosta State in 2019, Leach made a phone call to Reinhard on his behalf.

"The great thing about (Leach and Mumme) is it didn't matter at Valdosta State if we were fixing to line up against the Atlanta Falcons," Goff said. "They both knew we were going to win, not hoping to win. And because of that, they really fed that to the program and to the team."