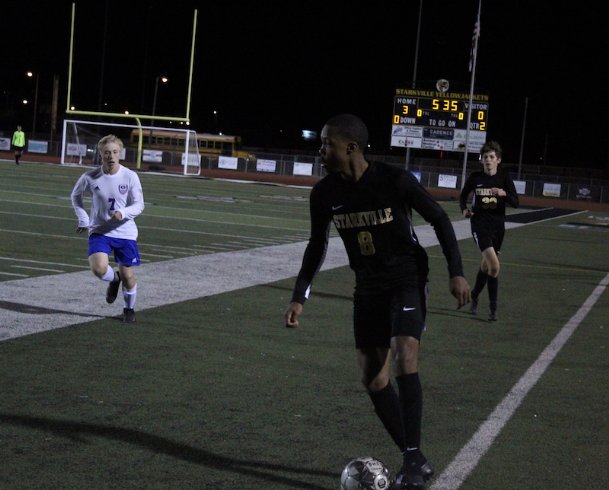 Starkville High School sophomore Ethan Pulliam (8) dribbles the ball late in the second half of Thursday's home match against Grenada. Pulliam had all three goals for the Yellow Jackets within 10 minutes. Photo by: Theo DeRosa/Dispatch Staff

Starkville High School sophomore Emma Wilson (14) prepares to take a shot in the first half of Thursday's home match against Grenada. Wilson's shot was saved, but she later scored in the Jackets' 4-0 win.
Photo by: Theo DeRosa/Dispatch Staff

When the Starkville High School sophomore reentered Thursday's home soccer match against Grenada a little more than midway through the second half, he hoped to break the scoreless tie with a goal to give the Yellow Jackets a boost of energy.

Pulliam delivered more than that.

As promised, he scored, cashing in a breakaway chance in the 64th minute. Then he scored the 66th. And the 73rd. Less than eight minutes later, Pulliam had pulled the Jackets (4-1) to a 3-0 win over the Chargers.

"With him, you've just got to be ready," Starkville coach Evinn Watson said. "Sometimes he'll click it on like that, or sometimes he'll hold off. It was lucky that he was on tonight."

A standout punter on the football team and a Mississippi State baseball commit, Pulliam doesn't just deliver on the soccer field, and Watson knows it.

Thursday, Pulliam's clutch play earned him a new moniker from his teammates. As the sophomore queued up with Watson and a few teammates, senior Connor Davis shouted the nickname to anyone who would listen.

It was a fair sobriquet for Pulliam, who completed the feat with a nifty back-heel tap-in precisely nine minutes and one second after his first score of the night.

While Pulliam, when asked to choose, singled out his third tally as his best Thursday, it went without saying that his opening score proved the most important.

As soon as the sophomore went to the right to beat Grenada's goalkeeper, Watson swung his glance to the other Chargers on the field. Then he looked back at his own bench. It was time.

"They're deflated, guys," Watson told his players. "This is when we need to put it on them."

After the goal, Watson reconfigured Starkville's formation to give Pulliam help on the left side. The sophomore rewarded his coach within three minutes on a laser from close range on that side of the goal, somehow fitting his rocket of a shot through a tight window into the net.

"Man, he has a powerful left foot, and we love to get him in when we can," Watson said. "He did a great job tonight getting into open space and putting the ball in the back of the net."

Starkville's first goal finally opened things up -- Pulliam noted it visibly pumped up home fans, players and coaches alike -- after the Chargers flummoxed the Jackets in a hard-fought, goal-free first half.

"We weren't ready for these guys," Watson said. "They played a little different kind of soccer than we were used to seeing. It took us a little bit of time to get adjusted."

The latter sentence could apply to Pulliam, too. With Starkville's football season coming to an end just two weeks ago, the sophomore is still acclimating to soccer conditioning. Consequently, he's still coming off the bench.

"I think if we can get him acclimated to the conditioning and touches on the ball and stuff, I think he'll be able to move up to a start in the future, for sure," Watson said.

But there's no rush as Starkville continues to roll through its non-region schedule. With the team's next game coming Dec. 30 at Pontotoc, Pulliam and the Jackets will have plenty of time to enjoy what Thursday brought them.

"We had to get back into the groove of things, and I think this is going to keep us flowing on," Pulliam said.

Sure, the Yellow Jackets already had four goals to their name in Thursday's match, but why not add a fifth in the closing seconds?

Elder's kick, ultimately, tailed wide left. But it hardly mattered. Though missed chances like Elder's were common throughout the second half, Starkville (2-2) had played well enough to be not only pleased with a 4-0 shutout win but hoping for an even bigger margin.

"I was happy with how our girls moved the ball," Phillips said. "Got to work on getting the ball in the back of the net more, but we have increased our shots on goal from previous games, so I'm happy about that."

Veronica Dunne opened the scoring for the Yellow Jackets off a corner kick in the 17th minute. Emma Wilson doubled the lead in the 52nd, and Skyler Miller and Meg Rodgers added second-half goals.

"Some girls stepped up, so I'm super proud of them," Phillips said.

Among them was Wilson, a sophomore playing her first year of high school soccer. She scored twice in a win over Caledonia on Saturday but didn't expect to add to that tally Thursday -- until she cleaned up a loose ball in the box to push the Jackets' lead to 2-0.

"It felt really good," Wilson said. "I was really surprised, honestly, because I didn't think I was going to score."

Unfortunately for Starkville, Wilson's ability to corral the rebound and drive it into goal was rare Thursday night. In the second half, a dozen or so shots dribbled past the goal line or banged off the crossbar rather than finding the back of the net; Phillips said her team will have to work on its game in the attacking third in order to get shots on target and follow up on second chances.

Still, the Jackets were able to win handily and control the match, and Phillips said their improvement was evident.

"Overall, keeping possession of the ball was a lot better this game," she said.

Alexus Gillian had the only goal for the Falcons.

Columbus' next match is Dec. 1 vs. West Point.

The Heritage Academy girls beat Magnolia Heights on Thursday for their first win of the season.

Lucy Sharp had 12 points for the Patriots, and Chloe Boyd had eight.

Allison Pennington had 20 points for the Cavaliers, and Tenyzia Lathan had 11.

Caledonia's next game is Dec. 1 against New Hope.

Morgan Whitten scored 11 points for the Rams. Faith Yeates had nine, and Cayden Harding had eight.

Columbus Christian's next game is at home against Calhoun Academy on Nov. 30.

The Heritage Academy boys earned a 67-45 home win over Magnolia Heights on Thursday.

Trey Naugher scored 24 points for the Patriots, and Whit Altmyer had 16.

Elijah Young led the Green Wave with 14 points. Jarion Cunningham had 11, and DJ Willis had nine.

Noah Laymon had 11 points to lead the Rams in the losing effort. Tyler Looney had nine, and Drake Shaw and Joe Michael Edwards each had eight.

Oak Hill's next game is Dec. 1 at home against Starkville Academy.