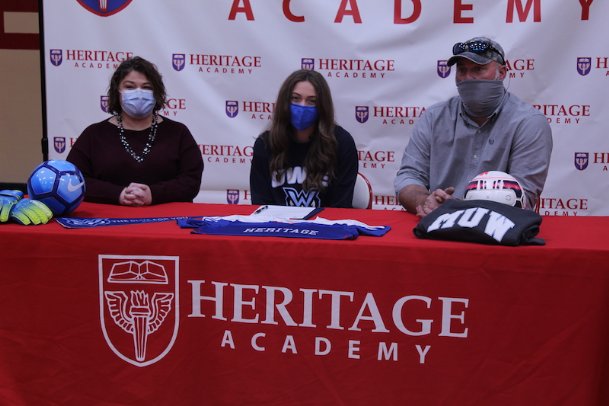 Haven Tuggle, pictured with her parents, Shelley Tuggle and Jonathan Tuggle, signed to play soccer at Mississippi University for Women on Thursday. The Heritage Academy senior goalkeeper hopes to play the same position in college but is willing to contribute in the field if needed. Photo by: Theo DeRosa/Dispatch Staff

The first time she played the position -- pressed into service in a Columbus United under-12 game when her team's regular keeper got kicked in the throat -- the score was lopsided. When the ball was at the other end of the field, Tuggle sat in the grass and picked flowers.

It was an inauspicious introduction for a player who went on to star at the position at Heritage Academy. For at least the past two years, Patriots coach Tom Velek has consistently referred to Tuggle as one of the best high school goalkeepers in Mississippi, if not the best.

But now, Tuggle will get a chance to "start back at the beginning," Velek said.

On Thursday morning, Tuggle signed her letter of intent to continue her soccer career at Mississippi University for Women, a strong program with plenty of talent at goalkeeper. Tuggle will have to earn her way into playing time, but that's a challenge she's willing to tackle.

"I think it'll be a good fresh start," she said.

For Tuggle, The W will be plenty more than that. Its nursing program presented a natural fit; its proximity allows Tuggle to keep her home close.

"Since I'm at home, I can always come and see my family," she said. "It's not like if I forget something at home I can't go back and get it, whereas if I moved states or towns, it would be harder for me to come home during the week and visit my family or come home and get something if I needed it."

She'll also have a chance to continue her relationship with Velek, who has coached her for 11 years. Tuggle was part of Velek's first-ever under-8 development program with the Columbus Soccer Organization and one of his first players at Heritage Academy when he took the job five years ago.

"Haven has just been a really steady part of that team for the last five years," Velek said. "It's been a pleasure to coach her."

In addition to his boys and girls coaching relationships, Velek is a professor at The W, and although he and Tuggle have agreed she'll never take one of his classes -- she said history isn't her forte -- he'll be there for guidance.

"Freshman year can be very difficult to transition, so I know she knows she can always reach out to me," Velek said.

Velek said Thursday was a great day for both Tuggle and MUW -- and a tough one for Heritage Academy's program.

"I know she and her family have worked toward this for a very long time, and I just could not be more proud of her but also sad that we're seeing her go from this team, because she's been a big asset for the last five years," Velek said. "... She leaves a big hole that we're going to have to fill next year. Part of me is very happy for her and very excited for this next chapter in her life. There's another part of me that is like, 'We've got a big gap to fill.'"

In fact, the Patriots will have two such gaps. Jonathan Tuggle, Haven's father, has served as Velek's assistant coach while his daughter played for Heritage Academy. Now, both are moving on.

"Losing her means I lose my assistant that I've really enjoyed working with for five years," Velek said. "He's been a great asset to the team."

Jonathan Tuggle said he's served as assistant and head coach for his daughter at different times over the years and has gotten to watch Haven grow and mature in the process.

"I've been on the soccer field with her pretty much her whole time and haven't missed much," he said. "It's been a joy."

For Haven Tuggle, it's also been a dream several years in the making. Around her freshman season, she began to attend ID camps and research colleges. It drew her to a singular conclusion: She was good enough to keep playing.

"I realized I did have the talent," Tuggle said. "It wasn't just a, 'Oh, you're a nonchalant kind of person. You're a D-II player.' You can go and do bigger things with yourself. If you want it, you have to go for it."