Surrounded by family in person and in spirit, Reggie Perry returns to his roots on draft night 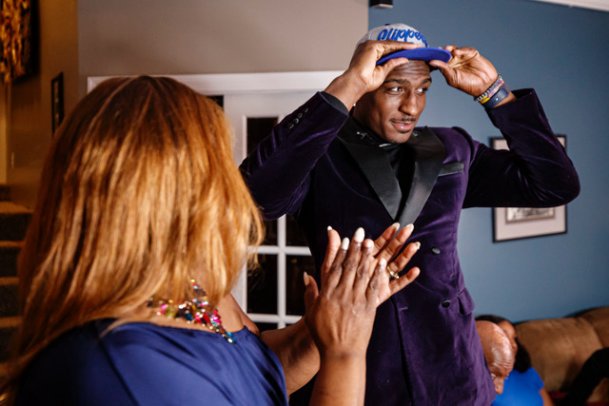 Mississippi State forward Reggie Perry dons a Los Angeles Clippers hat after being selected by the team with the No. 57 overall pick Wednesday night. Perry, though, won't play for the Clippers; his draft rights were traded to the Brooklyn Nets instead. Photo by: Austin Perryman/MSU Athletics

STARKVILLE -- Reggie Perry glanced down at the glimmering pendant dangling around his neck.

Residing in a fist-sized pendant embroidered with diamonds and resting squarely in the center of his chest Wednesday night was a photo of Dorothy Williams-Wesley, Perry's deceased grandmother.

"I got this to keep her in the room," he said. "She was with me the whole time."

While Williams-Wesley was not physically present, her spiritual representation coupled with the more than 20 friends and family members that gathered at a rental house mere minutes from Humphrey Coliseum shone as Perry was selected with the No. 57 pick in the 2020 NBA draft.

"Just a proud dad now, ready to move on," Al Perry, Reggie's father and an assistant coach at Mississippi Valley State, said. "(Former NBA coach) Sam Mitchell always said, 'It's easy to get drafted; it's tougher to stay.' So now we've got to stay."

Though Wednesday's festivities proved a celebration, the night was wrought with tension. From the moment family members poured into the living room beginning around 6 p.m., there was an eerie silence to the space as ESPN's draft coverage blared on a flatscreen television at the forefront of the gathering.

Seated on the couch beside Al, who played at MSU during the mid-1970s, and his mother Kim, Reggie Perry glared into the television with growing anxiousness.

In the kitchen to Perry's right, hats from every team in the league resided on the marble bar top. One by one they were whisked away as the picks cycled through. Next up.

Seated beside the bar, Perry's uncle Reggie Neal slowly sipped on a cool glass of Gentleman Jack in hopes of easing the growing tension. A trio of Perry's Omega Psi Phi fraternity brothers also briefly exited the house before returning with two 24-packs of Corona.

After MSU teammate Robert Woodard was selected with the 40th overall pick, a slew of scattered claps filled the room. Perry's phone began buzzing incessantly. Initially mocked where Woodard was chosen, there was a growing expectation his name would be called. Perry's agent insisted the New Orleans Pelicans liked him with the 42nd overall selection, but they instead chose to ship their choice to Charlotte.

"This is crazy, man," Perry said softly as he palmed his face in frustration.

As the final few picks of Wednesday's draft trickled in, name after name was called. Perry's was not.

"Welcome to the family and have a good time (tonight)," Marks told Perry.

With the news subtly spreading about the room but not revealed in total as the broadcast lagged behind, Neal grabbed a hat from the stack of discarded lids and hid it under his suit jacket so as not to allow an inkling of where his nephew was headed. Minutes later, NBA deputy commissioner Mark Tatum read Perry's name aloud. He'd been selected by the Los Angeles Clippers and subsequently shipped to Brooklyn in an already agreed upon draft night trade.

The room rejoiced. The gathering that felt funeral-esque for four-plus hours suddenly turned jovial. Perry embraced his mother and father. Handshakes, high-fives and hugs followed throughout the room. Stepping away from the commotion, Al Perry cracked open a fifth of Jack Daniel's Tennessee Fire and poured himself a stiff drink.

"That's really why I was nervous," Perry said, referencing his gathered friends and family. "I just wanted to make them proud. I didn't want to make them trip (out)."

Draft night's perpetually serve as a crapshoot of sorts, but there was a layer of fate in Perry's landing in Brooklyn.

For a family whose home has shifted south over the years, there's a familiarity in New York City and its eccentricity. Neal and brother Kendall, who was also in attendance Wednesday, grew up in Brooklyn. Al himself is from Harlem.

"I know he's a southern boy," Reggie Neal said through an ear-to-ear grin. "But his roots are in New York."

Over the next few days, Perry will head to Brooklyn with little more than a month before the NBA season is set to start. After a two-year spell at the school his father played for, he now returns to the city that bears his roots. And while his grandmother couldn't be there to see it in person, Perry noted through bated breath, she was watching from above.

"She told me, 'Just make me proud; just keep your head on straight,'" he recalled of one of their final conversations. "I can still hear her voice saying it."