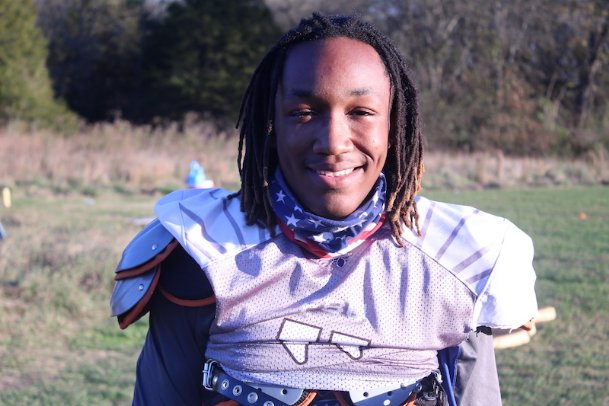 Noxubee County senior wide receiver Macardi Johnson has taken it upon himself to be a leader for the younger players at his position. He's also lining up at cornerback for the Tigers for the first time since his freshman year. Photo by: Theo DeRosa/Dispatch Staff

"Stay in the playbook and stay in the schoolbook, and you'll be alright," Johnson was told by past Tigers standouts like Rashad Eades and Kyziah Pruitt.

This year, as Noxubee County's only senior wideout, Johnson has made efforts to pass that lesson to the Tigers' younger pass-catchers.

"He took it upon himself to be a leader, and it's showing up," head coach Teddy Young said. "It's showing up in the way the younger guys are playing and the way he's playing on both sides of the ball."

While Noxubee County's defense remains as dominant as it has been all season, it's improvement from Johnson, the team's younger wide receivers and quarterback Chrishaad Rupert that have the Tigers prepared for Friday's MHSAA Class 3A quarterfinal at North Panola.

"We're clicking," Young said. "At this part of the season, you need to be playing your best football, and I feel like we're getting close to playing our best."

Noxubee County isn't all the way there yet, Young said -- 85 or 90 percent rather than 100 -- but the Tigers are fast approaching. They've posted 54-6 and 32-8 home wins over Byhalia and Booneville, respectively, in the postseason's first two rounds.

Young said Rupert, a converted wide receiver in his first year at signal caller, has improved -- and with him, so have the Tigers.

"I think that's the main reason why the offense is taking off now: because our quarterback's playing better," Young said.

But Johnson's impact on Noxubee County's receiving corps can't be understated. The senior makes sure players like AJ Little, Antonio Fowler and Dequadrion Welch remain focused on football, whether that takes the form of texting them reminders to watch film and study their next opponent or intervening in the classroom.

"When they're doing wrong, I have to help them out and make sure they stay on the right track," Johnson said.

Young said what Johnson learned from Eades and Pruitt as well as last year's senior wideouts, including Kobee Lockett, Jaqualon Sherrod and Jeffery Malone, showed him what he would need to do this fall.

But Johnson's impact isn't only being felt on offense for the Tigers. For the first time since his freshman season, he's lining up on cornerback, too. Even after two years off, he remembers how to play the position -- and how much more conditioning he needs than do his teammates.

"Even though they get to jog, I know I've got to sprint and get in better shape because I'm going to be starting on both sides of the ball," Johnson said.

Though he admitted he likes playing wide receiver better, Johnson said he'll do whatever is asked of him on both sides of the ball. That includes playing through fatigue if necessary.

Johnson, of course, is joined by 10 other dominant players on the Tigers' flat-out nasty defense. With a forfeit win over Aberdeen excepted, Noxubee County has allowed just 8.9 points per game.

"I told these guys all year going into the spring, 'If we want to get back to the state championship game, we'll have to rely on our defense,'" Young said. "They've been playing lights out lately."

The Tigers will have to keep that success going against a dangerous North Panola team that has scored 45 and 41 points, respectively, in playoff wins over Aberdeen and Nettleton. Noxubee County linebacker Trillo Brown Jr. didn't mince words in describing his team's plan of attack for signal caller Q.D. Walls and the Cougars.

"We're going to blitz the quarterback all night," Brown said.

Brown said he feels good about his team's game plan and knows how North Panola will try to attack, but it won't be easy to stop receiver Carl Robinson and the Cougars' passing attack.

"That's a big task," he said. "The secondary's got to hold up. I know our defensive line's going to provide pressure, so I think we'll be OK."

With a chance to host the north state championship game against the winner of Friday's Amory-Winona contest, the Tigers are ready for their road test in Sardis, Young said.

"We know what's at stake," the coach said. "Our guys feel like we're very prepared mentally and physically, so we've just got to go out and play."