How West Point football has built a running back dynasty 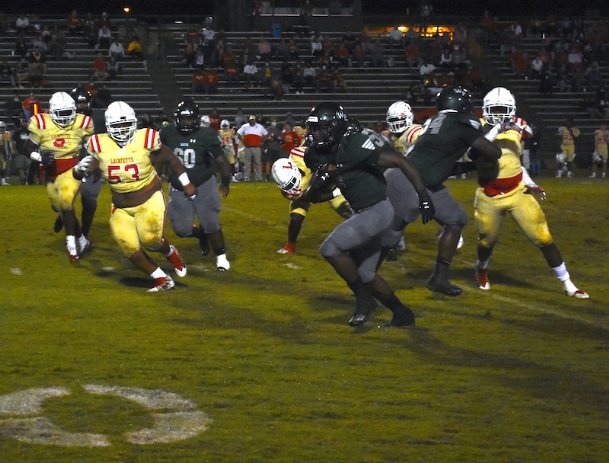 West Point running back Cameron Young (2) carries the football against Lafayette on Sept. 25. The junior is one of the leaders of this year's Green Wave rushing attack, which has led West Point into the second round of the playoffs and could take the Green Wave further. Photo by: Garrick Hodge/Dispatch file photo

In the summer between his freshman and sophomore years at West Point High School, the running back took note of the physical improvements he had made. How he was able to run faster; how he could lift more weight.

"Your time's going to come," Pate told himself, trying to be patient.

Now, for the senior, it has. Pate, a senior, is part of the Green Wave's "four-headed monster," a quartet of running backs that also features Cameron Young, Chris Ivy and Keshawn Henley and that has led West Point into Friday's MHSAA Class 5A second-round game at Grenada.

Pate's transformation is hardly unique among West Point rushers in recent years. Coach Chris Chambless and the Green Wave have fostered a running back dynasty that persists year in, year out -- an empire that has carried West Point to four straight state titles and hopes to secure a fifth.

"We know it takes a special kind of individual to run the ball and be mentally tough as well as physically tough," Chambless said. "Our coaches do a great job of developing the right skill sets that we need to be able to do so."

As soon as West Point students hit seventh or eighth grade, Chambless and his staff began to evaluate their talent. A longstanding history of success helps recruit, too; with 11 state championships, the Green Wave are tied with South Panola among Mississippi public schools all time.

"This is a good spot for athletes, but it's more the tradition: kids coming up from elementary school wanting to carry on the tradition of the teams that they've seen," Chambless said.

Young, a junior who scored five touchdowns in last week's 42-28 first-round win at Holmes County Central, pointed to West Point's second of four championship teams in 2017. Then, he watched guys like Chris Calvert and Marcus Murphy lead the Green Wave to a 15-0 season and a win over Hattiesburg in the state title game.

The Monday after that, the Green Wave did what they do every year: They got right back in the gym.

Yes, Chambless' offseason routine starts as soon as the regular season draws to a close. It never stops: West Point practices from 1:15 to 3 p.m. Monday through Friday year-round.

"It can be really grueling," Chambless said. "A lot of times, we have just as many injuries in the offseason as we do in season just because of the fact our kids go at it so hard in the weight room and outside on the field doing drills."

The Green Wave coaching staff focuses not just on physical fitness but mental toughness as well. Through competition -- pitting players against each other in anything from wrestling to running -- West Point hopes to push its players past the hang-ups in their head.

"When their mind says no, their bodies can still go," Chambless said.

And with all that time spent together, it's no surprise West Point's players grow close -- its running backs in particular.

"It's amazing to see how all those skill guys pull for each other," Chambless said. "It's almost like it doesn't matter which one gets the carry as long as one of them gets the tote."

Perhaps no duo embodies that mentality better than Pate and Young.

"That's my boy," Pate said. "When he scores, I score. When I score, he scores. How he goes, I go. When he runs the ball hard, I run the ball hard. We're just like bread and butter."

And while Young had the lion's share of scores against the Jaguars -- although he didn't even realize the extent of his performance until afterward -- Chambless said it could have been Pate, Ivy, Henley or another rusher.

"We feel like at any given moment, any of our backs can go score with it," Chambless said. "(Young's) number was called, and he made the best of it."

Chambless said Young is well liked by teammates and carries a "quiet strength" into each game, trying to improve week by week.

"He has no enemies that I know of -- except on Friday nights, the teams we play," the coach said.

In fact, West Point's whole team might be just as close as its running backs are. Chambless said the Green Wave preach a simple saying: They play like "11 brothers" every Friday.

That's why, after West Point lost at Grenada on Oct. 16 -- a shocking second straight defeat -- the whole team was emotional together. They knew they struggled with ball security and missed an opportunity to extend the game in overtime.

"It's hard to beat a team twice," he said. "The first time, there were some things that we did wrong that we corrected since then. I think we're ready."

And when West Point takes the field again Friday, Young will be thinking about the guys who came before him -- Calvert and Murphy -- as well as those whose time is still to come.

"They built it for us," Young said. "It's up to us to build it for the young kids to keep it going."